Okay with CincyCon in just a few days you all know by now that I placed my Saurus Knights on back  burner and I've been working in a chaotic environment the last few days (baby sitting grand kids, a dog, etc.) trying to finish these last couple of Samurai Cavalry for the game I am going to present.

I am leaving tomorrow and I am pleased to annouce that I actually finished them today! Yeah me! Seal coated and all.

I am also showing the figure I presented a few days ago with a finished base. The Samurai Cavalry I chose to paint are part of Yamagata Masakage's clan. Though I had already finished the sashimono's in a cream color thinking I was going to paint them something else. So you will forgive me if they don't show a white mon on a black background. But time was a factor as well as decal choices for mon, so change-o presto I will call it artistic license;)

Here are the photo's:

First up are my boys rocking it in a wild charge (images and sounds in Japanese of Hold the line! Hold the Line!, think of the movie Gladiator)! 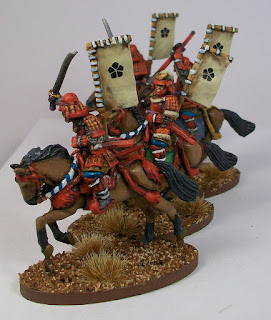 Next up a few shots at different angles 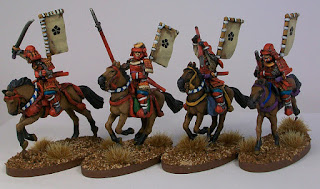 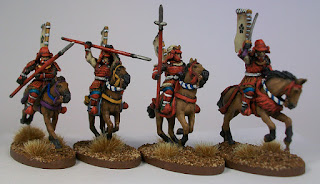 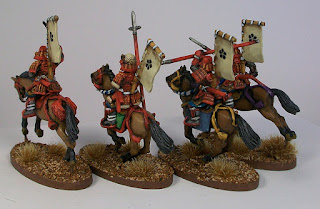 ...and lastly the figure I showed a few days ago that I was going to use as a proxy figure for a sub general on his finished base. 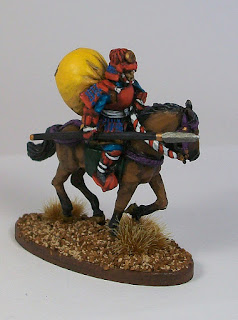 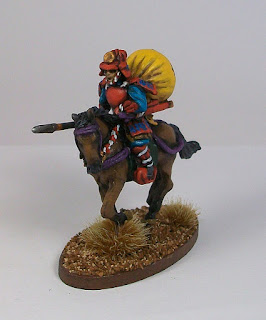 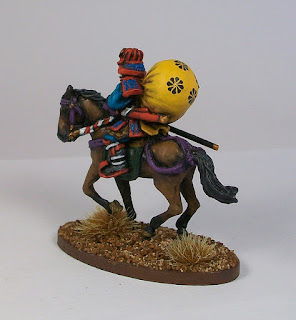 Off to CincyCon I go, I will try to take some pictures of games down there.

Okay my Saurus riders have been set to the side, temporarily only, because my ex-friend from Georgia has quilted me into painting some more Samurai.

Seriously though, he is not my ex-friend.... yet.... and I have set aside the Saurus riders to paint a few more Samurai for our event. I need another four Cavalry, and a General. Perry Miniatures makes these cool messenger riders that I was going to paint up one day and make up my own house rules to incorporate them into my Saga games. What better moment than now to paint one of them up and call him a General (Warlord in Saga). This will also keep my real nice vignette of one of my Samurai Warlord's from being crushed by players at the convention.

Too much going on with my paint table so I didn't get out my light box to take pictures and the lighting wasn't that great, but it's good enough to give you a quick peek at what I came up with for one of my Warlords that should be pretty durable in unknown hands. 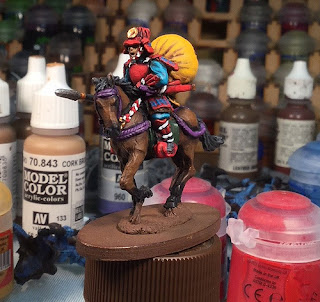 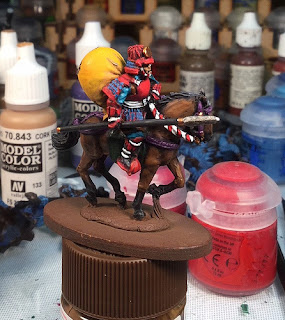 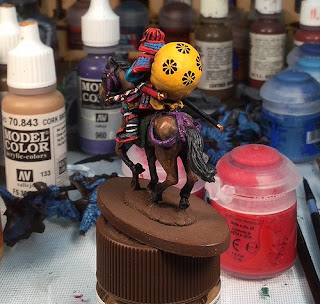 Well that's it for now, some flocking and four riders too paint for my Cav unit (I painted the horses up today as well).

Man have I been depressed of late. It's gotta be this stinking weather. Have a foot of snow on the ground and now it's raining. Yesterday it got warm enough for me to get outside and go for a spin on the bike. Felt weird with snow all around me, but the roads were clear. With the rain today, and then next couple of days (they are forecasting), along with the snow melt, it's going to be flood city and that means no bike riding for me. So maybe that's why I am so depressed.

I must look at this in the positive though. I can sit in a small room, look outside my window and see the gloom and paint tiny soldiers. That doesn't sound very uplifting does it.

Okay let's try again.... with Spring in the air and visions of the warm sun bathing our beautiful world I will sit in front of my paint table and paint very cool toy soldiers!

Okay the real reason for this post then, here is how far I have gotten on the Saurus riders and hopefully I can finish these up by next week so I can put together the Hero who rides a Carnosaur. Now that should get the artistic juices flowing. 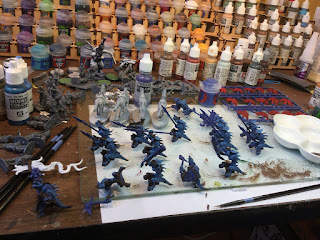 Well I got the riders for the Cold ones primed while still on their sprues and then proceeded to cut them out, clean them up a bit, and then glue them together. I got 10 done today and in between I assembled and glued together another sorely needed paint rack. Then Grandfather/husband duties raised it's head and I'll have to continue building the other five tomorrow. 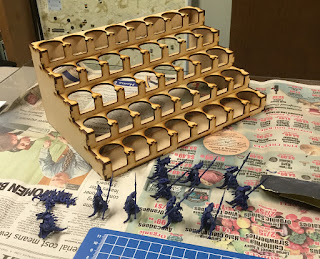 Once I get those put together then I have to mount them on my metal paint rods and then off to the races. Well that's it for now.

Well forget everything I said about speed painting. Other than doing the base coat with a rattle can and then drying brushing a few highlights, I sat down for the long siege of picking out the other details. So in a sense it was speed painting for me, but not in the sense I've seen some of you boys (you know who you are) do.

The biggest thing I've done is force myself to sit down every day, except one because of babysitting sick grand child, and though it's taken me til today to get the Cold One mounts to this point, I am pretty satisfied.

Now I may need to do another resin water coat affect stuff thingy, and clean up the edges of the base, but otherwise I am reigning myself in and keeping from trying to do more. You gotta know when to say stop. It's okay the way it is, if you keep going you'll just screw it up. My thinking about the way I paint anyways.

Tomorrow I'll be putting together the riders, then priming, and later this week start painting them. Then my plan is to tackle the General that rides this huge beast. These will be my core units, after the General is done I get to pick out fun stuff to paint to beef up the army.

While the hand is hot I gotz to keep on rolling those dice. 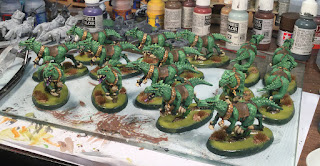 Well so much for my speed painting, things are slowing down now as I start to pick out the details. Though the green applications did go faster with the rattle can and then dry brushing. It did save me some time.

Today I applied the gold around necks (they'll eventually look Aztec like after a brown wash and some highlights), brown on the saddle furniture, and bone color on the claws etc I stayed away from doing the teeth as I have other work to do around those massive jaws and the teeth have to be last

My granddaughter has the flu, so tomorrow I may not get a chance to paint as I'll have to don my hazmat suit and go watch her for a bit while her parents continue about their lives trying to make a living. But Friday we are supposed to get yet another snow storm and have 5 to 9 more inches dumped on us. So after doing some snow clearing I hope to come back to it Friday.

One thing that has turned out good is when I head to bed and lay there awake thinking about how I will tackle the next step in the process I get sleepy and pass out. No counting sheep, no pills, I'm like I have got to figure out a way to bottle this process and sell it to the masses. An excellent way to produce income to buy more figures, or actually hire someone to do this whole thing for me so I can just game. Brilliant! 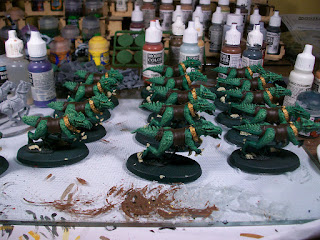 Well that's it for today.

I am bleeding green. Two colors dry brushed on (though I will have to get in there with a liner to sharpen them) and eyes added to 14 more to make my 15. Tomorrows goal will be to finish the Horse/Dino furniture and the collars etc. I am trying not to think to far ahead so as to get discouraged, like building up the bases as little vignettes. Then building, priming, painting riders, yadda, yadda, yadda.

I tried to see if my Perry Samurai would fit on top and there is no way. That would have been a hoot to show up to a game and place them down and say oh yeah, these are the Red Devils, or Green in this case. 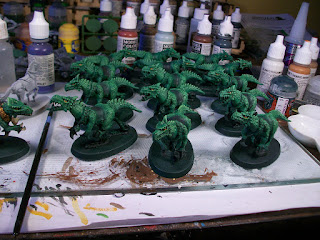 Well yes. Who doesn't like the idea of having a fantasy dinosaur army. Way back when (Warhammer Fantasy 5th or 6th edition) I actually owned a Lizardmen army (dinosaurs), and I've been hearing about Age of Sigmar and how the Generals Handbook has made this a fun and simple system to play again.

So why not. I've been completely drained for the last month. I can't even tell you what I've been doing other than trying to avoid getting the flu. So if dinosaurs is what it takes to get me painting, okay then, I'll have a go.

The Lizardmen army is now called the Seraphon Army. When the end of the world came they launched space ships into space and became celestial. Whatever, they are now dinosaurs that get painted in brighter colors basically. Like celestial stars, so bright. I'm not so much into the fluff as I am into what looks really cool.

My buddy Skip has taught me that if you can buy it cheap, go for it. So when I saw a super sweet deal for some Saurus Knights on Ebay, I bought them. I then skipped over to my local crack house, er I mean hobby shop, and bought a rattle can of Caliban Green to help me try out some speed painting. I don't want to spend a lot of time making these look super sweet, I want them done yesterday so I can game. But like all my projects it probably won't get down until the next leap year. You never know though unless you try. So I am trying, and we'll go from there.

Here is a picture of the group sprayed painted and a black wash applied. I am going to paint all the Cold Ones (these are the mounts for the Saurus dudes) and then when finished paint the riders. 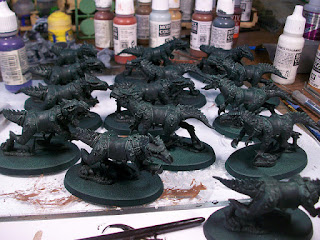 ...and here are a couple of shots of a painted up test figure. Mind you I still have to put a few details and touch ups before it's finished but it will give you the idea. 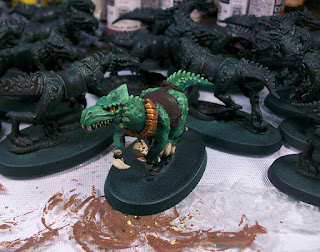 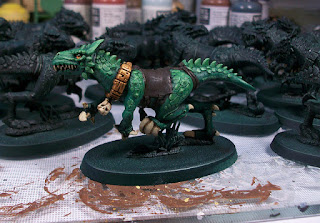 Well that's it for now, I am off to watch the first "Jurassic Park" movie;)