Continuing on from my previous posting I present my US Infantry painted by Steve Dake, with the bases done by me. The models are 28mm Empress Miniatures. They have a lot going for them pose wise. Lot's of motion and that is something I really dig in my miniatures, no stiff posing and yet at the same time a realistic pose. Of course no pose is a good pose unless you give it the right paint job and Steve was spot on again with my US lads. I have all kinds of ideas for more troops, but first I am busy painting up some terrain (mostly buildings) for the Afghanistan area (that I purchased from Phalanx Consortium) so I can have a few games before deciding what direction I want to go with this.

But in the meantime here are the photo's. Remember to click on them to see larger size. 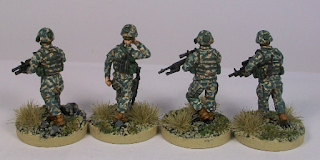 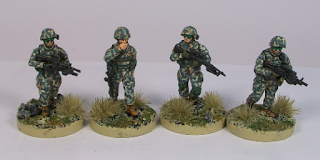 The above figures are US1 On Patrol from Empress

Above are US2 In Firefight from Empress

Above are US3 from Empress

Above are US4 command group, includes radioman and medic

Well that's it for today hope you enjoyed the photos.

Last year (2016) I attended CincyCon for the first time down in Southern Ohio, I came across a new (to me) miniature rules set called "Skirmish Sangin", which as the name insinuates is a skirmish level game. Meant to play with around 40 figures at most, but probably around 30 is more likely what I am thinking. This because it's based on table size and a few other things. I don't plan on running anything more than a 4 foot by 4 foot table.

While at this convention Chris (the proprietor) of "The Phalanx Consortium" (who is the US distributor for Skirmish Sangin products) was running demo games, and his beautiful table and nicely done figures caught this ex army man's interest. I tried out a game with a friend while Chris game mastered and helped keep the game flowing well. I'll let the following sentence tell you if I enjoyed the game or not. After the game I went to his booth and promptly bought the rules, a supplement, and a bunch of Afgans, and US Rangers. My friend bought some of his buildings which I purchased off of him a few months later after much pleading and imploring. The game really rocked me. It's a campaign that I didn't know too much about (because of the much more reported goings on in Iraq) and I wanted to learn more about why, where, how, etc.

Well as most miniaturists other projects took up my time and I kept meaning to start them up and one year later still hadn't done anything with it (other than collect, which is something all of us miniaturists are very good at;)). So another CincyCon came (2017 March) and has gone and while there I again stopped by Phalanx Consortium booth and bought some more troops and scenery items. I had also supplemented my Skirmish Sagin figures with the also wonderful line from Empress Miniatures. When I came home I literally had to sit myself down and ask myself, with so many projects going on, when was I going to get around to painting these guys so I could get playing at the table?

Solution? Maybe it was time to farm this out to another painter. But who? There was a certain style and character I was looking for, and I had in the back of my mind who that person was going to be. This was because I had been following his work on the internet over the years from blog postings to his work for miniature companies for their displays. His style over the years has gotten better and better, and I have to say my most vivid memory was his beautifully painted French Cuirassier's for the Franco Prussian war, which I had the pleasure of pushing around in a game many many years ago. His name is Steve Dake and the pictures I will show you below, I am sure, will have you agree with me how lovely they are.

The first batch I am showing you here are the Afghanistan or Taliban figures I sent him. When they arrived they were what I expected and more. Now I think I am a decent painter, but there is no way I could have copied Steve's work. The character he gives the models with his paint brush is just amazing to me. The only thing that I had to do was flock and paint the bases in a style that I wanted. But first I sprayed them all with Krylon's "Crystal Clear (1303)". This is a permanent, protective gloss finish that allowed me to handle the figures (and protect my investment) while I worked on the bases. When finished with bases I then gave the figure and base a coat of Testor's Dulcote (mat finish). What's really great about Crystal Clear is it does not yellow over the years like a previous product I had.

Okay, lets get to the pictures now, ladies and gentlemen I present my Afghanistan's by Steve Dake! 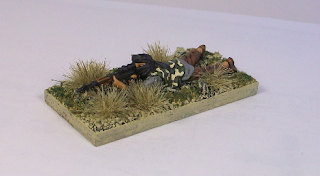 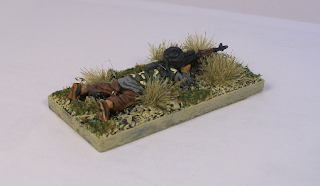 [above Sniper from Skirmish Sangin] 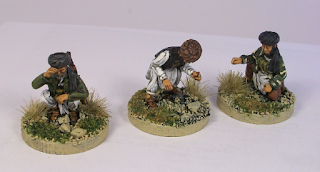 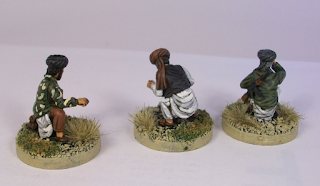 [above Mortar Crew from Empress] 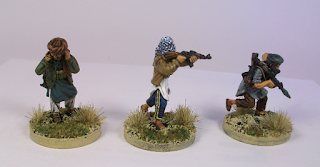 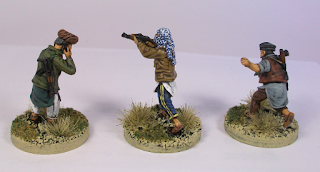 [above are some of my favorite figures from the two different lines. The one on the left is Empress with an Afgan holding a cellphone close to his ear, the center and one on the right are Skirmish Sangin. The center figure I love because Steve made this character come alive with a pair of running pants, the figure on the right because of his pose with an AK47 slung over his shoulder and carrying an RPG}

[group one mix of Empress and Skirmish Sangin]

[group 2 of all Skirmish Sangin I believe]

[and finally group 3 of Empress and Skirmish Sangin]

I am super happy with these figures and now I am thinking I need to add another 20, but that will be for another day. As always thanks for looking, and a special shout out to Steve for his great work.

Added a few more figures to my Nomad collection. I have one more Nomad figure to paint and then I am going to start on my Yu Jing collection.

The Tunguska Interventors are some really cool sculpts. Rich in movement and character. I'd like to get some plastic disks with a print on them showing them doing their hacking thing. One day, but not now. In meantime I hope you enjoy these figures. 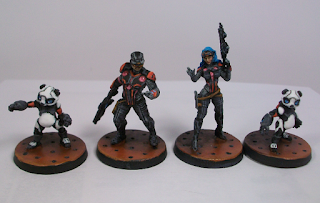 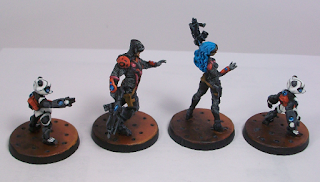 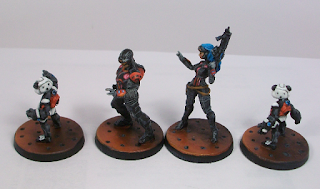