I was like man these guys are going to be easy. All of them the same color, a few details.... then reality struck when I actually started painting these little boogers. What a pain in my... ahem, well you get the point. I must be the slowest painter in the world, at least I think I am. I know there are dudes out there that could finish five in a heartbeat and be painted better to boot! But at least I am trying. I couldn't paint all five at the same time, so I dropped it to three, and then to one. I just had to see a finished product before I moved on. I like them, so I will keep moving on. So here is my first one, which is waiting for the bases I ordered. Supposed to come in the mail today. Oh and that brings me to another point, it feels like Games Workshop figures are getting bigger, or their bases are. The 40mm bases that come with them are way to big to use in a Space Hulk game so I had to order 30mm ones. Any ways I hope you enjoy my photos. 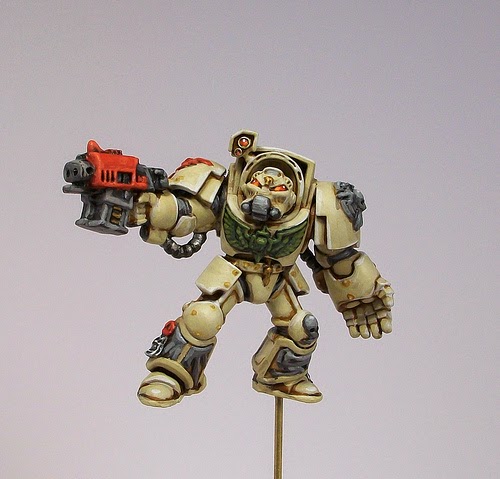 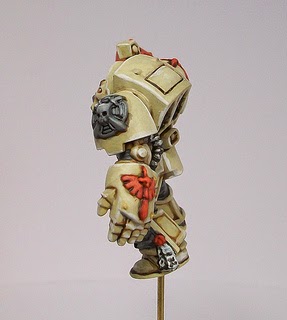 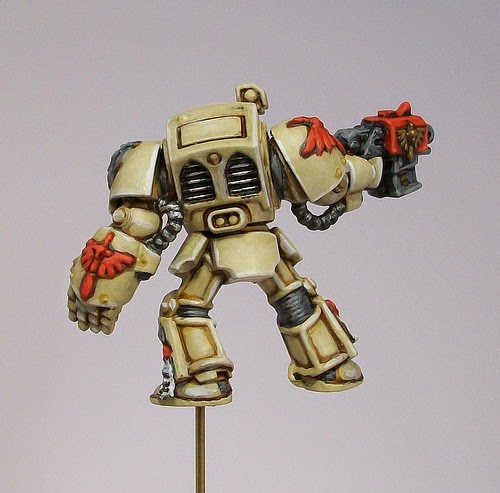 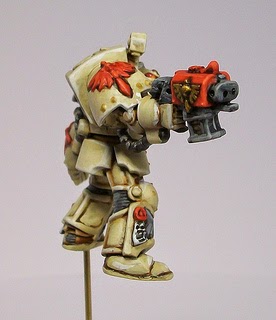 I was like 99.9 percent done with these boys a few weeks ago, but couldn't bring myself to spray coat them etc. as I kept finding other things to do. If it wasn't for ADD I probably wouldn't do this hobby at all, but it can also be a curse in that I... well... have ADD;)

As always left click on the pics to see larger photo's, and thanks for taking the time to have a look. 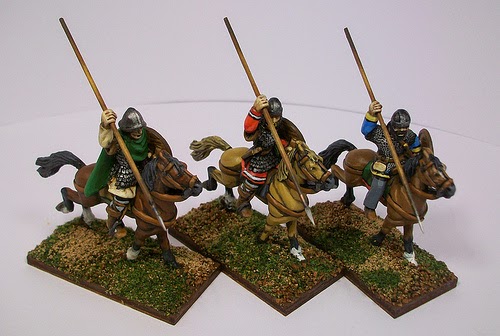 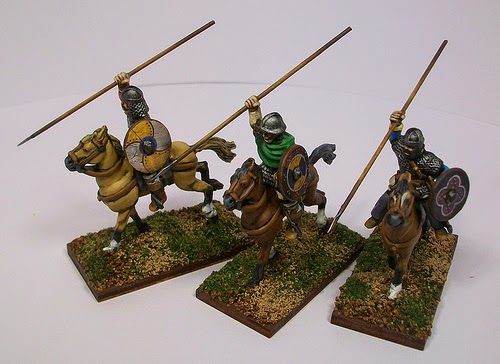 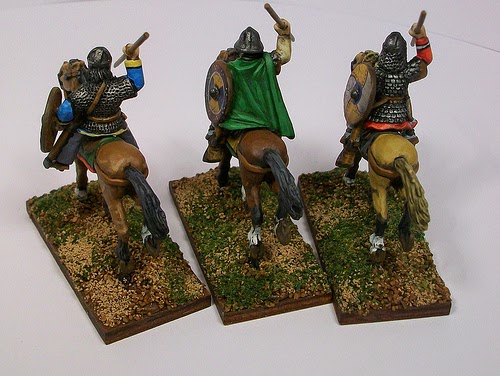 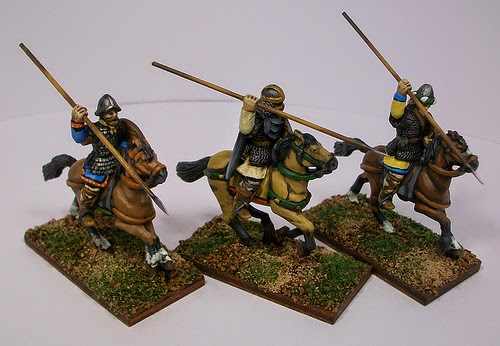 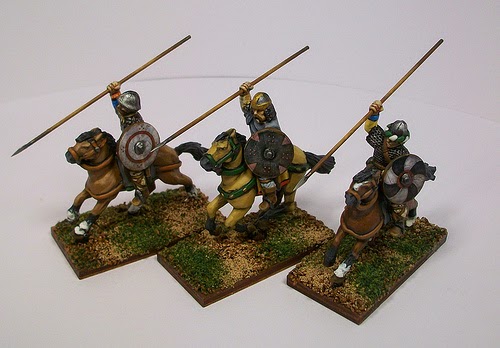 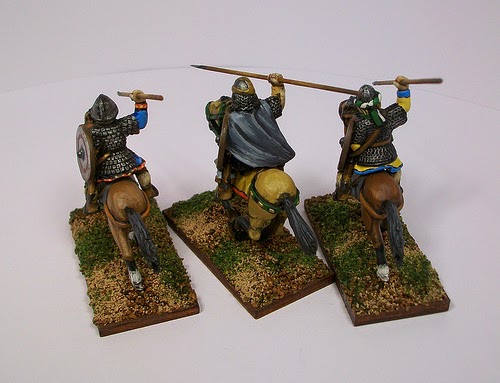 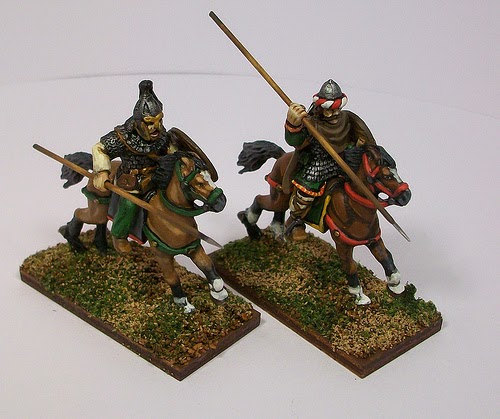 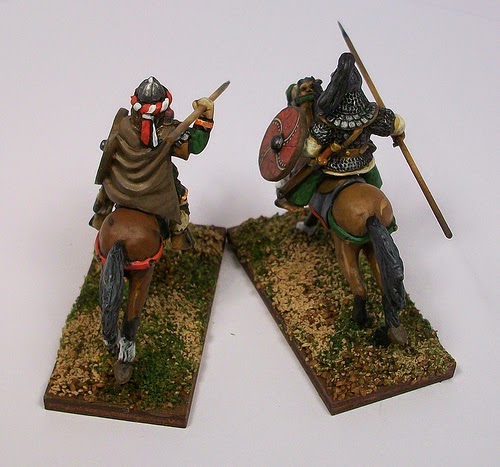 ...and they are coming along. In my head everything is already done, until I sit down and realize it's even slower:(  Ah well at least I'm doing it. 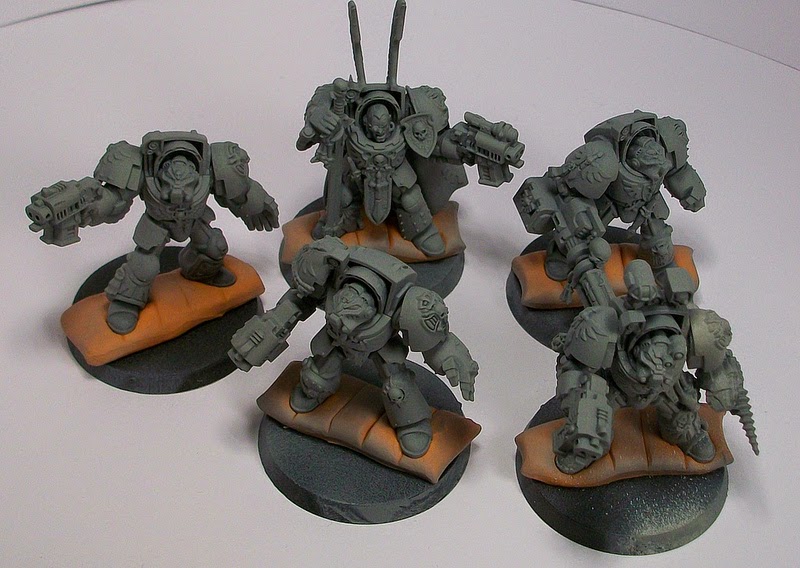 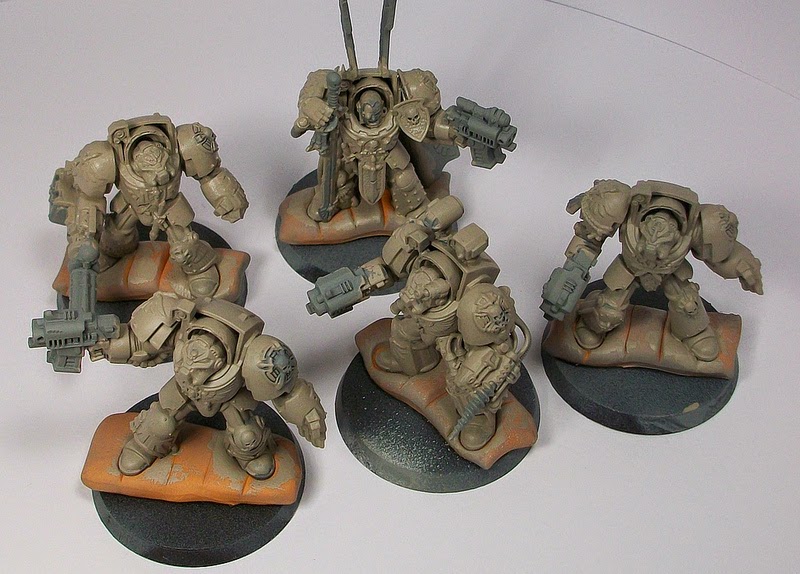 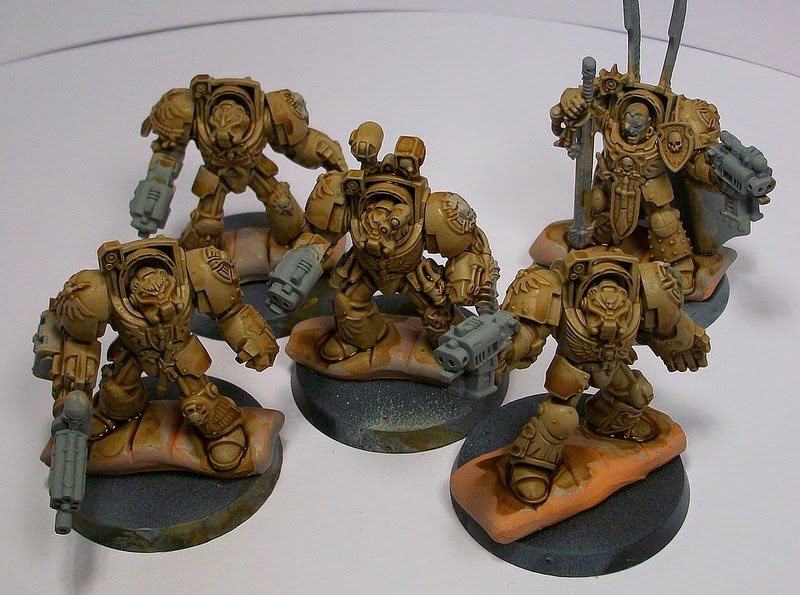 I have several copies of the 2nd edition of the game "Space Hulk" and all the expansions (Deathwing, Genestealer, and the Space Hulk Campaign book). So yeah I am a little gaga over it. Thing is I haven't played in years until this past Saturday when a board gaming friend brought over the new 4th Edition (which is pretty sweet I must say and will probably pick up a copy just so I can get a hold of those thick cool looking tiles).

We couldn't play our 4 player game as the 4th player canceled so my friend suggested this one and since the three of us had played it before, we gave it a go. We had an absolute blast! Of course I had to play the good guys;) Being a Terminator nut and all. I was so jazzed up about it that instead of heading straight for the pub after our gaming bonaza, we made a special stop at the local hobby shop so I could pick up a box of Deathwing terminators.

It's been a long time since I've collected any, in fact I had sold most of my stuff on Evil bay after losing interest with 40K after they changed from third edition (bla, bla, bla) and more Codex changes. But Space Hulk has always held a special place in my heart so I had to paint up my own squad to game with. Still I was quite shocked at seeing the sticker price of 60 US dollars for a box of 5 plastic figures. Though I will add that they have every configuration that you could possibly want in the kit, it pretty much made two thirds of the kit useless to me unless I plan on picking up some boxes of plain ole Terminators, not likely though. Any ways I wanted them pretty bad so I plopped down my money and walked away with my new plastic gold.

I was all joyous until I tried to put the bloody things together. It was a nightmare. Probably because I am older and have to wear my magnifier to see the small things. But it could be I don't have as much patience as I once did (okay maybe I never had that). After clipping, sanding, razor knife the mold lines off, test fitting, etc. I finally muddled through and got five of them together. Finally I get to do what I wanted to do in the first place, PAINT!

Here are the boys all put together.... (I was even insane enough to drill out the gun barrels for the Storm Bolters and Assault Cannon, yikes!) 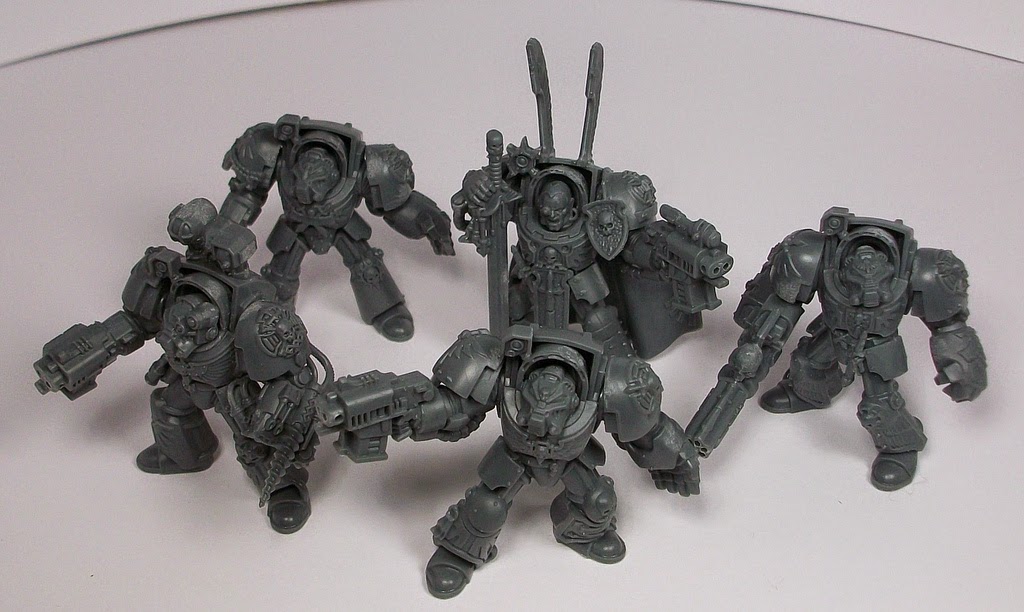 Cheers
Kevin
Posted by Kevin at 11:47 PM No comments:

No pictures yet but now that I have Steppe Nomad Warlord base behind me I have come back to my Frank Cavalry to try and push them to completion. They are basically finished but I am working on the metal spears that I got from Gripping Beast as I decided not to use the pewter ones (after this much work who needs spears breaking off). I should be able to finish the spears in the next day or two as I have to watch the grand children. While waiting for coats to dry today I started working on a Frank War Banner and converted a figure to use as the bearer. Pretty happy with what I did and I didn't cut my finger off doing it which was a plus (Swapped metal heads). So pictures soon or it didn't happen.

Cheers
Kevin
Posted by Kevin at 8:27 PM No comments: