I had set my alarm to arise early, took care of my dogs, had a hearty breakfast, and then sat down for the next several hours slapping paint on some Hessian 40mm AWI figures by Trident (Miniature Service Center in California carries them). I have to say that at the end of the day I was in high spirits and though I am a terribly slow painter, I placed paint on 20 of these bad boys.

The unit I am painting up is Fusilier Regiment Von Lossberg during 1776. I just love the orange facings (maybe because it's my favorite color) and red lining on this Prussian blue uniform. My idea is to recreate the battle of Trenton, using Sharpes Practice using the AWI supplement (This land Divided, and With Fire and Sword). It should be fun, but like all my projects of late will see what happens. I had actually gotten these figures last year or so when I was reading "Washington's Crossing" by David Hackett Fischer. Then fell off the band wagon until recently when I have begun reading "1776" by David McCullough, which so far has been a superb read.

Well enough ado about nothing, here are a few photo's of what I have done so far (by the way you would think these bad boys would paint up faster because you can see everything better, not so, more area to cover with paint certainly slowed me down). 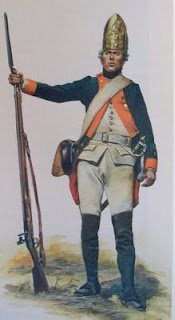 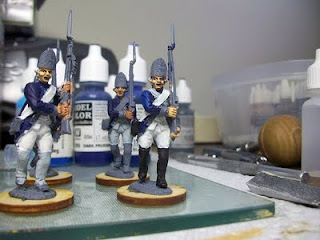