Maginos the mystic. When King Andon was desperate to find a way to confront the dragon horde in the early days of the Dragon Crusades, chance brought Maginos to the castle and he claimed the secret of Dragon slaying lay within the castle. Some thought the bearded man mad, but the King granted Maginos access to the keep. Maginos spent eight days there in the dusty catacombs, deciphering strange warding symbols etched in the walls. He broke those spells after great effort and revealed a vault filled with artifacts, scrolls, and tomes previously thought lost. It was there that Maginos discovered a powerful blade capable of dragon slaying, and thus the Kingdom was saved.

Maginos is a nice compliment to our little group of adventurers, but I will probably end up running his character until the grand girls get a more solid grip on what to do in our little adventure. What I really like about Maginos is his little buddy Meeps. The lady bug looking fellow on his arm is quite a useful tool for Maginos magic abilities. 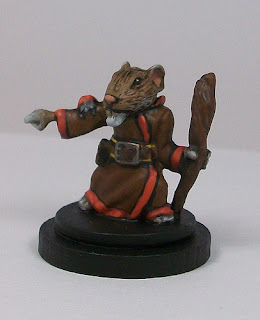 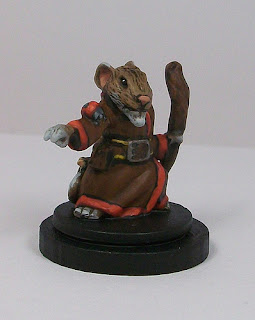 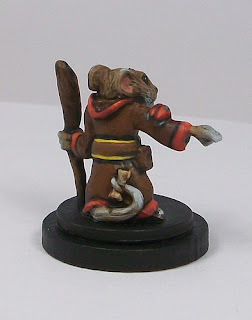 This leaves me with one last character to paint and that one is Nez, the castle smithy.

Filch's face is well known in the kingdoms dungeons. He is a notorious robber and occasional highwayman with a reputation for landing himself in trouble.

This is how his card starts out reading and a perfect character for my youngest grand girl who does have a reputation for landing herself in trouble. She is quite the character and keeps me in stitches.

Filch is my fourth character finished out of six and I hope to finish the next two over this weekend. I even started painting evil minion roaches... brrrr... anyways it's been fun so far, and a nice break from the norm. 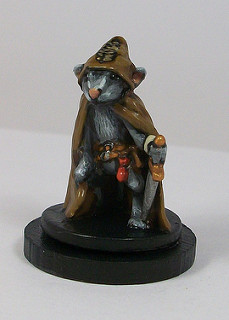 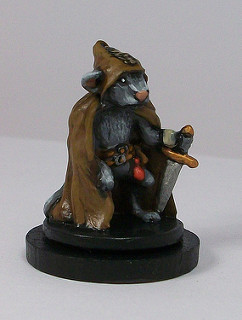 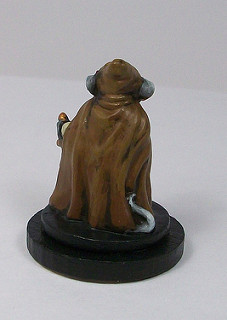 From the Mice and Mystics game meet Tilda the Healer from a group of Mice that are trying to prevent an evil Sorceress from taking over their Kingdom.

A skilled healer, and when old enough, the King requested her to serve as the royal family's personal healer.

As I have mentioned before in previous posts (and I am ashamed to say way back in August of 2016), see Lilly, and Collin, I bought this game with the intention of playing it with my grand daughters. At the time they were just a bit too young to play, but they happily helped me paint a few mice.

This past Mother's day the girls decided that while their Mom was out doing her Mother day tradition stuff with her Mom, they asked if they could come over for a play date. I was like okay, and was stumped a bit on what game to play this time. So what the heck we just jumped into the game and started playing with unpainted figures. I know, the horror. We had a bit of a rough time starting out because I hadn't read the rules in a bit, and they became a little bored, but once we got going they had a lot of fun.

So now I am painting mice and the wicked sorceress's wicked minions. I got to do it. Unpainted figures.... I mean seriously. I was freaking out just a bit.

I've finished Tilda today and placed paint on the last three of the companions, though I have some evil Rats, roaches, and a Cave centipede to paint, those should breeze along a bit faster as I won't need to do as special of a job on them.

Here are a few photographs of Tilda, and one photograph of the three of six I have finished. 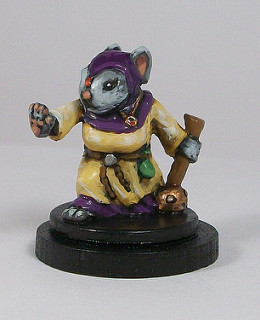 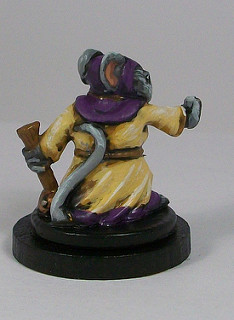 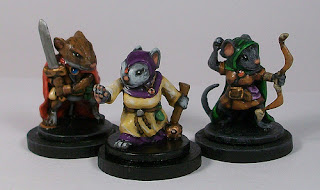 I gotta get'em done, so the next few posts will hopefully be of these cute little guys, and not something that catches my fancy in the meantime..... Squirrel!!!

Last week a friend of mine told me about a group of Infinity players that were meeting up at a local brick and mortar store. He said he was going so I said what the heck I'll go too. There were only a few people of about a dozen or so of the group that evening, but who I met seemed like pretty good Joes. So I sat down and watched two of the veteran players play a game to learn some things, and to google at their finely painted miniatures.

It ended up being a pretty good evening and my friend and I are excited about the potential of gaming with some friendly guys that share our interest in Infinity.

Soooo..... that brings me to my post today. My friend and I are meeting the group tonight and bringing our little collection of cool looking mini's with us. We both know we are going to get our asses handed to us, but we don't mind as long as we are learning and no one is taking it too seriously. I think we will be fine. But I'll report on our adventure in the coming days to let you know how it went down.

So going over my list I decided to paint a remote (robot type thing) for my list as I felt it was necessary to have him, well maybe not a winning piece to place on the board, but it looks soooo pretty. Pretty can win can't it?

Here are a few shots of my new lad joining the Nomad hordes. 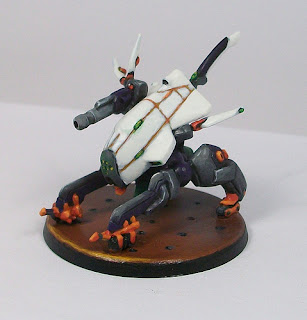 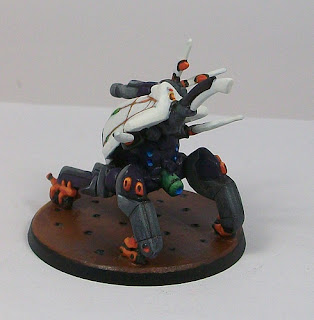