Took a breather from my game designing, which is slowly moving toward being wrapped up in another week or two, to work on my Mortal Gods miniatures.

I was able to get outside in the 21 degree F weather and successfully sprayed primer on my finished Victrix builds. These are a pain in the ass. Nice models, but who the hell makes you have to glue the horse hair crests to the helmets I ask you? Just insane. I should probably just stick to buying metal models so I have minimal prep and more painting going on. But they are pretty, Victrix that is.

Here are the models on my painting dowels, left 8 are plastic Victrix, right 3 metal footsore.

Next up is my Greek Hero/Leader for the group I am painting. A metal Footsore figure and I was unsatisfied with the two weapon choices for his right arm. The way the cloak was displayed had me visualizing an entirely different way to be holding a weapon. So I glued a Victrix plastic spear to the stub of his wrist and when that dried I made up some green stuff and made a hand. I think it came out pretty good. 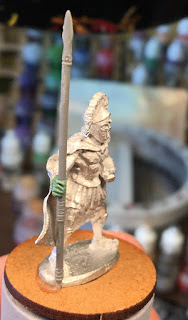 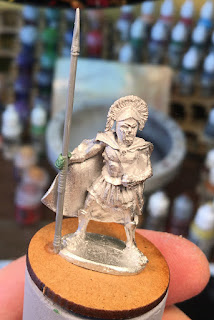 The last picture shows my last 6 miniatures I need to assemble, that being some Victrix Peltasts. I've clipped all the parts I need from the sprue and only need to clean them up, test fit, and glue them together. Then off to the dowels and a coating of prime.

Well that's it for today. Thanks for stopping by and having a read and a quick glance at my project.

All my free time has been sucked up by a major project software designing the latest version of Next War Korea 2nd edition by GMT. I have had zero hobby time otherwise, but got burned out today so turned to the hobby to unwind a bit.

Mortal Gods is a skirmish game by Footsore Miniatures. It looks to be a fun system to play and it was released about one year ago. Yep. Sat on my core boxset for that long.

But small steps is better than no steps. Figures that come in boxset are mostly Victrix limited plastic model kits, with a few metal figures from Footsore.

The first 8 and their stuff cut off the sprue, as you can see in picture. Next up cleaning pieces, and test fitting. Then the bitching and heavy sighing will commence after I glue a piece to one of my fingers for the umpteenth time. 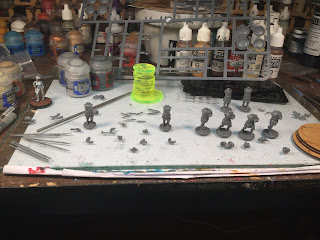 That’s it for now.

I present my finished Corvus Belli model for the scifi miniature game Infinity. Pictures are at the bottom. If your so inclined below is a short history of just exactly who is this masked vigilante.

The man who would become Masacre used to be a priest. He initially thought that dedicating his life to religion would help him feel fulfilled. One day, the mercenary Deadpool visited his church and confessed to him, leaving an important impression on him. The priest concluded that there was no good in the world, and declared that it instead deserved punishment.

Taking the name of Masacre, and inspired by Deadpool, he swore that once he "fixed" Mexico, he would travel to the United States in order to join forces with his idol.

With the reluctant help of Inspector Jaime Gordón, Masacre was on the hunt for crimelord Calavera de Jade. After stopping a gang named Los Muertos from robbing a bodega, Masacre met up with Gordón. Gordón refused to give him a notebook with the names and info on every criminal of the city, for which Masacre attacked him and took the data by force.

At night, Masacre rode on his bike to Calavera de Jade's expensive mansion and crashed a party he was holding with different other criminals. The party was in celebration of the arrival of El Especialista, a henchman brought from the United States by the CIA in order to take care of Masacre. Soon after Masacre attacked the attendees, Calavera de Jade deployed El Especialista. This henchman could allegedly not be hurt by any bullets, so Masacre stabbed him with his two machetes and then cut off his arms.

After killing El Especialista, Masacre kicked Calavera de Jade out of the balcony, and the villain fell to his death. The CIA agent confronted him, and Masacre managed to use one of Calavera's jaguar pets to subdue him. Shortly before being killed by Masacre, the CIA agent promised he would be avenged.

The following day, Masacre bid farewell to Jaime Gordón, and rode on his bike to the United States, alongside the jaguar pet, whom he had named Justicia. When he reached New York City, Masacre became a member of Deadpool's mercenary group known as Mercs for Money.

However, Masacre and the rest of the Mercs for Money eventually became disgruntled by Deadpool, from the way he treated them to the delays in their paychecks. When they set out to create their own business, the Mercs discovered Deadpool had been skimming on them. After retrieving and burning their contracts from a safe deposit in Ho-Ho-Kus, New Jersey, the Mercs and Deadpool parted ways. 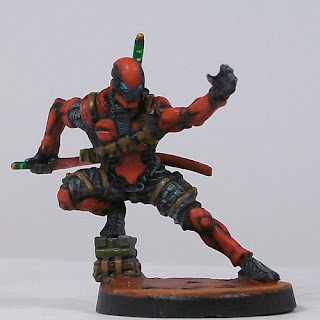 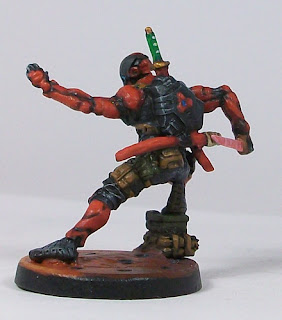 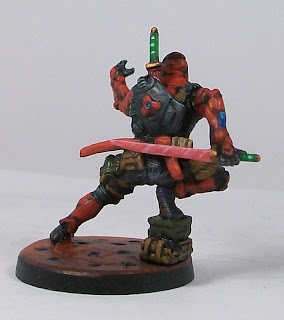 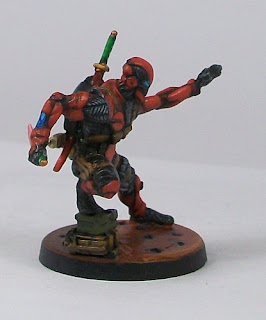 If you've made it all the way to the bottom here, as always thanks for looking.

[The following quote taken from the company Wyrd's webpage]

Malifaux, a twisted mirror of an alternate Earth in the 1900s; a world of gothic horror, Victorian structures, steampunk constructs, and wild west gunslingers. Rife with undead amalgamations, monstrous vengeful apparitions, and other creatures that bump in the night.

So needing a break from painting Infinity scifi models I decided to dig out of my treasure trove this wonderfully animated model that Wryd put out several years ago over the Easter sale. It's a War Wabbit that is used as a proxy for the Gremlins War Pig. It's the kind of goofy fun-ness I like and it helped that the model was well sculpted (but delicate).

I don't know the name of the artist but looking over the web I saw some pictures of a painted War Wabbit that I took to in a half heart beat. In general I used the same paint scheme but did change some of the color palette.

Without further ado, here is my War Wabbit. 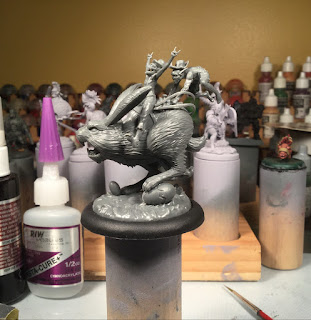 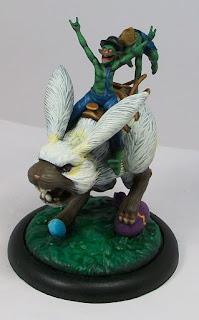 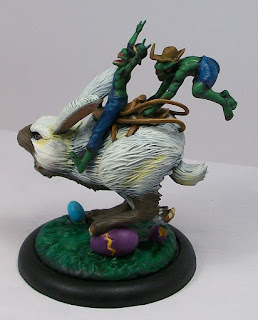 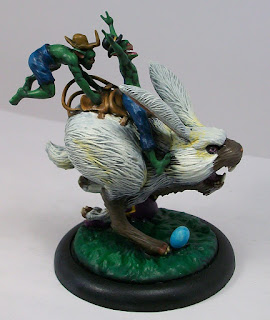 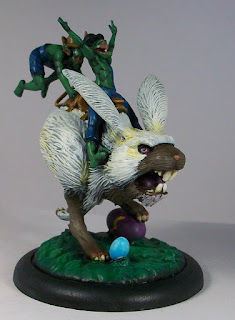 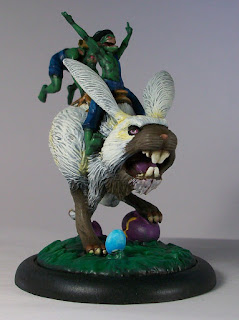 Email ThisBlogThis!Share to TwitterShare to FacebookShare to Pinterest
Labels: Malifaux

Finished. My project for the club's Paint and Play for the table top miniature game "Infinity" is finally done. I ended up painting 23 models. Here are the boyz..... 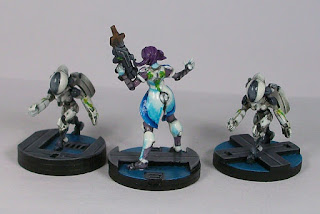 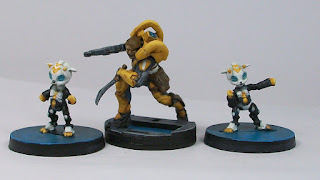 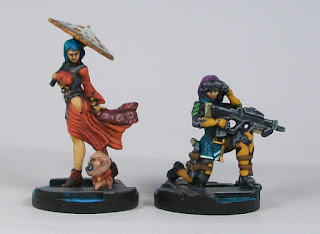 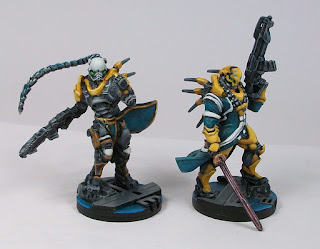 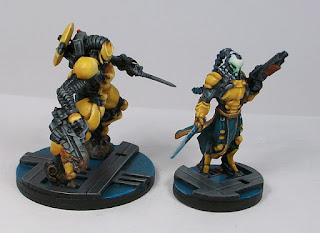 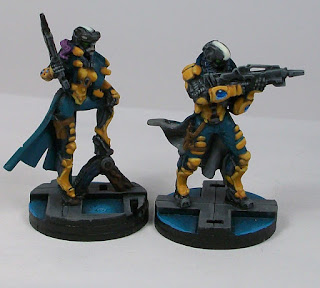 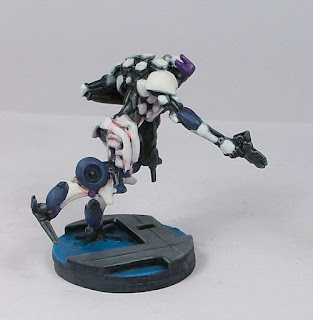 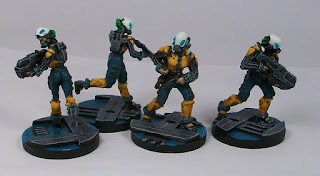 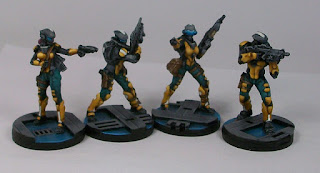 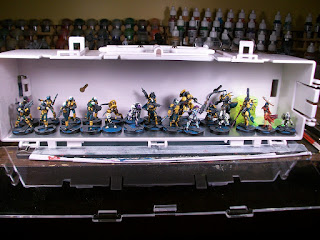 That's it for now, have a little stomach bug, so no big write up.

Arena Rex another chapter in my hobby life....

Having gone through the ceremonial preamble I struggled to breath through my now closed helmet vents. The stifling heat didn’t help and I could feel the sweat trickle down my neck. The roar of the crowd, as the gates opened to release the beast, shot adrenaline through my veins. It was showtime, the long hours of training, repeated over and over again until it became a natural reflex, were soon to be tested. I allowed a small hidden smile to crease my face. “I am Iason the undefeated from house Ludus Magnus, come forward beast and meet your demise!” I shouted. So began the dance of death that has transpired hundreds of times before in this ancient arena..... 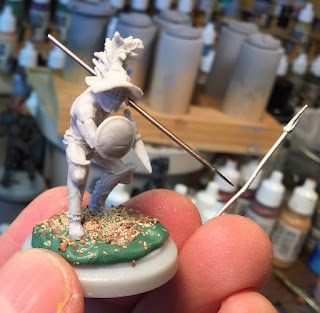 Arena Rex, a historical fiction based gladiator game, has been something I have been into since Adepticon of March 2019. I have since bought a playmobile Arena, spray painted it, and then gave it to my good friend who promptly built an awesome diorama or vignette for it to rest on. You'll notice in the picture above I am holding the assembled miniature and a soft lead spear. The spear was too soft and bendable (but better than the resin one they supplied as well). So I got one of my metal pikes out and cut it in half to use as the spear instead. While the models are beautiful, they are very delicate. Assembly is not for the weak of heart, and testing fit before gluing has saved me more than once. Below is a picture of the assembled play mobile arena turned into a beautiful vignette. I only have the gates to finish painting and then place them. 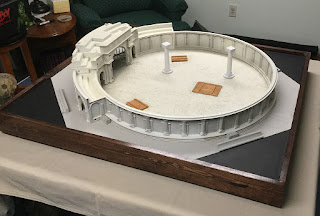 I've two more models to assemble before I get down to priming and painting. The big thing was assembling them so I could practice the game a bit to give me a good feel for the mini's before I start investing a lot of hours laying down paint.

Showcase: Sophotects and Yudbots for the Imperial Service

Sophotects, in the Infinity world, are from the faction ALEPH. Basically living robots, you know, "Do Androids Dream of Electric Sheep?" type stuff.

The Sophotects are technical support and immediate reaction medical operatives. They are designed, trained and equipped to keep ALEPH’s personnel and equipment working both during their own and combined operations. Their original designation was Rbhu, the minor Vedic gods of great wisdom and ability, but the nickname they have received is Sophotect (The Classical Greek name for “Wisdom Creator”). Sophotects are based on the Deva model Lhosts, into which they download Aspects knowledgeable in medicine, arms, engineering, and military electronics.

The Yudbots (which I call Ugly Ducklings) are basically the remotes for the Sophotect. Going into areas that are to dangerous for the Sophotect to go, or simply having her be able to perform her job at a distance through them.

I also wanted to thank Tom Schadle for the paint scheme idea, his are just beautifully done, and until you try yourself with a brush you'll never experience how good his are as these models are so dainty.

I've also discovered painting white TOTALLY sucks. I hated painting this, and not totally satisfied with it, could have done blending better, yet at the same time I am happy with what I did. I know, it makes no sense.

This was my last and final model for the paint and play challenge my club is planning for November 23rd. I got it done just in time, as I will not, most likely, have time to paint in the next few weeks as I will be taking care of some personal family business.

So until next time enjoy the pics..... 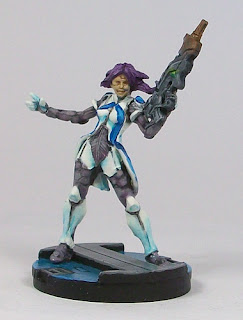 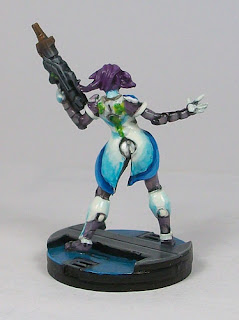 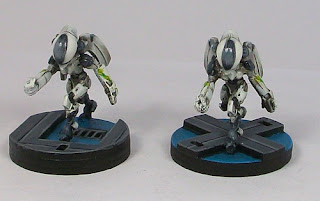 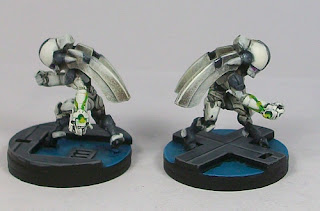 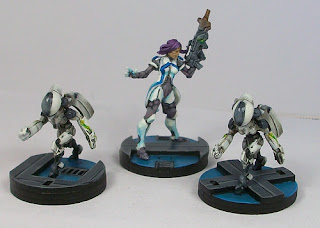