Pikes have been on my mind for these last two years and I really wanted to push into Renaissance pike types of the late Italian wars. You know, flashy Landsknechts, and all the other gaudy bits.

My idea was to use Warlords "Pike and Shotte" rules. That would require quite a bit of painting. Then along came "Pikemans Lament", a skirmish base game and suddenly I had an idea. That idea would have me putting together a Pikemans Lament size army around 40 to 60 figures and have me playing right away which would help my motivation to keep on painting and playing. I figure I could slowly work my way up to the 200 or so figures I would need for Warlords Pike and Shotte.

But then it hit me that to be able to play with any of my locals I would have to paint two armies. Not that my local hobby boys are not keen to the idea, but trying to get them to collect and paint them in a timely fashion is like waiting for Santa Claus to still bring you that present you wanted when you where only ten years old (and that was 50 years ago and I am still waiting!!! Hello Santa? Are you reading this???).

So I started to lean hard on the idea that I would have to paint around 120 figures to be able to play against someone else, instead of 400 figures. Hmm, let me do the math, wait for it..... okay Pikemans Lament it is!

In the meantime I was sharing my idea with my friend that might as well live on the mars (he lives 13 hour car ride south of me) when it comes to face to face gaming. I was hoping to get him hooked and then we could at least play Pike and Shotte once or twice a year. When I told him what time period he simply said, Kevvvvvv those are going to take a long time to paint. I didn't want to hear it, but that's what real friends do, they tell their friends not what they want to hear, but what they think. Suddenly the Late Italian wars came crashing down around my hobby world. I was crushed.

I thought on it a bit and I realized that he and I loved playing English Civil War. We never had figures, but a friend of ours did and we really enjoyed playing them. Hell I still have an Osprey book I collected from way back then called "The Campaign of Naseby 1645" copyright 1979! It was one of their Osprey Wargames series and long out of print. But still pretty cool to look at.

So I collected some plastic model kits from Warlord games, and started working on my friend who lives on the mars and....... nothing ever happened. Zero, zilch. So they got tucked away until just a few weeks ago.

My friend who lives on the mars suddenly started emailing me about how awesome it would be to do "Scanian War" or something similar, and I was like boring. I think he mostly wanted to do it because painting uniforms would be super fast with his already super fast skills.

I countered no not interested what so ever but I would go for ECW and starting talking up Pikemans Lament again. Suddenly, and I mean suddenly, my martian friend has acquired said rulebook and all of a sudden he has like 40 figures painted in two weeks.

Do you know what it's like trying to stay liking a friend who has the skill of being able to snap their fingers and put their good friend under that kind of pressure? I basically have three more weeks to paint up a 24 point army. Now I did use this past week to good use and this is where my long winded article has finally led us.... to what the hell I painted.

As the title says, The Kings Lifeguard of foot was under my paint brush this past week. Now having been doing Infinity figures here and there I was a little out of sort trying to get back into my rhythm. I thought about replacing the plastic pikes with metal ones but decided against it. After completely finishing the pike I promptly broke three pikes and stressed my self out pretty bad before I got it together measured out the length of metal pikes I would need to replace broken ones with and used some green stuff to help manage the little bits. I am glad I broke them now (not at the time) and not during a game, or my friend (the martian) would have heard some colorful language.

That was the first disaster. Now I have to go outside to spray on my gloss, and when that's dry go out and spray on a coat of mat. It's been pretty humid around here of late and while this doesn't affect my gloss coats, it sure does the mat coats. You get a frosted, ugly, want to punch yourself in the face result.

Now I am under pressure to get this done, don't know when the humidity levels will drop, and I ABSOLUTELY know better to even try, but I was impatient went outside to do it anyway and...... every single figure got frosted and I could have just about spit.

Fortunately I know how to fix it and got out a bottle of Vallejo brush on Gloss varnish. Did that and it was about 95 percent effective, and once dry I then used Vallejo brush on Mat varnish and I got them to where I needed them to be. Sigh.... I cost myself two days, but re learned valuable lesson. Patience.

So today I assembled 18 shotte, and placed them on stands and primed them, and I hope to finish them this week. If I do this will give me 10 days to paint 12 Cavalry and give me a few days to rest up for my martian friend to fly in for four days of gaming (that isn't as quite as impressive as "Gladiators" 150 days of games, but hey it's a start).

Gentleman, and any ladies out there viewing my super cool stuff, I present the pikemen of the Kings Lifeguard of foot from the English Civil War. 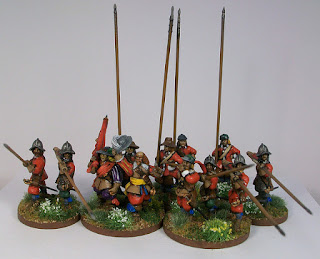 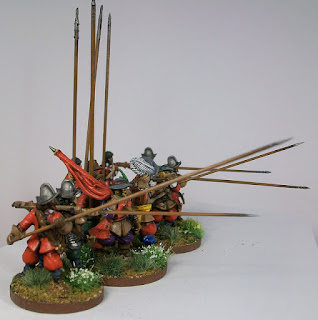 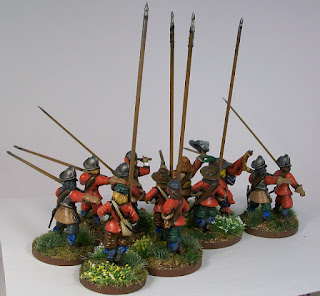 Cheers and as always thanks for looking
Kevin

PS
Oh and if you haven't figured it out, I am a Royalist 100 percent of the way:)

Well I only wish I could tell you that I have been on some great adventure these past 95 days (I seriously can't believe it's been that long since I posted anything), but then I would have to tell you a story.

The truth of the matter is basically much more simple. My Grand kids were out of school for the summer, and I had to step up and watch them during the day. Yep, family comes first. Now my grand kids are awesome, but at the end of the day I am just mentally exhausted. The last thing I wanted to do was sit down and do anything hobby.

That and trying to get myself and my Wife back in shape on the bicycle so we could go on our on tour this year after having missed doing so the last two years because of her bout with Cancer. She is cancer free now, but it has left her tore up after the radiation, chemo, and major surgery. So both of us are starting from scratch. After such a long period off the bikes we have lost a lot, but more importantly I still have my stoker partner (we ride a tandem together and the person on the back is called the stoker, the person in front the Captain) around to peddle at all. I will mention this about biking though, had it not been for the great shape she was in because of biking, I am not sure she would have had the physical endurance she showed to make it all the way through. Along with that and her mental hardness, I will simply say she was and is one tough son of a bitch. No way I could have endured what she went through.

Then over 4th of July I ended up in the hospital thinking I was having a heart problems, but it turned out to be heat exhaustion, exertion, and a wacky thyroid that went wackier after suffering heat exhaustion. My resting heart rate had dropped down to 40, and though I would like to think I am a world class athlete, I am simply not and knew I was in trouble. Took a few weeks to recover from that, but I am doing much better now, so I won't bore you with any more details other than to say thanks to all of you that emailed me to make sure I was still walking around on the planet.

So with one more week to go, my grand kids head back to school, so I expect my mental capacity to stabilize and hobby related stuff to get back on line.

PS
I expect to make a hobby post tomorrow as I have actually painted 12 whole figures this past week. You heard it right, 12 whole figures. Amazing, even though subconsciously I seemed to keep trying to sabotage my work.