I wasn't sure about the 1st Para's panzerfaust use at Cassino but have since read of an incident where they used them to great effect. I had taken the Panzerfaust figure I had and converted him to a rifleman and never really liked what I did. He was to stiff looking. So off with his arms and weapon. First arm came off clean, except the rifle disintegrated (no problem as I was not going to reuse it) and then the second arm came off and.... snap off went the hand. Well I was able to glue it back on and will have to use a little modeling putty but it almost ended up in disaster. I have learned to build the models without the heads and weapons for painting purposes, but unfortunately I had to put the Panzerfaust in place as I would not have been able to place it once the arms where on. Converting the figure back to what it was supposed to have been works out as I am now able to use another figure out of the box I would not have been able to use, the Panzerfaust's ammo carrier. 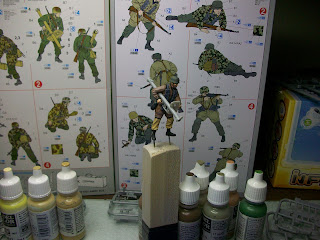 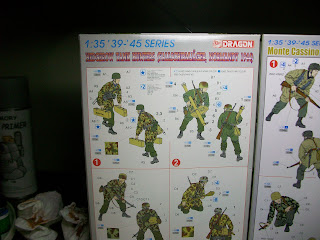 I will be taking a few days off from modeling as it is Turkey day and I will be stuffing myself with turkey dinner with my family. Hope everyone has a safe and happy holiday.

Cheers
Posted by Kevin at 10:45 PM No comments:

For some reason this unfinished kit has been on my mind forever. I just love the Ma.K. world and like a drug I just can't seem to quit the habit, so to speak. This is what I have built so far of this 1:20 scale model. Babysitting my grand daughter has thrown me off my Cassino project for the last few days, so while the Holidays are upon us I will take what little time I have to myself and tackle this kit for a bit. 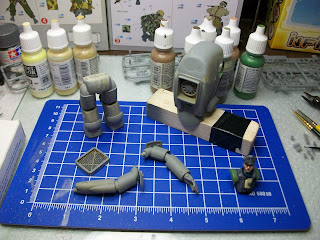 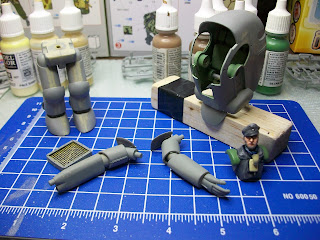 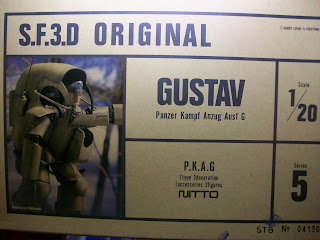 Assembling another German paratrooper for my project I am amazed at the level of detail these 3rd Generation kits bring. I just had to share a picture of the K-98 rifle and it's separate bolt assembly, just amazing. Even more amazing was my big giant fingers and thumb putting it together straight. 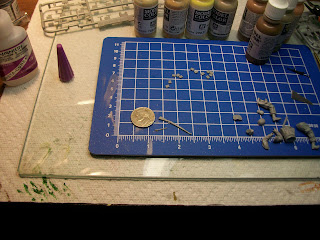 Had some more time to work on the project. My first time really getting detailed with faces and I am not completely happy with how they turned out but I think I have the idea down and that I will get better as I do more. I filled in a bit more of the figures with their base coats. I need to build another 4 figures to complete the squad and painting four at a time seems to be working out. I am having so much fun just building the models I am being tempted to finish building my 1:400 scale U-boat from a while back. I have some nice photo etch to put on the bridge and perhaps I will work on it again if I need a break from the soldiers. Here are some more photos of work in progress. 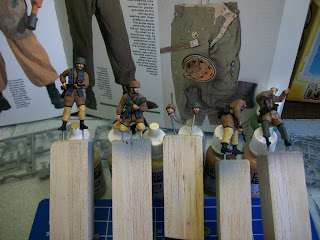 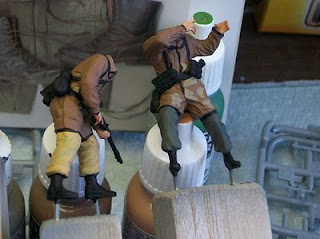 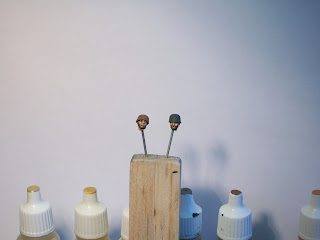 Also after building these four I have come to the conclusion that it will be much easier to paint the figures with the heads and weapons left off. Painting them in parts and adding them together later is something I have discovered when frustration set in trying to paint them as one.
Posted by Kevin at 12:28 PM No comments: 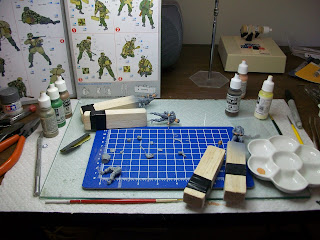 Several more figures being put together. 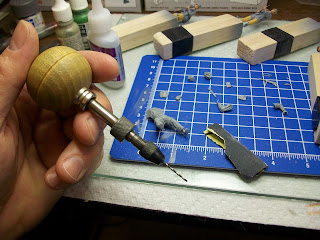 Pin vise I use to drill holes in the bottom of the figures so that I may install pins. This allows me to affix them to a custom made balsa wood base so I can handle the figures without having to touch them. 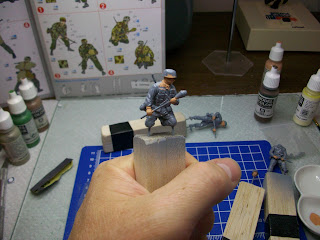 As you can see it is quite easy to paint the figure in this manner. Here I am placing the base coats of flesh on. I will follow up with more detail on the colors and shading that I will do. The face is everything and I still need more practice at this. 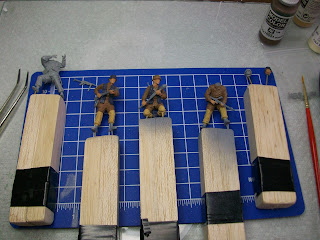 I usually try and paint my figures in painting order. Meaning I will do so many in one color and while those dry move on to others and paint a different color on those so I am not waiting around. I usually do them in groups of four. Here I am putting on the base coats for the uniforms. You may wonder at the brown coats and the tan pants, but this is just the beginning of a long process of painting camo. The Fallschirmjager at this time still had a mix bag of uniforms because of the Campaign in Africa/Tunis. Not all will be done this way but it makes a nice mix.

Project Cassino and the assembly begins

Since the miniatures are going to be used for a skirmish game (1:1), I have decided to build a German fallschirmjager squad of 8 figures. While not a full squad, during a campaign few would be up to full strength. The idea in the back of my head is to have one squad of Germans, and several squads for the Commonwealth forces. By doing it this way I am planning on building just what I will need for my first scenario. This will keep interest peaked, and give me a good base to add more figures at a later date.

I believe that diversity is needed when choosing figures for small scale gaming. Putting the same pose together would be boring and unimaginative. So I put some thought into what figures from the kits I wanted to put together and what ones I may modify. Since I need to trim them from their sprue and clean up the mold lines etc. by lightly sanding them, I will build one figure at a time so I don't confuse the parts between models.  Besides cleaning up the figures I will test fit the parts before I glue them together. I use a cyanoacrylate glue which is gap filling called "Insta-Cure +". Kind of like super glue but gives you a chance to adjust the pieces a bit before bonding.

As I build each figure I will then drill small holes in the bottom of their boots and install pins. I then attach them to a balsa wood block so I can hold onto this while I paint the figures. It not only gives you a good grip, but now you can't muddle the paint job with your oily hands.

Here are some pics of work in progress (you can click on the pics to see pictures up close): 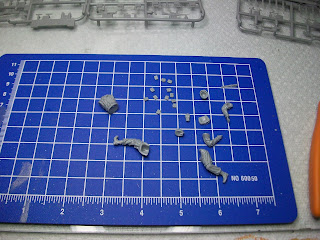 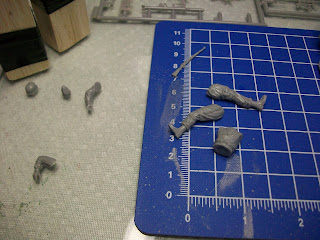 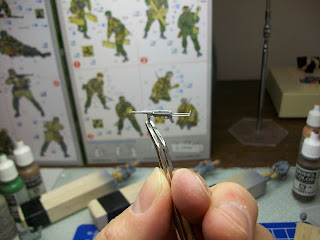 The above MP40 was three pieces, and when put together is just a beatiful piece. 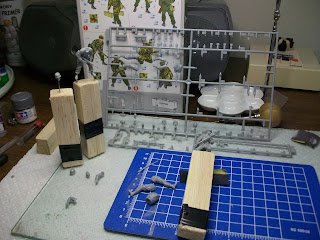 The balsa blocks I put together to use as holders for the figures. Notice after putting the knealing figure together I decided to keep the heads off for ease of painting.

Well that's all for now, until next time.

Cheers﻿
Posted by Kevin at 2:29 PM No comments: