So I am nearing completion (okay 60 percent) of my first highlander unit and my 40mm X 40mm bases arrive the other day and I start getting excited about how I am going to mount them when It dawns on me that all my dudes are empty handed (doh!). I kept the weapons, and Targes seperate so I would have an easier time painting the nooks and crannies on figure. But more importantly the command stand had no flags made yet. Ugh, more work to do! I've normally done Flags, when I've done them at all, using decal transfers onto tin foil. This time around my subject matter seems to only have paper flags available.

I ordered one flag to test out how I liked it from Flags of War , actually I got it through Crann Tara as he stocks them for his range of figures. I didn't want to just glue then together and have this straight flat square of a flag making my paint job look bad (if flags are done right people don't notice the figures as much) so I started searching around the internet when I popped across a blog with a how to type post. It's a post back from 2009 but still applies today here is the link Wargaming in 28mm .

I had to go out and purchase a Glue Stick and once I had that in hand I was able to sit down and start trimming out the flags. I will stress how important it is to have clean hands and laying down a clean piece of paper as your work mat, as well as some patience. Once I cut out the flags and pre-folded them I used glue stick on both sides, placed it on pole then laid it down right where I had worked on placing glue on them to get a good crease around the pole while laying flat on table. I went to flip it over and to my horror glue was on the back. I was able to lick my finger and get it off with no damage but lesson learned, FIND ANOTHER CLEAN SPOT on your paper mat to do crease, not where you slopped on the glue. 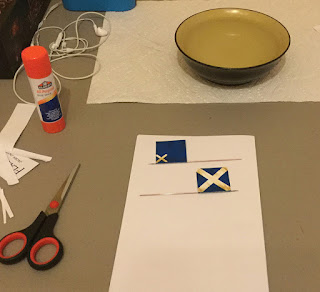 The next step was laying them in a bowl of water for 30 seconds and then removing them and carefully crinkle them up into a position you think looks good to your own tastes. My second learning mistake was I placed both in water instead of one at a time. The first one I worked on I had no problem in shaping and able to set it aside to work on 2nd one (which I had pulled from the water and set aside). One of two things happened, first either sitting there for a minute or two longer while I worked on the other one the water soaked in more and started to dry out, or two I needed to wait a little longer to let the glue set before I immerse it in water. What happened is the paper started coming apart unlike the first one. To fix it I grab my trusty bottle of Elmer's glue put a little on my finger and worked it into flag on both sides. Then crinkled it again. It seemed to hold but I'll let you all know after tomorrow (your supposed to let them dry overnight) how it turns out. Note that I do not place any glue on the staff. The reason is that the staff or pole I am using is just to hold the flag for drying purposes. The flag will slide right off the pole and you will note in following picture they have slid to bottom of staff. I will remove them tomorrow, paint up a pole, add a very small touch of super glue and affix them to the painted staff. Then I will match the color and paint the edges to make the white disappear. 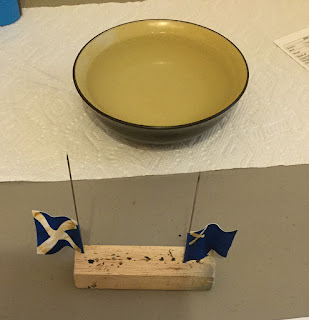 [one on left was first one, the one on right is the one I let sit to long]

Well that's it for now, I hope this helps you in future if you don't already know how to do this yourself. If all turns out well, this may well be the only way I go in future for flags.

It's amazing what can inspire one to take up that paint brush and begin a new journey down a road you never thought you would.

It began a few months ago. My family and I are of Scottish decent, 5th generation as a matter of fact, and anything to do with the Scottish culture is always of great interest to us. My Sister discovered the book series of "Outlander", and when it became a TV series she was all over it. She had an advantage in that she knew what it was about already and tried to convince me to watch it, which I didn't until just a few months ago. I thought it was one of those romance, bla, bla, bla series and wasn't overly excited but she couldn't really tell me about it without spoiling it. So I ignored her sage advice and did nothing about it thinking she was crackers. A few months ago Itunes had the 1st season on sale and with Game of Thrones over and a few other series I like to watch done, I had nothing to lose so I downloaded it.

Man was I a turd for not listening to her. I was blown away. Mind you I almost turned off the very first episode after it was about half over with all the mushy stuff going on, and then it happened. The Heroine finally touched the bloody stone..... okay I won't spoil it for you either, but I have to tell you that they nailed it when it came to customs, costumes, and script (other than the mushy stuff;))!!! When the redcoats where chasing Highlanders through the woods I was suddenly sitting upright on the edge of my seat.

Okay it was all I needed to dive back into the world of the Jacobite '45. Suddenly I had ordered a few history books, scoured the internet for 28mm Jacobite figures, found color plates for reference etc. I was hooked!

The Jacobite '45 has through the centuries held a romantic feel to it and it has not changed to this day. New information has been coming forward from archaeology digs and this has pushed several authors to reconsider the period in question. An exciting time to learn for the first time or re discover new facts about an interesting time in history.

Some how I was able to talk a very good friend into joining me in this project and he has agreed to paint the English. We discussed a bit about what each company that makes 28mm for the period and what they brought to the table. My friend agreed to follow me in selecting a company called "Crann Tara" because I like the more anatomically correct looking features.

I received my first order a few day ago and have already mounted, primed, and put the beginning basic coats on. So far I am pleased with the fact that they aren't to busy which will be a relief as I figure out how to paint what will feel like a ba-zillon tartans.

My approach to painting all these tartans will be to give an artistic impression that you are looking at tartans, meaning I am not going to try and paint all those bloody lines, which will also have the added benefit of speeding up painting. Hopefully my approach will work. I have also discovered that during this period there was not a family/Clan tartan, that the tartans where regionally made and it didn't really indicate a clan as much as the region they came from. Also looking at paintings of battles and other references I see I am going to have to mix them up a bit. I've decided to mix the units by picking three basic colors and paint a third of each unit so.

Well that's enough talk for now and I'll leave you with a few pictures of the project start. 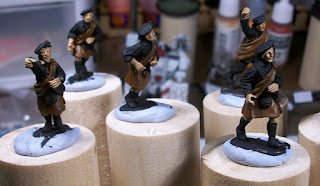 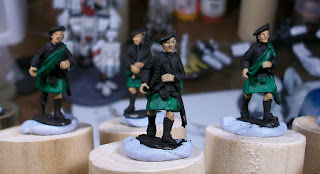 Wow I have touched this model since July 4th! But that's okay, I've been doodling in other stuff in the meantime and that's all that counts. Do what makes you happy (as long as it doesn't get you arrested that is). New units for my Emperor's Children did not materialize like I hoped in August, but I did get some Infinity stuff that made me do a skip and a hop in excitement. But that's another story. Today for some reason my Contemptor Dreadnought caught my eye and I had an urge to try and push on with it. Probably because I've been painting my Tau animated robots of late and the Purple scheme of the Emperor's Children drew me away from the Tau white.

Today wasn't a painting day but instead was magnetizing the arms so my very expensive model could be used in more than one configuration. I took a few photos with my trusty Ipad camera so they may not be the best but you get the picture (while actually four pictures, yuck, yuck, yuck). Tomorrow I hope to prime the pieces and get this bad boy out of my to do paint pile very soon.

Here are the four pics showing this one armed with a Twin linked Heavy Bolter and a Conversion Beamer (I armed him with this just because the name was so cool, conversion beamer, right out of the 1960's scifi comic books!) 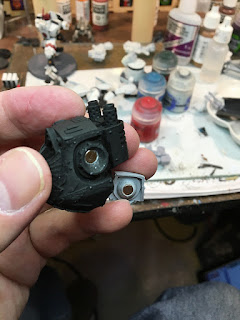 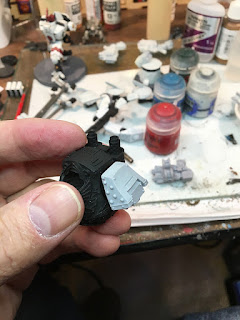 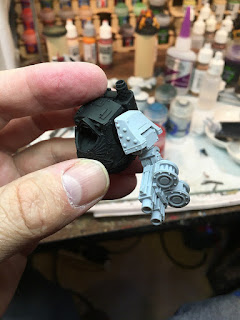 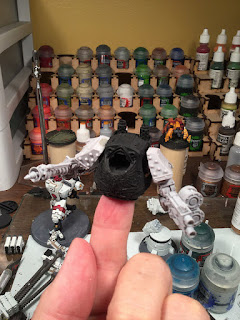