Not the winter cold, nor a driving snowstorm could keep Professor Snape (myself), Hermione, Bellatrix, and Professor Trelawney from appearing at the Commerce Township Community Library's Yule Ball for kids between the age of 2 and 18 on Saturday.

Of course they all got a good laugh when they overheard all the muggle's say how bad the roads were getting there. Professor Snape with a smirk on his face said quietly to Bellatrix, "muggles, how charming they drove, apparating is the only way to travel", and with this Bellatrix let out a quiet wicked laugh.

Even Hedwig made an appearance, of course he didn't apparate, so did have some trouble getting there having to fly in that windy mess. 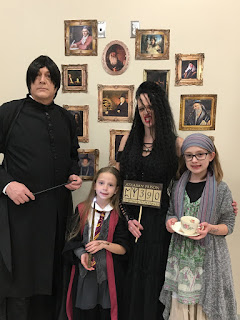 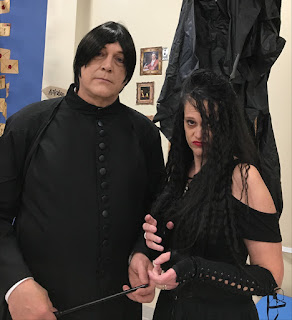 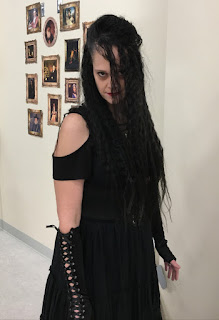 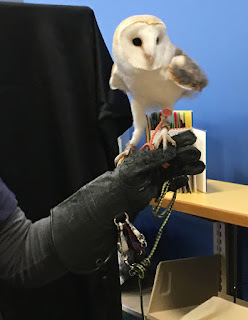 A few days ago a couple of my friends came over to play our first Blood Bowl game, but more importantly work out the Blood Bowl 2 rules. We are starting a league in a few weeks and would be just silly for everyone to come over and not have a clue with at least the basics gotten down.

It's crazy how simple the rules are yet it took us just a little over two hours to play just the first half. That said there was a lot of stuff we thought we knew but stuff kept coming up causing us to dive back into the rule book to figure it out.

In the end it was a very productive get together, we learned quite a bit, my painted figures finally got to hit the table, and it was great to see the progress Rob has made on his human team. They really look great up close and personal. I only took a few photos as I was pretty busy trying to push in the only score made in the game (hand over mouth, did I just say that? I mean the Orcs up 1 to nothing against those puny humans team? A practice learning game to boot!!!). Oh hell yeah I did;)

Here are a few photos of the game being played on my cool but overpriced (had to buy it anyway) mouse pad pitch for the Gouged Eyed Orcs. 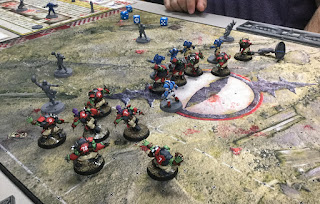 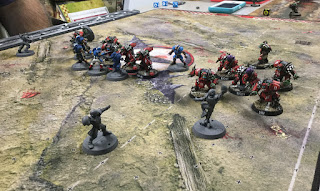 As always thanks for stopping by and having a look.

First game of the year! Gaming in the Man Cave

Well I haven't painted crap with the Christmas crush, and having some construction done in my basement............ okay and I haven't really felt like it, that too.

I have not been an idle lad though. Getting in a few multiplayer games here and there between family coming to stay, babysitting the grand kids (who will one day baby sit me, so I try and do a good job of it hoping they'll remember my kindness and not treat me ill when I am a really old fart), you know real life stuff.

Well I brought in the New Year with a bang, getting off my butt and hosting an Infinity game with two good friends. I ran the game as Mark has never played before. So it was more of a teaching game. Rob and I have badgered him into painting up the faction called Ariadna. They are kind of like the Federation (Star Trek) with their army being a mix of different nationalities. Mark is an ex Marine (though once a Marine always a Marine so maybe I should just say retired), and Ariadna caught his eye because one of the sectorial lists  have models that are like Marines, US Army Ranger types, with all the camo etc.

Normally Infinity is played on a 4 foot by 4 foot table, but Mark only has a 150 points worth of troops right now so I thought it best to play on a smaller area (went 3 foot by 3 foot) for instruction purposes.

Rob brought over his PanOceania faction to face off against Mark. Normally a game this size with two people familiar with the rules would take an hour give or take a couple of minutes. We ended up playing much longer than that because Mark has never read the rules and they have a sharp learning curve on top of that. That said we still all had fun, as there were even a few things Rob and I picked up that we either didn't know or had forgotten.

The first couple of pictures are from the Pano side and then Ariadna side. 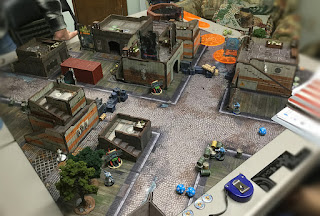 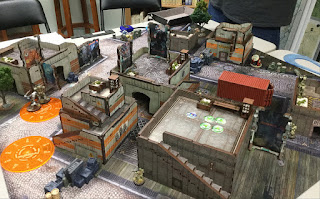 A while back I painted up a Devil Dog and his K9 model for Mark as a gift. Mark painted the rest and he did a marvelous job painting them and matching the bases like the ones I did for him. My regret during the day was not taking close up pictures to show you his beautiful models. Here are the few shots of his men I did take. 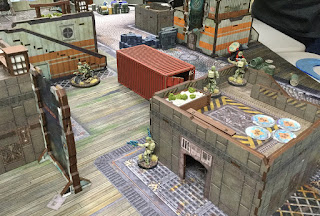 [in this photo you see a motorcycle which is his Maverick, the man in the foreground brandishing two weapons is a Minuteman, and the two gentlemen on the top of the building are Grunts] 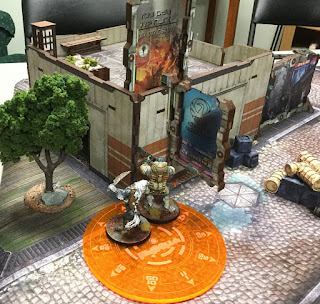 [Devil Dog and K9 unit behind and to left of Devil dog, sadly the picture was from behind. The orange template is were his Devil Dog tossed smoke grenade, then used it to help conceal his approach to enemy] 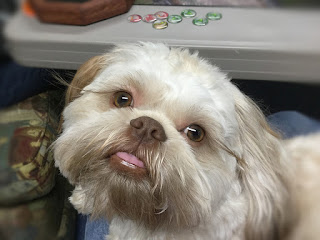 [Who you calling a Devil Dog??? My faithful companion who decided he was going to be in my lap most of the day during the action]

Infinity is not an easy miniature game to just jump into. After reading the rules, playing a dozen games, there is still a lot I need to learn. The only way to get good at this game is through repetition play. Myself and the group like to play so many different games we probably will never conquer this game, but we will keep on playing it as we like the story-line, the miniatures (models), and though the rules are complicated at times, those as well.

The boys below, at least they were smiling when I asked them too;) Good times. 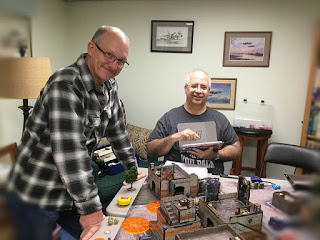 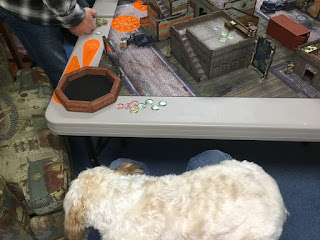 Cheers and thanks for looking,
Kevin
Posted by Kevin at 11:16 PM 14 comments: