One of my very favorite loves in miniature gaming is Air Combat. Visions of being a famous fighter pilot (think of Snoopy and his many encounters with the Red Baron here) I have dreamed about since I was a boy. Unfortunately I have horrible vision and would make the worst possible Ace or wing man for that potential Ace. So miniature air gaming Ace it is;)
I use two sets of rules for my air gaming fun. One is called "Phantoms" and gives you that feeling of tension of actually flying and feeling that dogfight, and the other is Jet Age CY6 (Check Your 6) which is a compromise between realism and playability. I use 1:300 scale aircraft or 1:285 scale aircraft as my choice of scale so that I can have room to maneuver a dozen or so aircraft on the game board.

A quick overview of the scenario played this past Saturday goes like this:

Originally built by the French during the colonial era in Vietnam, the Thanh Hóa bridge was sabotaged by the Viet Minh in 1945. From 1957, the Vietnamese started rebuilding it. Completed in 1964, and inaugurated by Ho Chi Minh himself, the final bridge was 540 feet (160 m) long, 56 feet (17 m) wide, and about 50 feet (15 m) above the river. Allowing the passage of both road and rail traffic, it was a vital link between different regions of North Vietnam, and when the war started, became a strategic passage for supplies and reinforcements sent to the Viet Cong fighting in South Vietnam.
With the beginning of Operation Rolling Thunder (the bombing campaign against strategic targets in North Vietnam), the decision was made in March 1965 to interdict the North Vietnamese rail system, including the Thanh Hóa bridge. The Vietnamese, realizing the importance of the bridge, had set up an impressive air defense network, five air defense regiments being stationed in the area.
873 air sorties were expended against the bridge, starting in 1965 (around '68 Rolling Thunder was halted and no bombing took place between '68 through '72 of North Vietnam until Linebacker began again in '72), and it was hit by hundreds of bombs and missiles before finally being destroyed in 1972. It became something of a symbol of resistance for the North Vietnamese, and various legends of invincibility were attached to it. The Vietnamese gave it the nickname Hàm Rồng (Dragon's jaw). For the US planners it became an obsession, and many raids were planned against it despite their unpopularity with the pilots.

Four of us played the scenario and we deployed 2 X Mig-21's armed only with 2 heat seeking missiles each (no guns), 4 X Mig-17's, 2 X Light AAA batteries, 1 X Medium AAA battery, and off board a SA-2 complex with an ammunition limit of 6 shots for the Vietnamese. For the US we had 4 X A-4 Skyhawks with a medium bomb load, and 4 X F-8 Crusaders armed with guns and 4 heat seeking missiles each. (Remember to click on the images to see there full size). 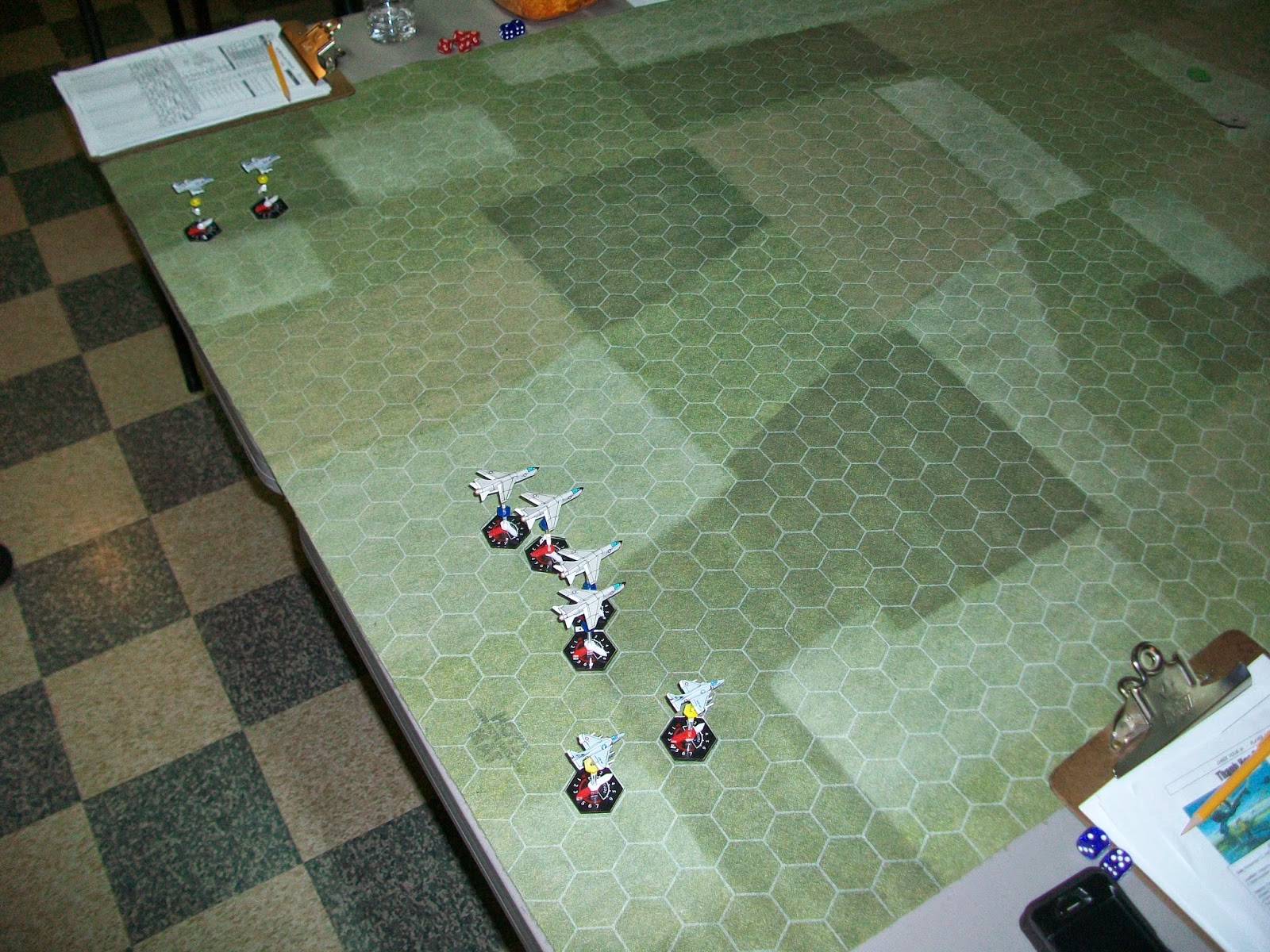 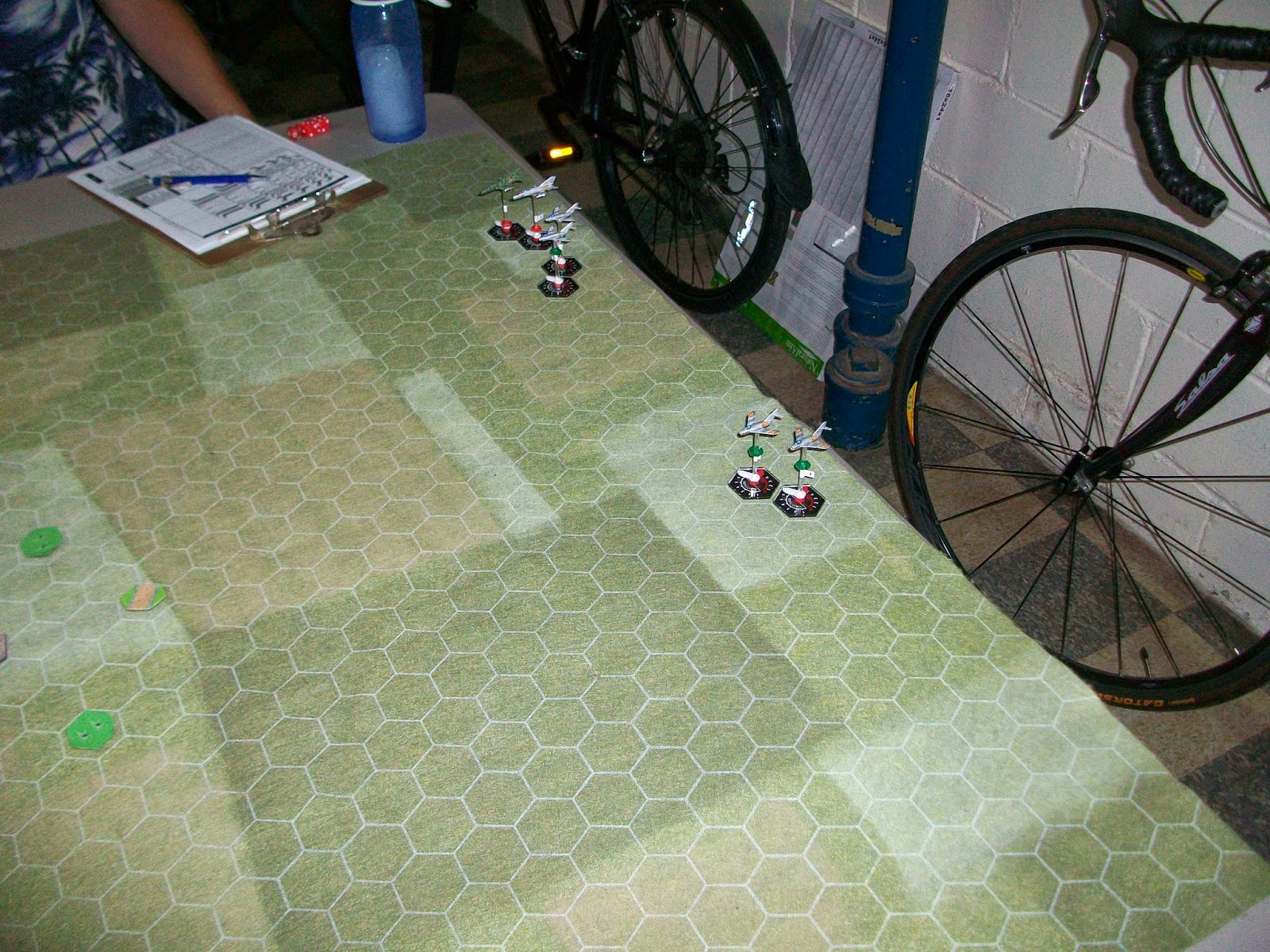 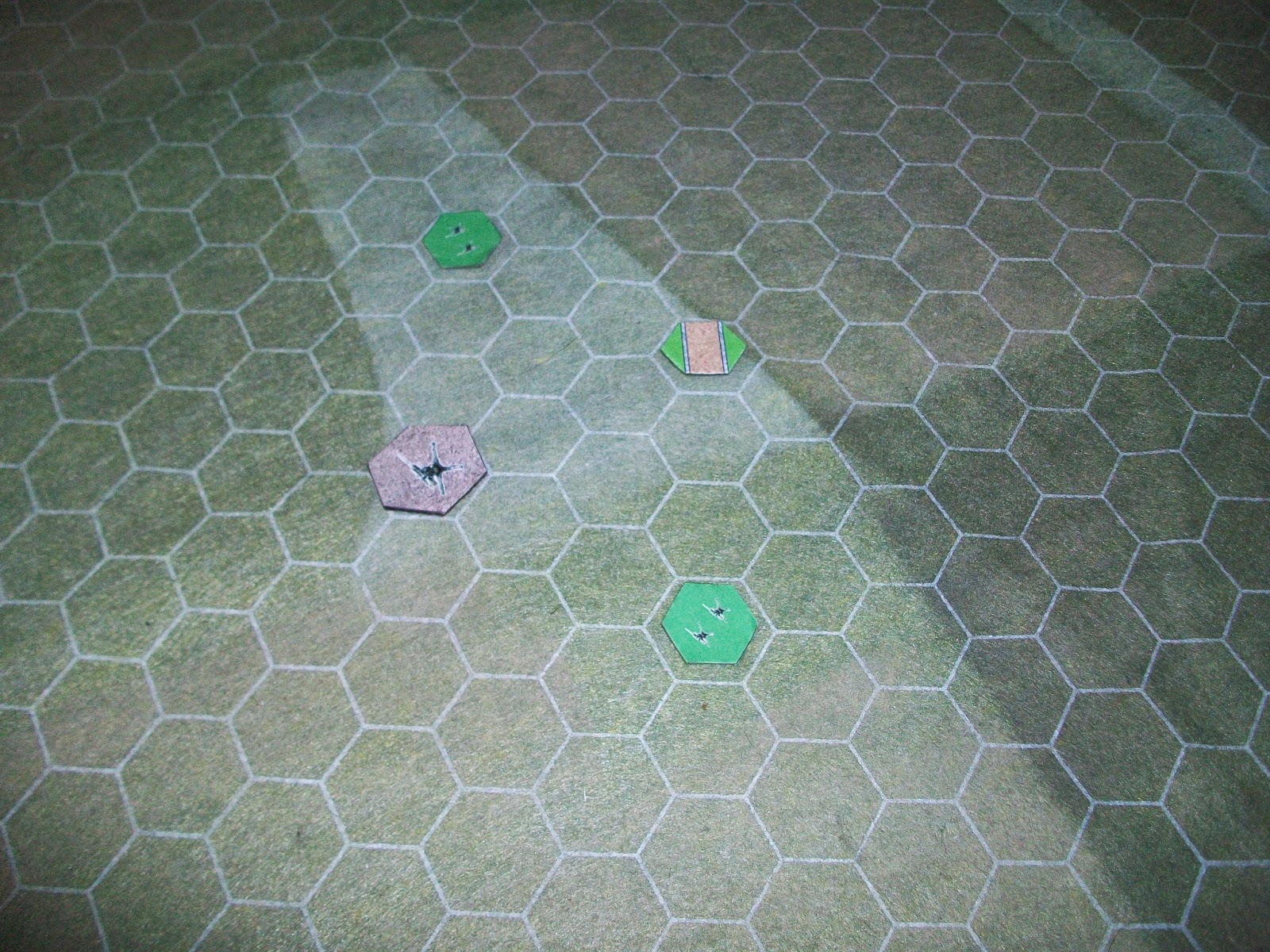 The US setup with the Crusaders in the middle of the board and split the Skyhawks into two groups on each flank of the Crusaders. We realize now that it would have been much better to have reversed this setup with the Crusaders on the flanks. The setup hurt us later in the game with the Crusaders concentrated so.
Fortunately for us as we approached the vaunted target, the Vietnamese players weren't able to get a lock on us easily with their SA-2 Sam battery but just before the Vietnamese engaged with their aircraft they got a hit on a Skyhawk with one of the flying telephone poles and blew it out of the sky with the poor pilot sharing the fate of the aircraft. The Mig-21's where busy trying to get into a position to shoot and a section of Mig-17's took long range shots at the Skyhawks and missed. I split off a section of Crusaders to attempt to help cover the two Skyhawks that were being attacked by the 2 Mig-21's and 2 of the Mig-17's while the other section I took down to the deck to strafe the AAA emplacements in an attempt to clear the way for the Skyhawks bomb run. 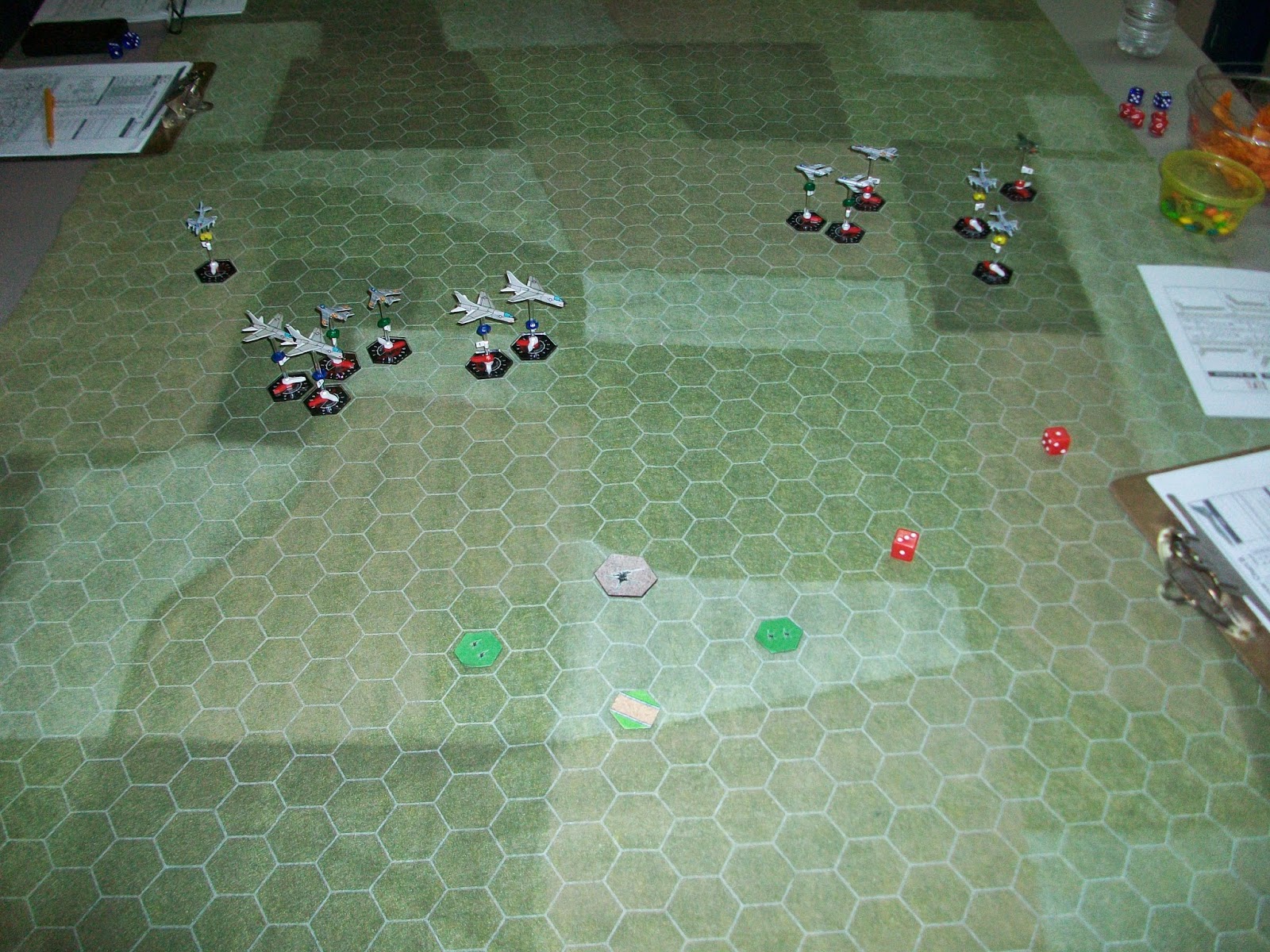 [Situation after SA-2 has downed an A-4]
The Mig-21's pulled a fancy maneuver to get into position to fire their air to air missiles and the US team knew we were in trouble. The good thing is when you perform an extreme turn you're not able to fire your missiles so it bought us a little time. I was struggling trying to get my Crusaders into a position to shoot the Mig-21's, while doing this I allowed the trailing Mig-17's to take close in shots of me. The dice gods where with me and both Mig-17's (Green pilots) rolled a double 2, and a double 3 causing them to miss but more importantly run out of all ammunition and forcing them to leave the board to keep from giving the US players easy Victory Points. On the other flank the lone A-4 skyhawk was being pursued by the other two Mig-17's with no fighter cover nearby for them.  One of those Migs taking a shot and hitting but the Skyhawk was able to shake off the hit with a good save roll. The 2 Crusaders that went down on the deck were able to take out the Medium AAA battery, but missed taking out one of the Light AAA batteries. The SA-2 battery must have had a green crew member operating the Radar as they continued to fail to get a lock or would get a lock with a delayed firing allowing the US player to duck down below it's minimum shooting height. 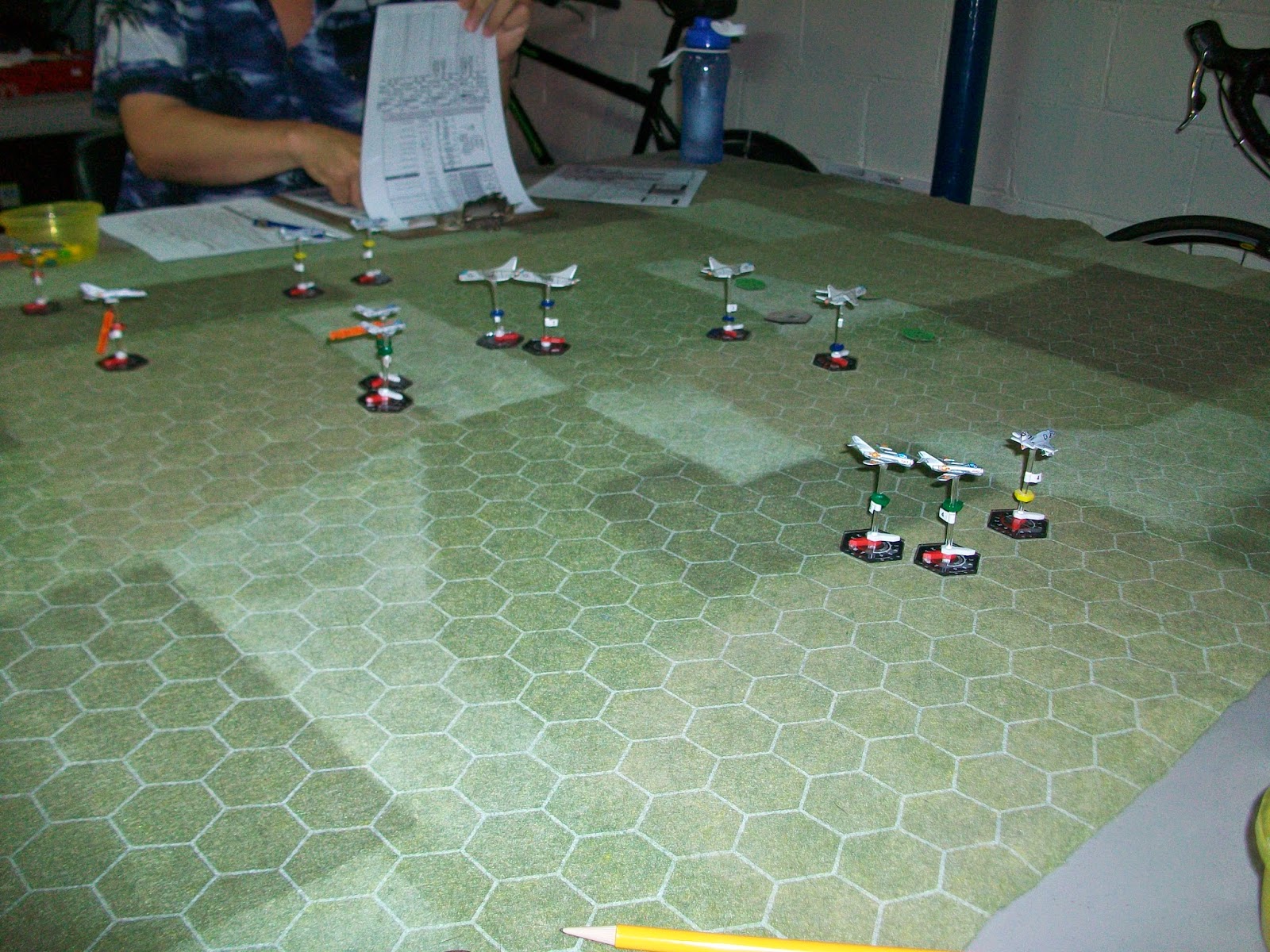 [Orange markers on aircraft represent the use of Afterburners]
The meat of the battle was about to begin. The Mig-21's had maneuvered such that they now were able to take a missile shot at the A-4's and shoot they did. An Atoll missile streaked in on one of the A-4's with the pilot unaware and struck the aircraft causing engine damage and the pilot decided that at this point it was better to dump ordnance and make for home. The Crusaders trying to cover those skyhawks could not get into position to fire missiles but did get up close and personal to use guns but the shots went wide. 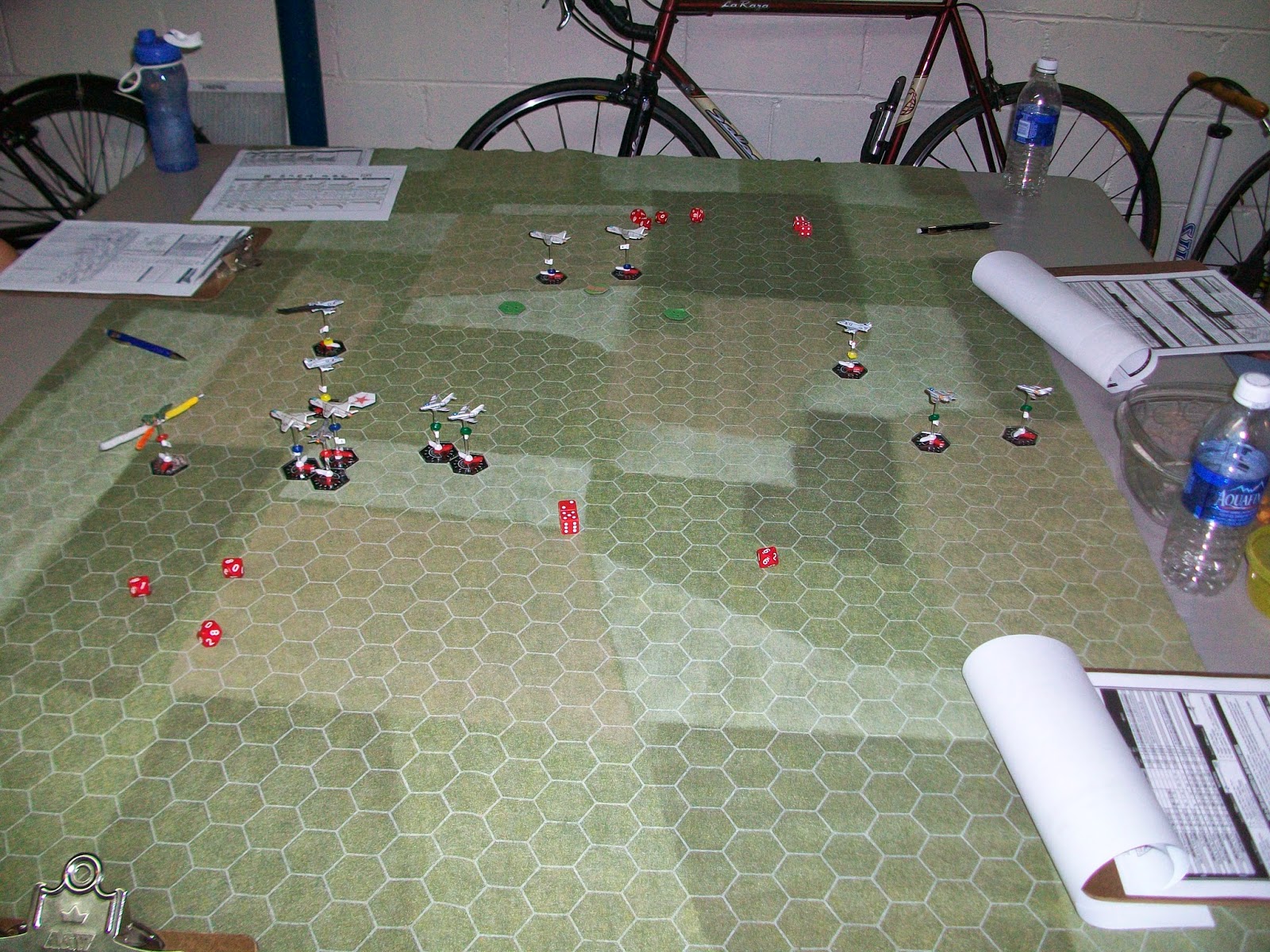 [black markers are used for engine damage, white for frame]
The two A-4's left that could still bomb the bridge trudged on to complete their mission, the destruction of the Dragon's Jaw. The first A-4 went in and missed the bridge bringing groans from the US team. The Vietnamese team now desperately tried to shoot down the last mission capable A-4 down and got hits but again the A-4 passed it's robustness test and flew over the bridge dropping its bomb load and this time got hits. As matter of fact the A-4 pilot rolled box cars and thus earned the US team two hits on the bridge. At this point the Skyhawks scrambled for home with the Crusaders doing their best to cover them. The US team was ahead in points but only by 3. The expert flying of one of the Mig-21's was able to get a parting shot at the fleeing Skyhawks but fate was not with the Vietnamese team this day as the missile fell off the rail harmlessly toward the earth. 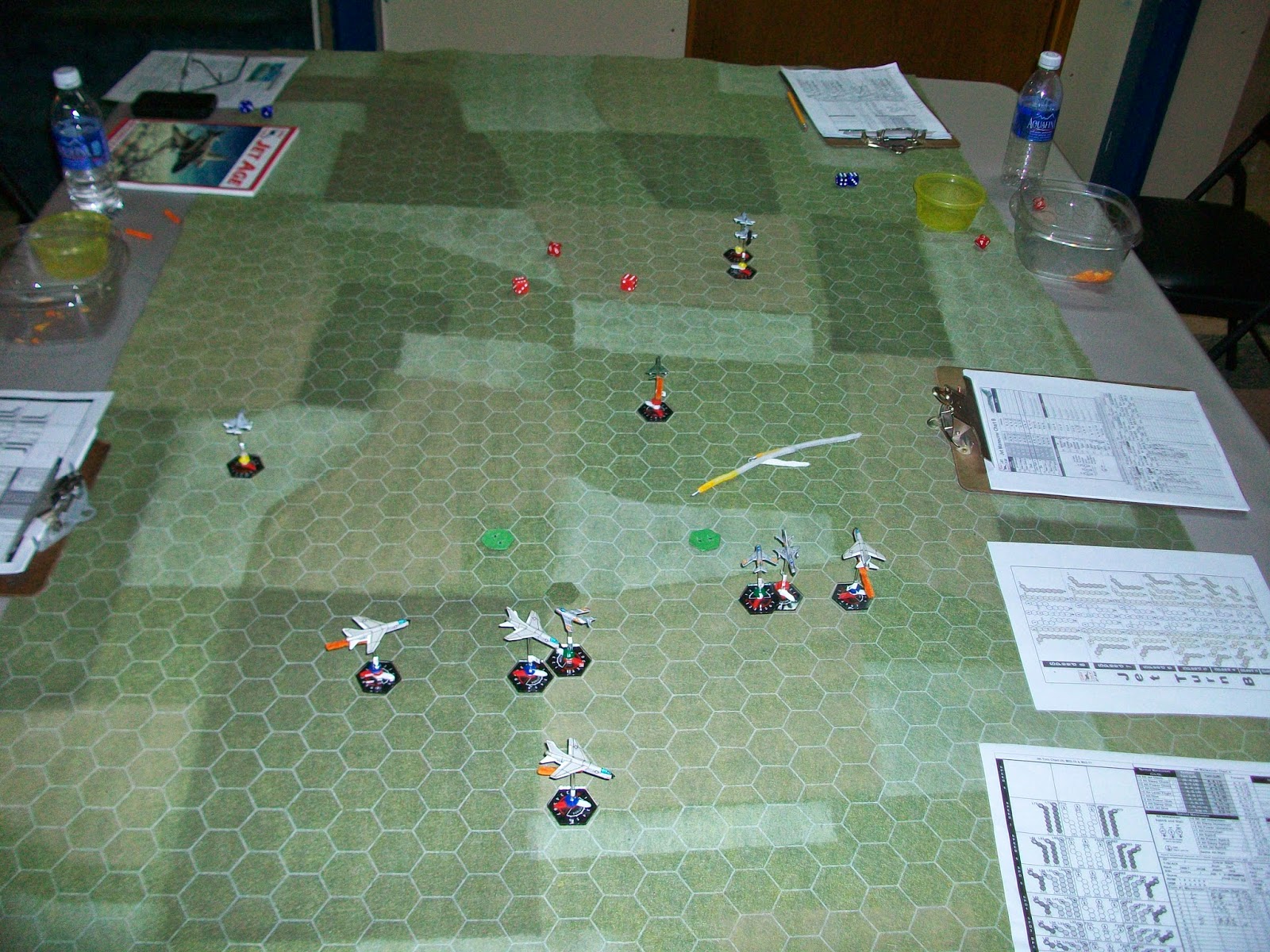 [The US team breaks off the fight and heads for home]
At this point the opposing teams agreed to end the game as the US Crusaders had a 16 missile to 2 advantage and were capable of putting distance between themselves and the Mig-17's (plus we were all ready to head to the pub to drink to a gloriously well done game).
This scenario was provided by one of the gentlemen from the CY6 Yahoo page and we found this scenario both enjoyable and balanced. I don't know who the gentleman is that wrote this one, but our thanks go out to him for coming up with a good one.

Well that's it for now, hope you enjoyed the read, and remember to Check Your 6!

[As a side note both sides are using early versions of their respective sides heat seeking missiles and one must be in the rear aspect of the target to get tone.]