Well whatever I had over the holidays not only wiped me out, but my motivation to paint as well. These last two days or so I am just now starting to feel like doing it again. The thought of it before was like..... well for no better word, bla!

This Grenzer is the last figure I had to paint from Infinity's "Operation: Icestorm" box set. The figure didn't really excite me so I kind of stared at it for a long time not doing anything with it. Well my change in heart to push myself to get this one done was because of the Multi Sniper rifle he is equipped with. It was a must have piece of equipment to go up against my arch rival Rob with his Panoceania faction.

So of course I had to paint him up standing on a crushed helmet of a Panoceania dude. Quite fitting I thought. Anyways I hope you like what I have done with it. 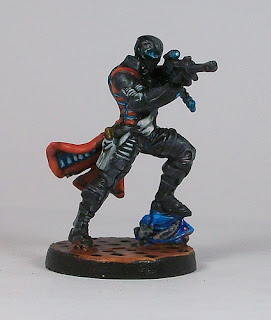 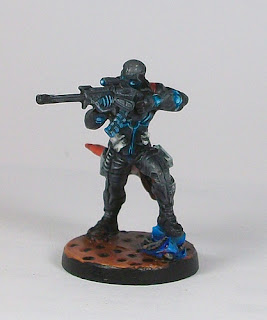 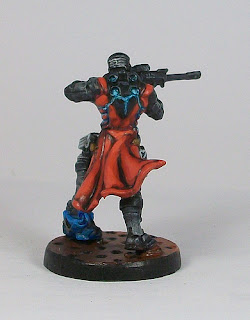 Cheers, and thanks for looking
Kevin

Grand kids, you gotta love them, and I do mine. I walk to the bus stop every school day to greet them and walk them home to baby sit. They are only at my house for an hour to hour and a half most school days.

What does this have to do with the first miniature game played on the very 1st day of a brand New Year you ask yourself? Everything. It's not that I mind baby sitting, it's them going to school and then coming home. You know the great catch all of all disease places other than hospitals.

So of course my grand kids have been sick through the holidays, and my daughter, so that means I came in contact with whatever virus they have, and guess who's sick now. Oh I was in denial and kept saying it's the frozen hell of Michigan weather getting to me. It's my allergies, it's this or that, but I am not getting sick dammit!!!

Wrong, today I feel like I was run over by a bus. But yesterday I had enough strength to play my good friend Rob in a game of Infinity.

We played 200 points Limited Insertion rules (basically that means you can't have more than one command group, limited to ten troops.), and the scenario played was "Firefight" from the Human Sphere book.

It all came crashing down on me at the end of turn two it was over. Rob played better, rolled better, felt better, it was written in scripture and foretold that I was going to have a beat down on me.

1. Don't play when you don't feel good.
2. Don't setup your dudes in the open on turn one and then give your opponent first move and expect him to be a nice guy and not maneuver and light you up on turn one.
3. Infinity is meant to play with lot's of terrain, so set up a lot of terrain (mental note build more buildings)
4. Start using the traits of your soldiers better and use smoke grenades.

Still I had fun, and it's mostly because Rob is a great guy to game against. Hopefully we get more opportunities to shake this game out more and learn more of the stuff we haven't even scratched the surface on.

Here are a few photos of the board, and Pano setup and Nomad setup. 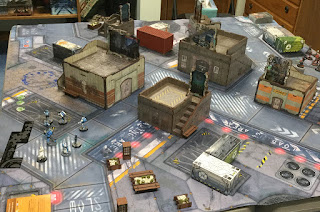 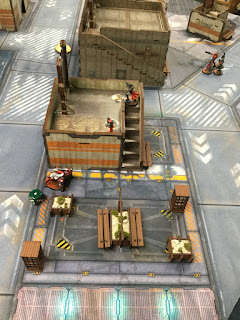 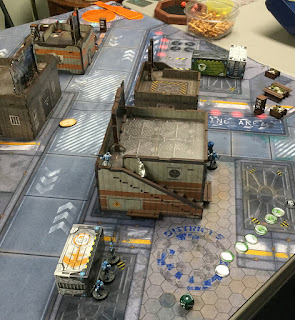 Mostly this post was picture proof that I actually played a game on the 1st day of the year. I wish you all a healthy and prosperous year. Here's to having some fun gaming!