Almost ready to head out to CincyCon and used that as motivation to paint up these Saxon/Viking-ish casualties from Gripping Beast. There a lot of different ways to show fatigue on units in Saga, I placed them on 40mm round bases and flocked all of the base except and area where I would place a die to represent how many fatigue a unit was at. This was so the die would lie flat. Nothing fancy but thought I would show them off. 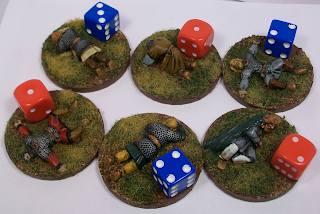 Thanks for looking.
Cheers
Kevin

A few weeks ago an old friend and I made a trade. I picked up these 8 painted Steppe Nomads that he had gotten in a trade with someone else. He has a whole army already and didn't need them so offered them to me. Hey how could I refuse? I have so much crap to paint it's not funny. I was pleasantly surprise when they arrived. They look pretty good. So whoever you are out there that painted these, nice job!

I received them unmounted and non-based, so the first thing I did was get my handy pin vise out and went to work drilling and then pinning the riders to their mounts. Glued them on the bases and did the flocking etc. and presto change-o! I now had 8* nicely mounted Steppe Nomads to add to my Rus Prince warband.

So I present my Steppe Nomads: 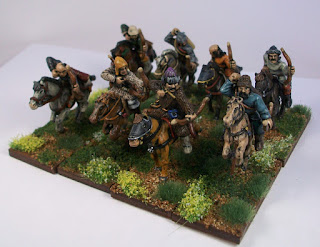 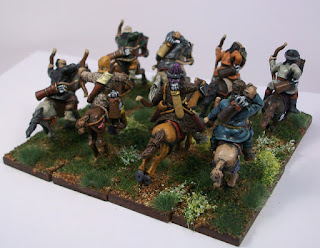 I finished up my Black Hood unit for my Rus Prince Saga warband. Here is a little history about the Black Hoods who they were, and where they came from. This is a quote from a source I found by "Stephen W. Richey" and here is a link if your interested in his sources Horse Nomads

Kimaks (or Kimeks): They were a primitive people living east of the Ural Mountains along the Irtysh or Ob Rivers. They eventually became a nomad elite who settled down to rule their lands from fortified towns:

Kipchaks (or Kipchaqs or Cumans): They were derived from the westernmost clans of the Kimaks. They retained their nomad lifestyle after the other Kimaks settled down. Migrating westward in the mid-11th Century AD, they pushed against the Oghuz Turks and occupied what had been Pecheneg lands in the Ukraine. They allied themselves with the Greek Christian Byzantine Empire to inflict a crushing defeat on the Pechenegs in 1091. They were noted for their warrior women. The Kipchaks made their first major attack on the Russians in 1061 or 1062. They made periodic raids on the Russians to obtain loot and slaves and to forestall Russian settlement on steppe grazing lands. Most of the time, a state of war existed between most Russians and most Kipchaks. Still, on occasion, some Kipchaks served as mercenaries for some Russian princes in wars against other Russian princes. The Kipchaks made repeated raids on the Byzantines and Hungarians as well as the Russians during the period 1070-1100. The Russians responded by attacking the Kipchaks in 1103, 1109, 1111, 1113, and 1116, inflicting serious damage on them. Small remnants of the Pechenegs and Oghuz who had been under Kipchak control were thus "liberated" and entered Russian service. Kipchak raids on the Russians picked up again and became annual events by the late 1160s. The Kipchaks sacked the Russian city of Kiev in 1184. The Kipchaks became defensive allies of the Russians against Genghis Khan's invading Mongols in 1223. The allied Russians and Kipchaks were badly defeated by a small advance force of Mongols at the Battle of the Kalka River in that year. The Ukrainian realm of the Kipchaks was obliterated by the Mongols of Ogedei Khan, Genghis's son and successor when the Mongols returned to the Ukraine in full force in 1239-1240. Some Kipchaks served as mercenaries for the Byzantines from the 11th to 14th Centuries. They also served as mercenaries for the Christian kings of Hungary in the 13th and 14th Centuries. The Kipchaks who remained on the Ukrainian steppe as subjects of the Mongols eventually gave a strong ethnic tint to the Mongol Golden Horde . The Russians called the Kipchaks "Polovtsians," as in the "Polovtsian Dances/Stranger in Paradise" music composed by Borodin.

Finally here are some photos of my work. The figures are "Gripping Beast" and are large 28mm figures. 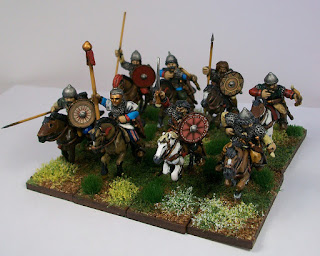 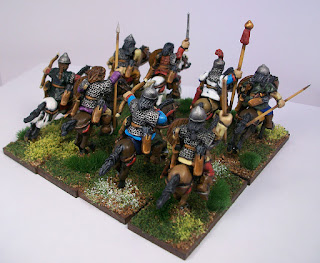 As always thanks for looking!
Cheers
Kevin

I've had this model in my inventory somewhere around eight years now. Animie, robot, mecha cool looking thing that caught my attention, and of course, had me buying at a convention I was at back in the day. I had no idea what Infinity was and really didn't care cause I just wanted to open the box and look at this all so cool looking model. Yep something cool just so I could add it to my giant unpainted lead pile. It turns out that the "Szalamandra" is a TAG (Tactical Armored Gear) or a parabot where a human pilot sits in side and controls it. It has heavy armor and of course carrys heavy weapons and can move around quicker than a foot soldier.

Fast forward to today and as you know I began painting Infinity models for the sake of actually playing Infinity. This because of my friends sudden interest in also wanting to paint some figs and play the game. All good stuff for me! So here I am with this primed but unpainted behemoth calling out to me saying, "Kevin paint me, don't buy more figures until you paint me"! Well I caught myself saying out loud "okay, okay" only to have my wife step into my paint room and ask, "did you say something honey?", .... ahem "no dear" was my reply, you must of heard me cough or something.

So I sat down and painted this little gem based off the original paintings from Corvus Bellis. It's a plain simple paint job, not a lot depth from my brush stand point, but enough to make it a nice gaming piece I think. It was overall fun to paint, but if you look at the belt fed weapon THAT was a super pain (and poorly designed) in the butt to put together. I'm not going to allow anyone to touch it for fear of it breaking off. The belt came in two pieces and I not only had to glue these together but also to the leg feed and to the weapon, which meant I had to carefully bend and shape said belt to actually go between the two in a way they would line up. On top of that you didn't have a slot to glue the ends to but a knob instead. But in the end I did it and even got a little inspired to attempt some weathering, though I could and should have done more I was ready to be done.

So I present for your viewing pleasure my humble attempt at a Szalamandra. 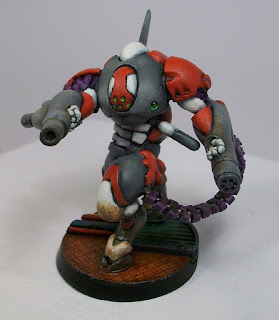 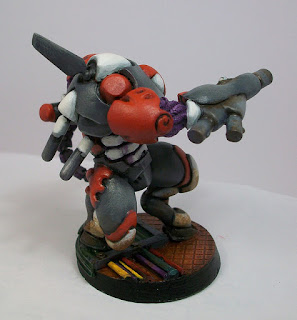 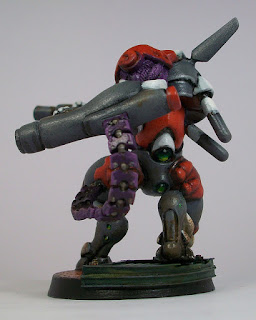 Cheers and thanks for looking
Kevin