Another go at Saga, a 6pt "Clash of Warlords" debacle

Well I had another go (with my gaming friend Mark and his pack of wild Vikings) of the scenario Clash of Warlords. As I am starting to get more of a hold on the rules, I figured now was the time to get a hold of tactics side. Unfortunately in my older muddled brain I thought I was going to get an armor save bonus for melee in the woods, and it turns out that you only get that for shooting. My kingdom to be young again and have all of my mental faculties working smoothly once more! Oh well, it was a lesson learned, woods don't really help you unless your facing a shooting army which the Vikings are not. We both used 6 point armies this time around. Mark deployed two warrior units of 12 each, and three of Huscarl 4 each (one of which where those Amazon demons he calls berzerkers). This gave him an advantage in that he could afford to lose one unit and not effect the number of saga dice he would get. I deployed two units of warriors 8 each, and two units of Huscarl 6 men each, and one levy unit with bows of 12 men. I deployed the levy on my left flank and should have bloody well put them in the center forward, at least they would have been in position to get at least one shot off. Here is a picture of the starting positions (please excuse the sacrilege of some unpainted units but both of us need to paint one more unit to complete our painted armies). 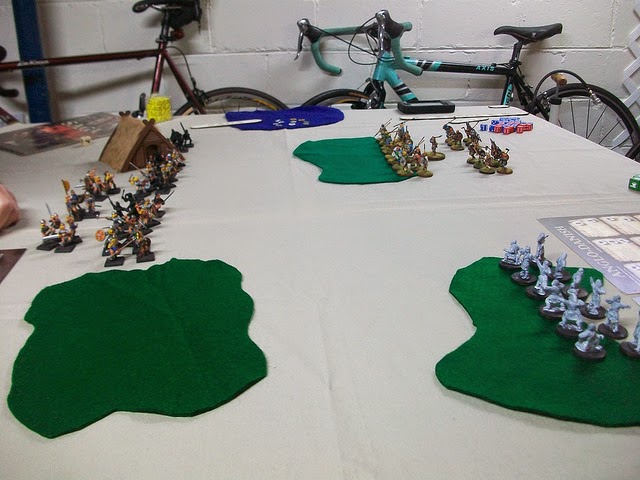 The battle did not start out well for me. It seems I am doomed to not roll any hits at least once or twice when I play Mark. Of course he taught me a few more tricks about his Viking dogs. Like having your Warriors in 12 man units so you can use the ability Valhalla, where you can remove up to three warriors engaged so you can gain 3 attack die for each. Pretty powerful stuff when you have all 12 engaged and are basically doubling your dice. Yes indeed the Vikings have many little tricks that make them a very offensive oriented army. But getting back to the game. Mark basically took the fight to me right up the middle and starting pounding on my Anglo Danes. He took out one of my Warrior units in his first engagement which left me down a Saga die. I counter attacked and smashed what was left of his Warrior unit (except one model, the other thing it seems I can't do against Mark is take out a whole unit) and my last Warrior unit took two causalities. Here is another picture of the situation at the moment. 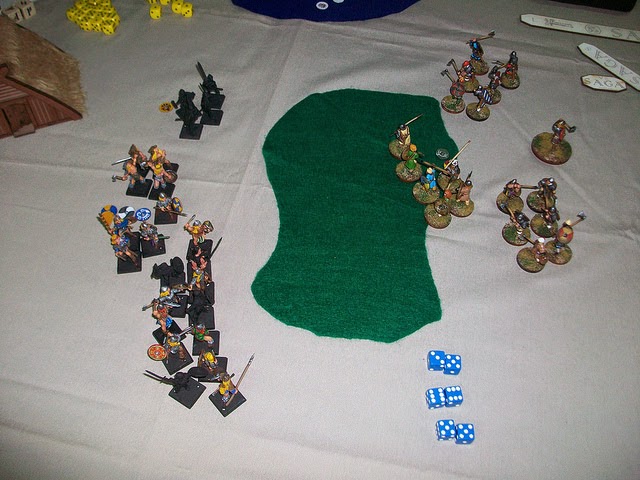 On turn 3 Mark used one of his Huscarl units to chase off my Levies, which was fine by me, and reorganized his line. My last Warrior unit then attacked his Warrior unit he moved up into the woods and sadly I plebe with my attack dice once more (again story of my life against Mark), but that not being a problem with Mark he kindly took 5 out of my remaining 6 models. I smartly activated them again for a move back to the rear to save a loss of another Saga die. 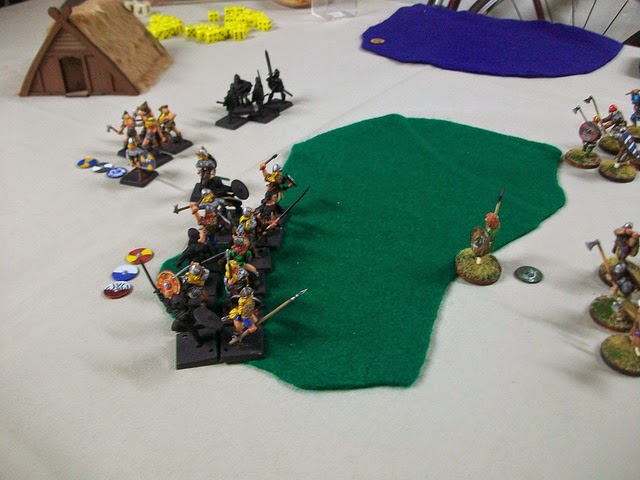 Turn 4 Mark finished off my hapless Levies and reorganized his line some more and moved them up. I positioned myself to strike at his Warriors that had moved closer to me in the woods.

Turn 5 I unleashed my Huscarl for a little revenge party against his remaining Warrior unit, hoping and praying to the ancient gods that I would have good fortune with the dice! My dice were good, but not good enough to take out his entire unit. The dog again escapes with three models, but has four fatigue on them. My Huscarl got carved up as well, losing three models.

Turn 6 (and what was supposed to be the last turn, but again I didn't read closely enough and we played out the game for 8 turns) Mark charges in with his Amazon demons and finishes off my poor Huscarl but I was able to take them out as well. Worth the price I must say! 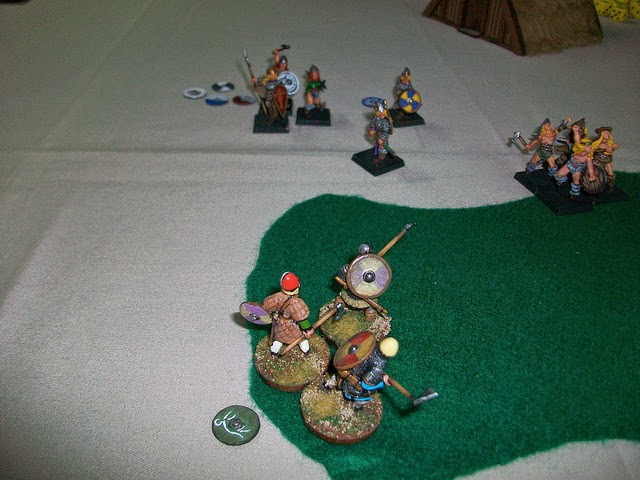 At this point Mark would have won on points alone. We did play on and we bashed each other down to a hand full of models but sadly my Warlord went down giving Mark the game he had in the bag already at the end of turn 6. Playing Mark is always a pleasure. His laughter is contagious and his humor, well let's say he needs to work on that one a bit. My last picture is his humorous memorial to my fallen Warlord.... 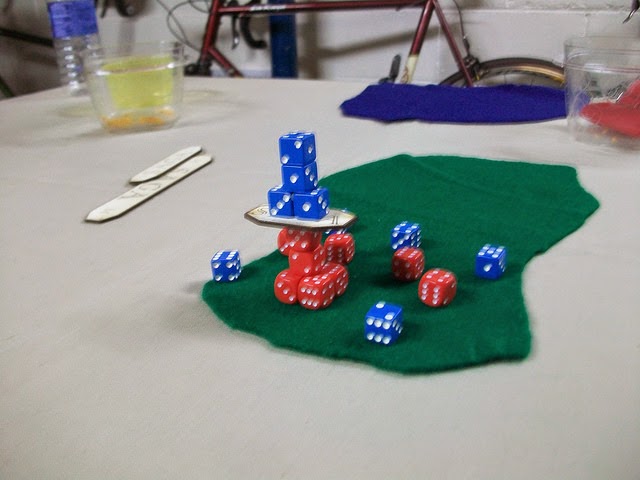 So my friend Mark was able to come over and do a quick game today. We played the Saga scenario Clash of the Warlords with 4 point armies (I did mention the word quick). Mark played his Viking Army, and I my Anglo Dane. We were both a little rusty with the rules but it came back to us quickly.

Both of us knowing we had a time limit we decided to throw tactics out the window and throw down (not to mention with these armies it really is all about throwing down!!!). I charged straight up the middle leading out with a Warrior unit and struck one of his warrior units in an even battle. Fortune was not with me and I totally pleeb on my dice throw. Mark did not do much better but did inflict 1 hit that I could not save and this caused my unit to disengage. Unfortunately I had brought up my other units a little to close up, expecting victory, and Mark's quick counter attack with those same warriors threw my line in disarray. Perhaps the word disarray is not appropriate as he totally destroyed my unit for a loss of only two figures and this caused a fatigue on all my other units within short distance. 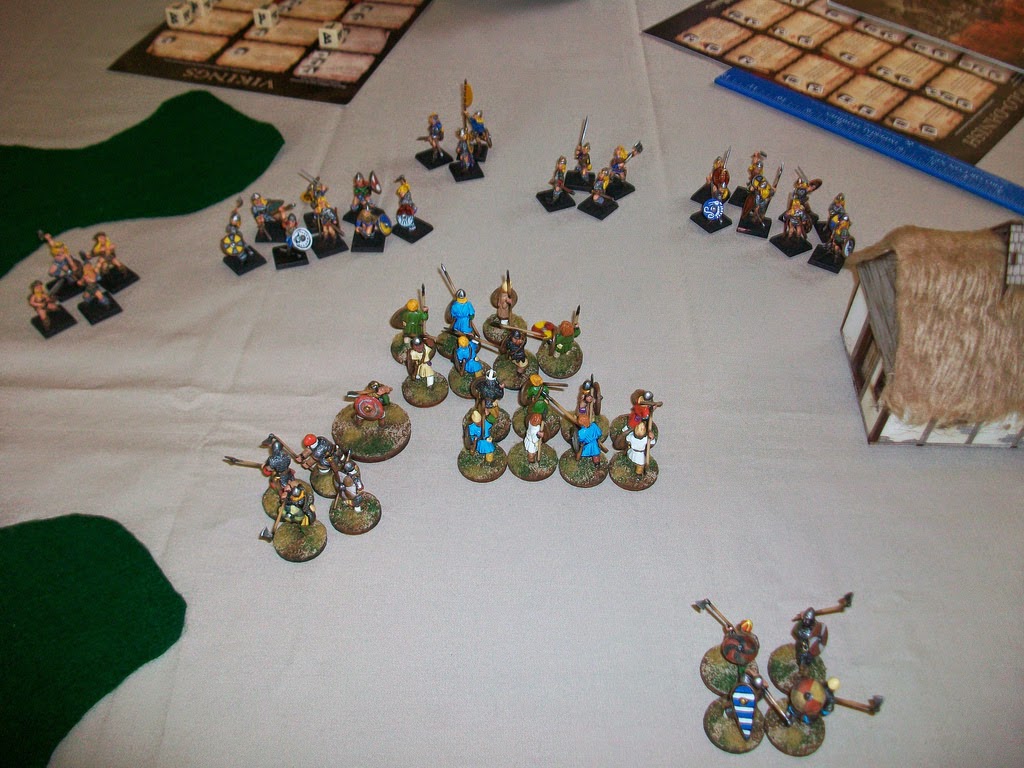 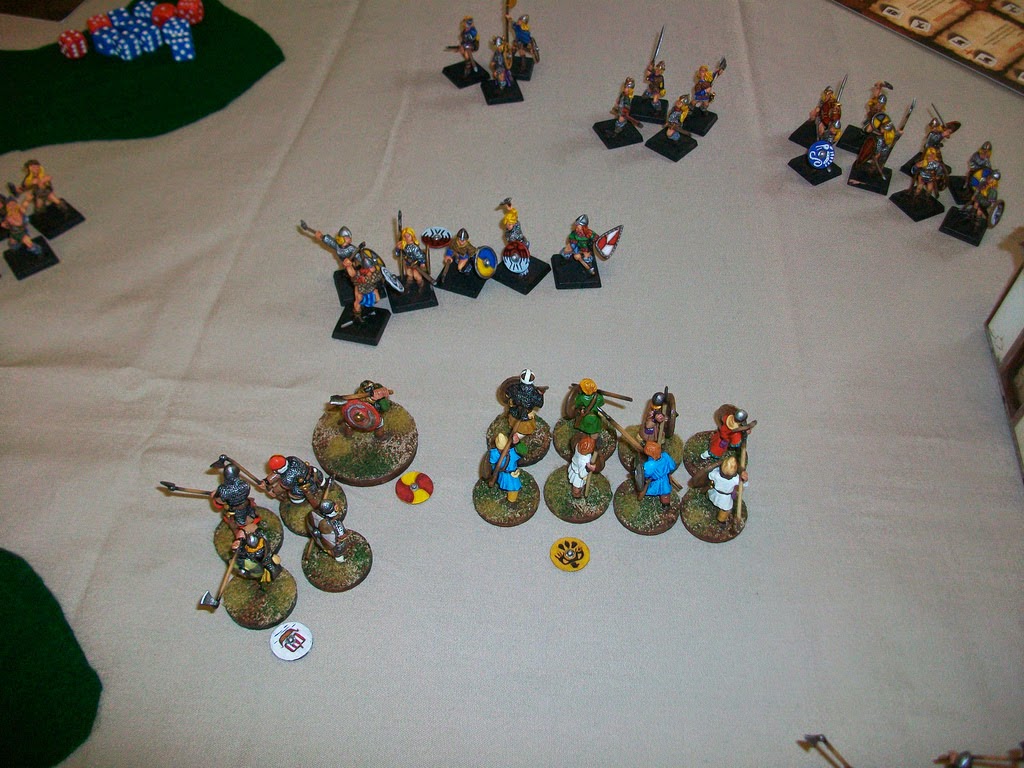 Not being one to be shy I thought I would teach my smiling opponent a little lesson about side by side and struck his now only 6 warrior strong unit with a fresh unit of Warriors and my Warlord. Instead of an overwhelming victory, my troops were further disheartened as two of his warrior's escaped destruction. My now still smiling opponent had a 1 saga die advantage and a secret weapon he was about to unleash on my unsuspecting Warlord. My Warlord was about to learn about the wrath of a woman (or in this case she devils from hell, and not just one but a bunch!). By the way Mark uses Amazon Queens or princesses or something like that for his Berserker's. 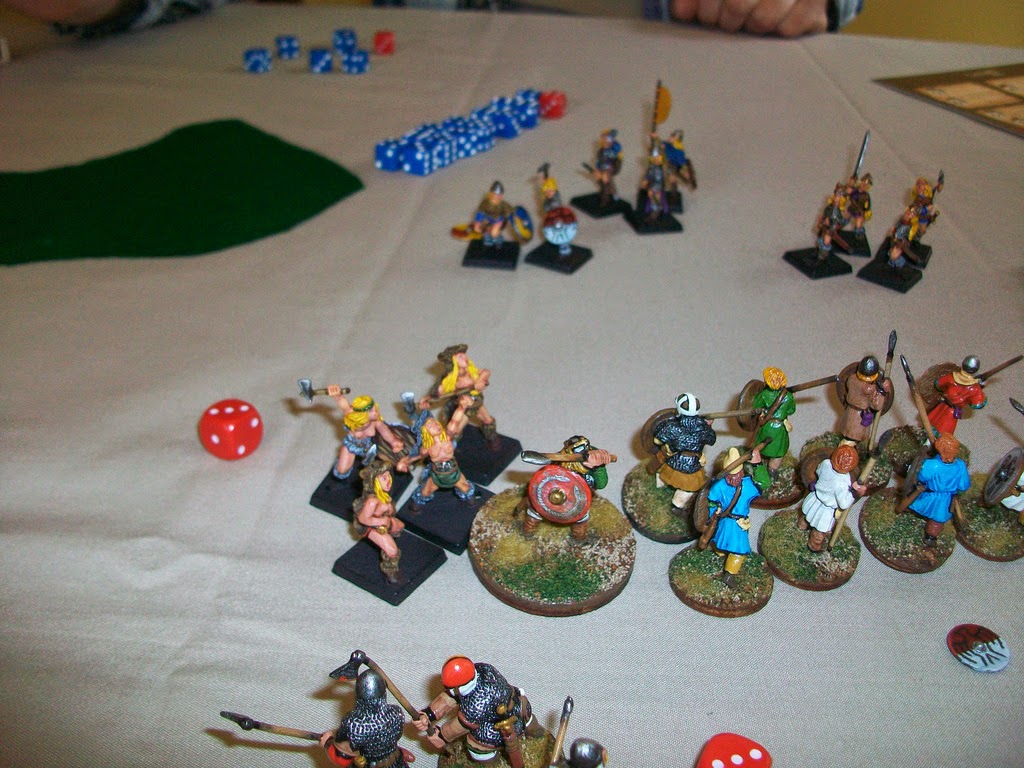 The she devils from hell smashed into my Warlord bringing with them 21 dice to roll against my poor Warlords 5. Another lesson taught to me about the Vikings was all the offensive abilities that they bring with them to the table and my opponent was not about to show me any mercy and threw down the hammer. With Thor, Ullr, Frigg, and Heimdal it was a pretty assured thing that he would take down my Warlord. Of course it didn't hurt that the she devils from hell brought 16 dice with them to start out with! My Warlord was so rattled he even forgot to order shield wall and stood there mouth agape as I was taught a lesson about being overly brash with your Warlord. 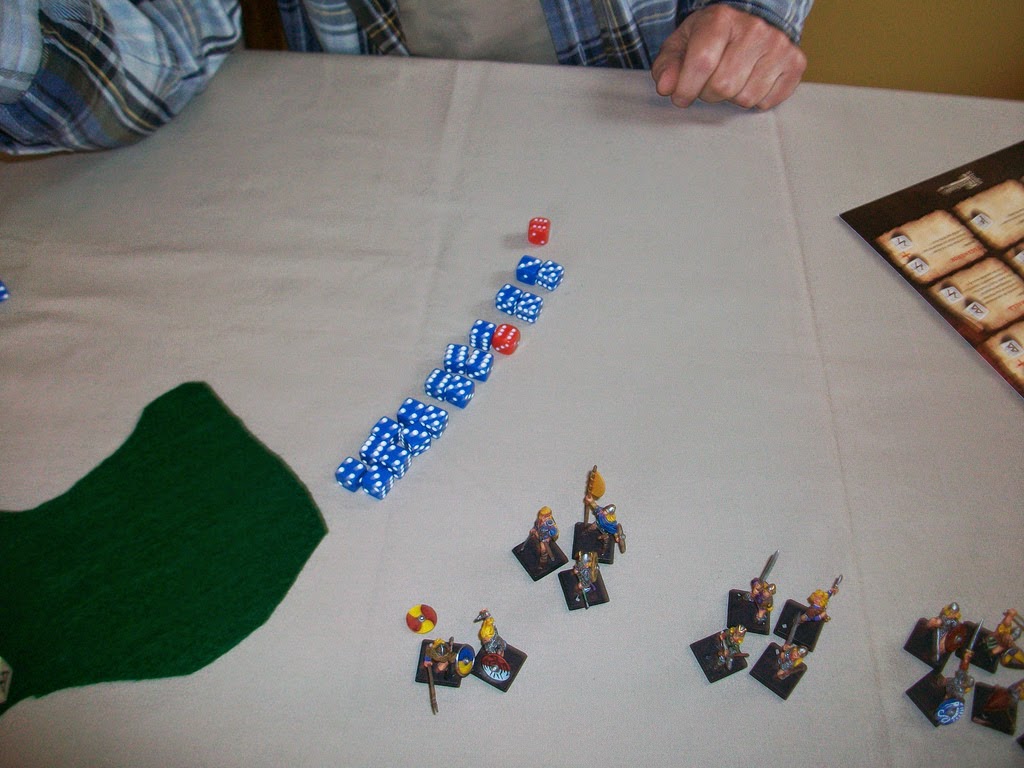 Yes that's right! Count them up! In the end he inflicted 19 hits of which I saved nine, but could not overcome the ten hits as I didn't have that many troops around me to absorb that many hits for the Warlord. On top of that with the ability Thor, any remaining figures would get to attack again (did I mention I only took down 2 of those accursed she devils). 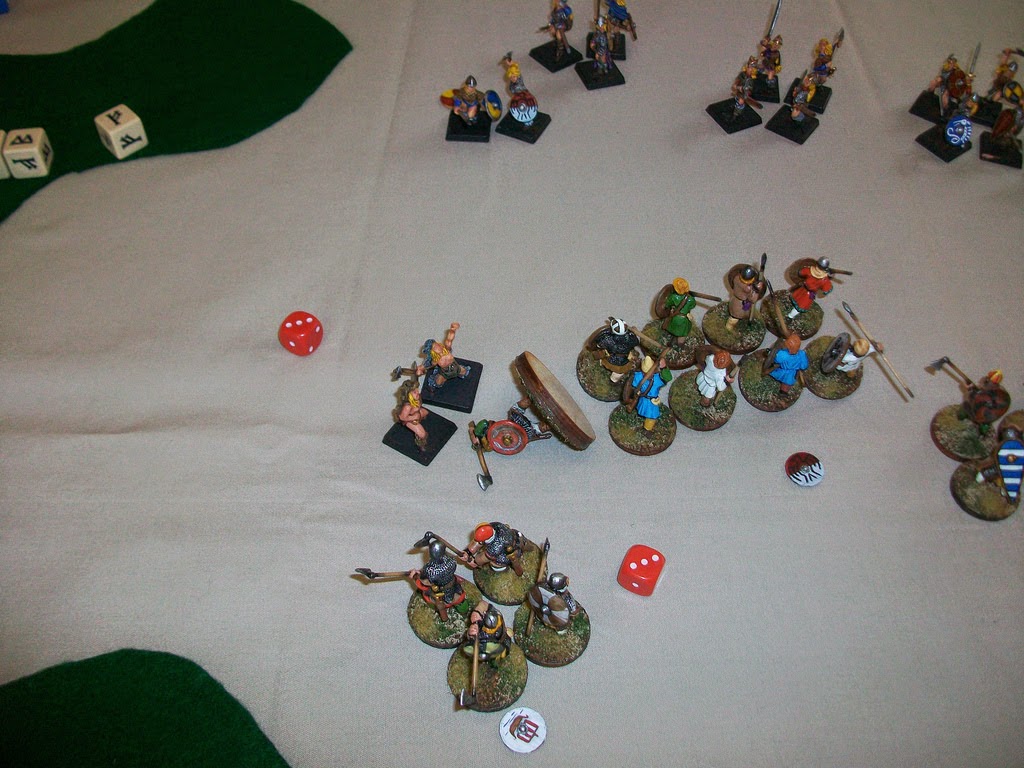 Even though it was brutal and quick it was good to get a game in and brush up on the rules. I also must say even though I got a good ass kicking I still had fun and appreciate my opponent for taking some of his time out of his day to get a game in.

Saga rocks!
Posted by Kevin at 3:54 PM No comments: