I've had this thing for the Infinity figures and fluff for years (really since the first edition came out and I have never played and now it's up to 3rd Edition). I've collected some figures here or there with the thought that only having to paint up a handful of figures for this Science Fiction skirmish game would be fun, but this never came to fruition. I do love the figures because of their Japanese Anime look. Very colorful, and anatomically correct in proportions (which is a small pain after painting Heroic size figures, something to get used to).

Well an opportunity presented itself these past couple days, why with finishing my first unit of Highlanders for my Jacobite '45, I thought I'd do a few Infinity figures before I dove back in to my Jacobite stuff to finish my second unit I've started.

I like the Infinity line, especially Yu Jing faction. Why? At first it was the attraction to this line of figures TAGs (Tactical Armored Gear) which remind me a lot about Robotech, Appleseed, etc. As to the Yu Jing being a favorite, it's because of the Orange Yellow official color look of this faction. I've followed Ángel Giráldez paint formula (well mostly) and really like how he combines colors to get this orange-ish yellow look. Other than that I've pretty much went with the Box art and went mercenary on some color choices.

I've finished my first 3 figures (waiting on finishing the bases until I know more of what theme I want to go with, so raw for now) which come with the Starter Pack that I've had for years (back in 2008 I believe). These figures are the light troops and are called Zhanshi. I'll have three more to paint to finish the box, and probably won't have to do more than a dozen to have a faction to game with. But the rest will have to wait for now as I must finish my 2nd Highlander unit. Hope you like the pictures. 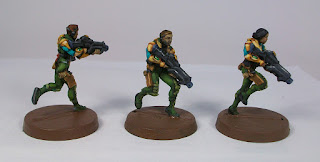 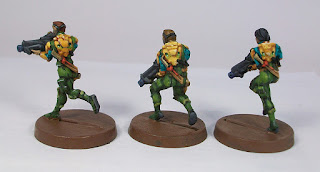 I've been quite busy of late and only just now have a quiet moment to post my first generic Highlander Clan for my Jacobite '45 project. I would have posted this a little bit sooner but realized I had painted 5 figures too many of the sword bearing type and forgot I needed these for my second unit I am working on. The good news is I have five less to paint for the second unit.

I've realized that this may not quite be my cup of tea when it comes to my painting style. I can't paint thin straight lines for crap, but I gave it my best shot and hope that most looking at the figures on the gaming table won't notice from afar. Sigh, oh well, it was still fun and that's all that counts.

In the meantime I hope you enjoy what I have done as I return back to the painting table... ahem... I mean real life projects I must attend to. 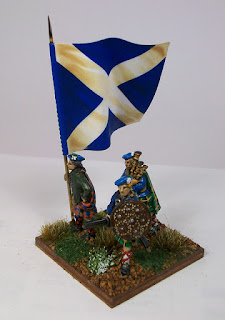 (The above is the paper flag I tried making for first time, worked out pretty good I think) 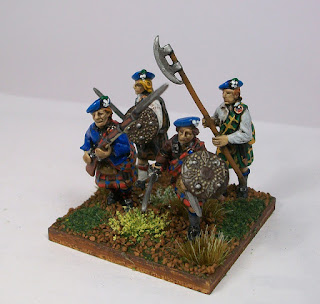 (up close of some of the boys)