Well so far I've loved playing Saga and this after not winning a single battle! That right there has to tell you that it's a fun system if this ole fart keeps on giving it a whirl. Well the losing part my friends is finally behind me. Last Thursday my good friend Mark with his Viking hoard once more graced my humble home and allowed me another chance to regain my honor with my poor lads the Anglo Danes. Mark was fresh back from the convention Historicon where he participated in the Saga tournament and came in second place. Also out of four games played he killed the opposing Warlords three out of four games. Seeing how he's killed mine every time we've played my confidence was not brimming as you can imagine.

Knowing that my Anglo Danes are more of a defensive army I decided that we would try a scenario that would take away the Vikings very powerful offensive tactics whether they defended or attacked. That's right Ladies and Gentlemen I came up with a ringer (meaning I picked out a scenario that benefited me;)). I selected the scenario called Homeland. The attacker is there to raid the enemies village and the defender trying to keep that from happening. You have to bid to be the defender in this scenario and knowing that Mark is an offensive player and wouldn't really take the bid seriously I bid 5 and he 6 (your bids can be from 2 to 6 and that is how many points you can spend on your army). So with a suppressed chuckle I picked out my units and placed them in the village. The village is two standard buildings (max 8 troops each), and one large building (max 12 troops). Order of battle ran like this:

Vikings:
4 Berserkers (made up of his Amazon She Devils)
4 Huscarl
4 Huscarl
8 Warriors
8 Warriors
12 Levy (Bows)
Warlord

Here is a picture of the initial setup (As always click on the picture to see a larger view, you can then right click on enlarge picture and select view image to see original size). 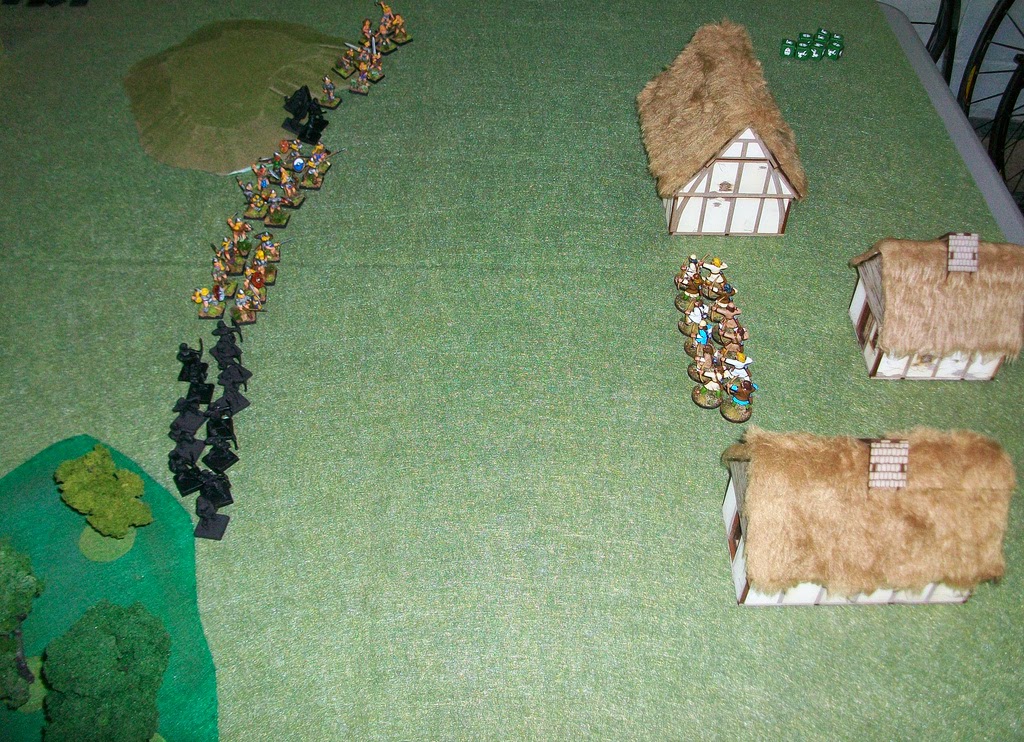 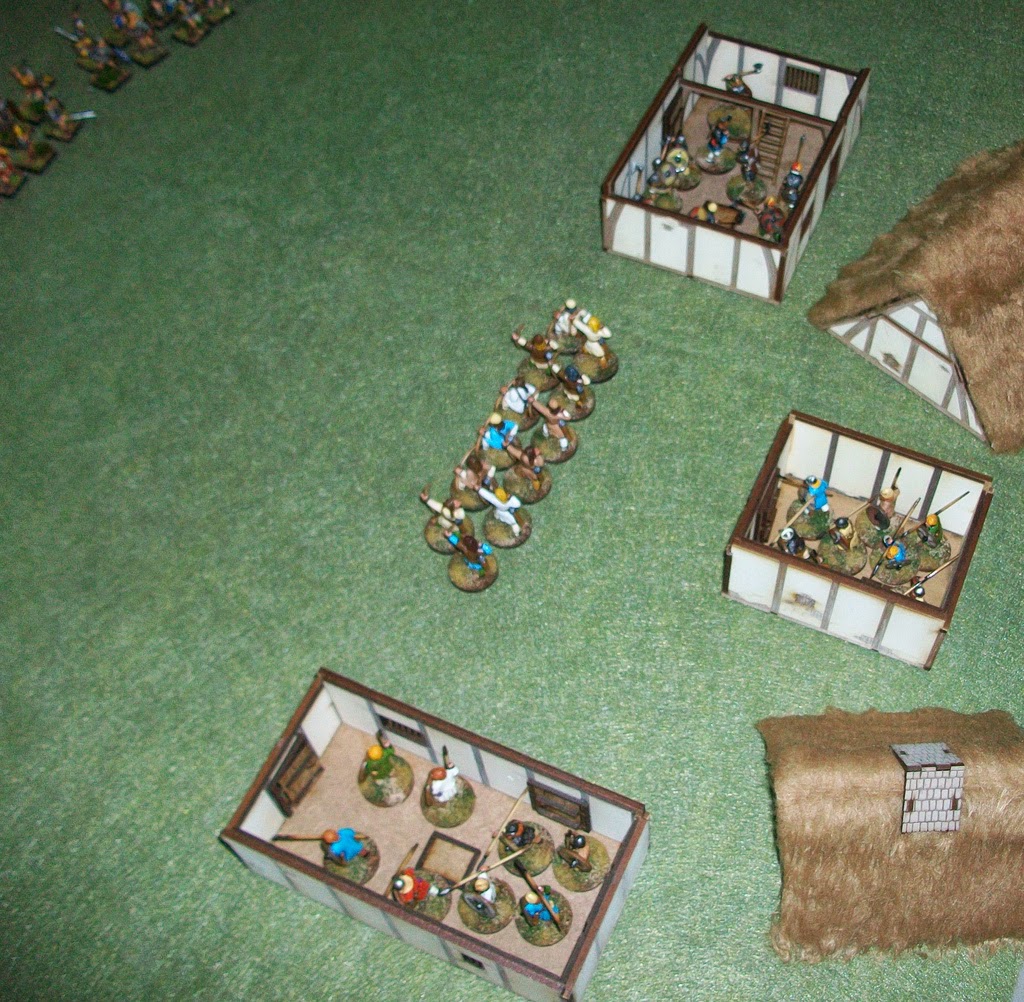 The Anglo Dane player (me) placed the 8 Huscarl unit and Warlord in the large building on the Dane right flank, and in the other two buildings I placed an 8 figure strong warrior unit each, and the bowmen in the middle front of the village. The Viking player responded by placing, from his left to right, the 4 x Berserkers, 4 x Huscarl, Warlord, 4 x Huscarl, 8 x warrior, 8 x warrior, and finally his 12 x bowmen. The player who loses the bid becomes the attacker and gets 6 points to spend and can't set up his troops closer than 12 inches to a defender or building.

Turn 1 was basically the Vikings moving up and his bowmen exchanging shots with mine where I lost 2 figures to his 1. 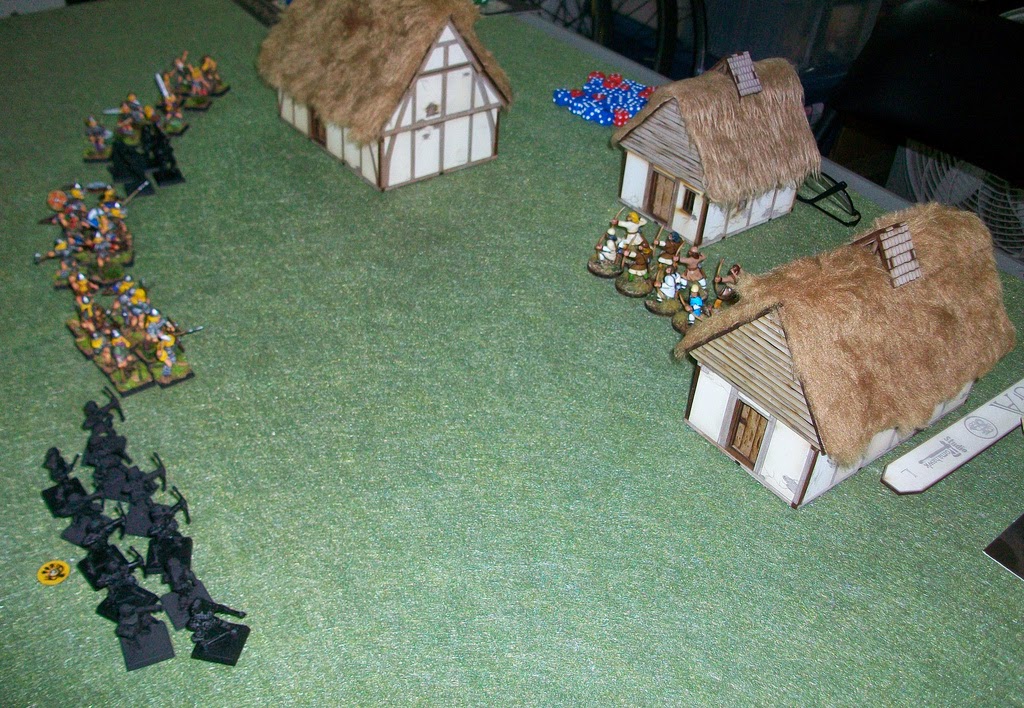 Turn 2 the Viking Warlord pretty much had decided that my Large building on the the Anglo Dane right must have had lots of hidden treasure or something because he launched a fierce attack upon it. His Berserkers came in first like a heat seeking missile and took out 5 of my 8 Huscarl (this with me saving on a 4 or better instead of the normal 5!). The good thing was is I wiped out his little amazon witches from the netherworld. He immediately followed this up with one of his 4 figure strong Huscarl units but they came into the melee straight up as he had used all of his battleboard abilities with the berzerkers. He knocked off two more of my figures but I got two of his in return, but the big thing was he had attrition me down to one figure left and my Warlord. As his final move for the turn he did a side by side with a we obey with his Warlord and his last fresh 4 figure Huscarl unit. Needless to say my poor lonely figure was wiped out without causing him any damage. The nice thing about defending a building is the defender gets to choose which unit the attacker fights, and if shooting the attacker gets to choose. What's more important is the fact that if you don't eliminate all the figures or there is another unit still in the building it's the attacker that has to do a break off regardless of casualties. So during my phase of turn 2 I had a big decision to make, get out of Dodge with my Warlord (which I don't think I could have done because his Warlord was too close to mine and I would have had to come out and battle him), or immediately reinforce my larger building. Well the Warlord had taken a fatigue due to the elimination of the the Huscarl unit so I rested him to take that off and then I did a did a double move with my 8 man warrior over to the Large building from the closest supporting building, and I move my Archers up next to it to try and help support the Large building with bow fire. Here is a picture end of turn 2. 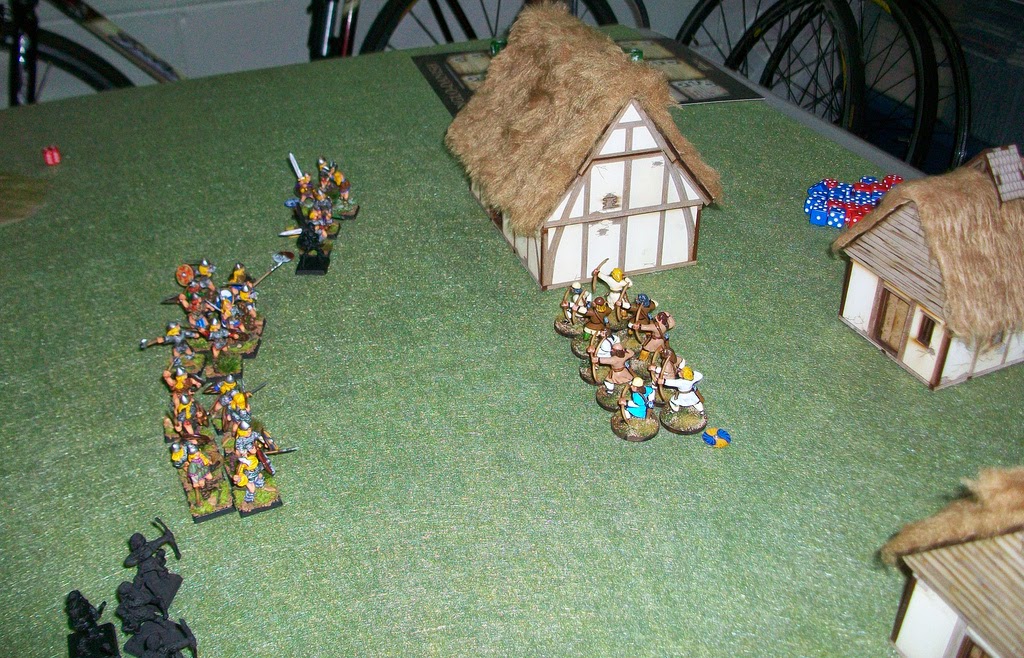 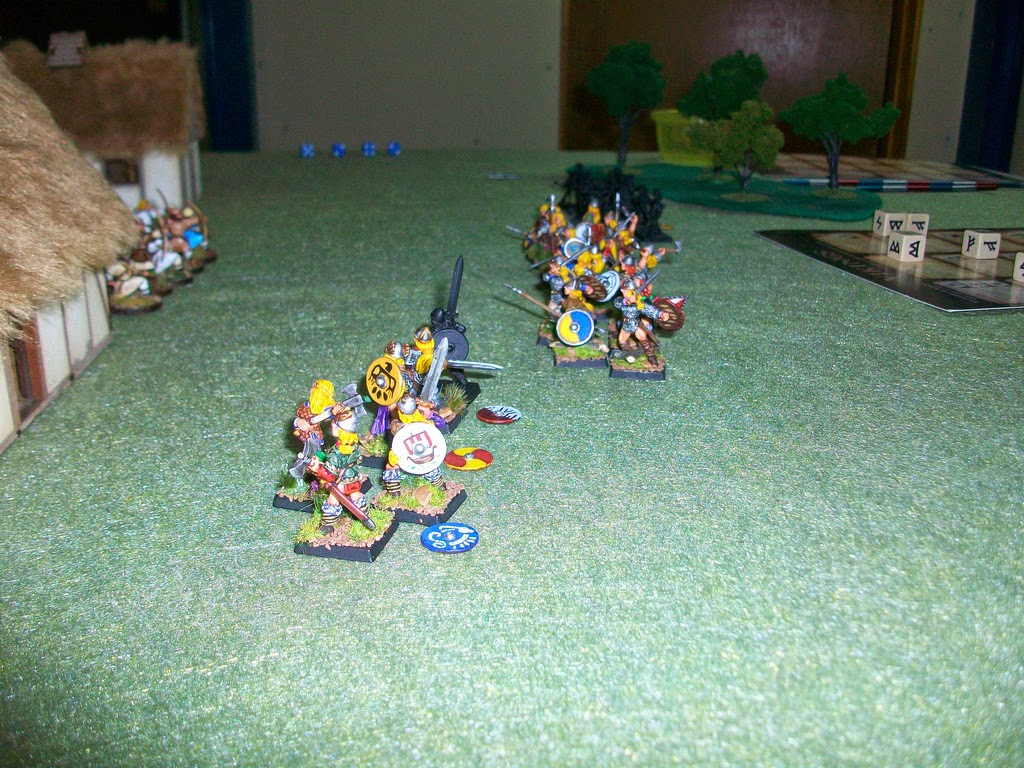 Turn 3 I'm still not quite sure what the Viking Warlord was thinking at this point, but I knew one thing, he was pissed that his troops had been repulsed for the first time against these sally lads called the Anglo Danes, and came full force at the Large building again! For sure there had to be a large reward if they could just take this building they could still cut there losses and sail home with something of a cargo. But it was not to be. He launched his Warlord and 4 figure strong Huscarl unit into the building and my Warriors bravely stood there ground wiping out his Huscarl but losing 5 figures in the process. He then brought in his warriors and took the rest out while losing 3 of his own, but again my Warlord was left keeping him from taking the building and repulsing him once more! On my turn of 3 again I was desperate for reinforcements for the large building and since my bowmen where right next to it and only 10 strong there was plenty of room for them to take up the defense.  Resting them first to take off the fatigue and then slipped them into the building. Also my Warlord had no choice but to rest again from taking a fatigue from the eliminated Warrior unit. But more importantly I was able to set up my battle board for his next assault with Hard as Iron and shield wall.

Turn 4 Now the Viking Warlord was becoming desperate. He had committed everything he had at the Large building and though he only needed to clear two more buildings to win, he erred in not sending something over to the Dane Left to try and at least put pressure on that building. The Dane Warlord was only to happy to comply and started shouting obscenities at the Viking Warlord which infuriated him (I didn't really, this is just for drama) and Viking Warlord launched another all out assault on the tired but stout hearted defenders. This time he brought in his 8 man Warrior unit, and then followed up with his 5 man Warrior unit. The Gods where with the Danes die rolling toward the end of this game, and though the Levy caused light causalities to the Viking Warriors, the more important result was that Vikings only successfully attrition down the levy by half. But it was still a close run affair. The Anglo Dane player, though down a Saga die, used Noble Lineage to convert to a helmet and then re roll two more saga die so he could take full advantage of his battle board by using Hard as Iron and Shieldwall and again was set up for the next round. 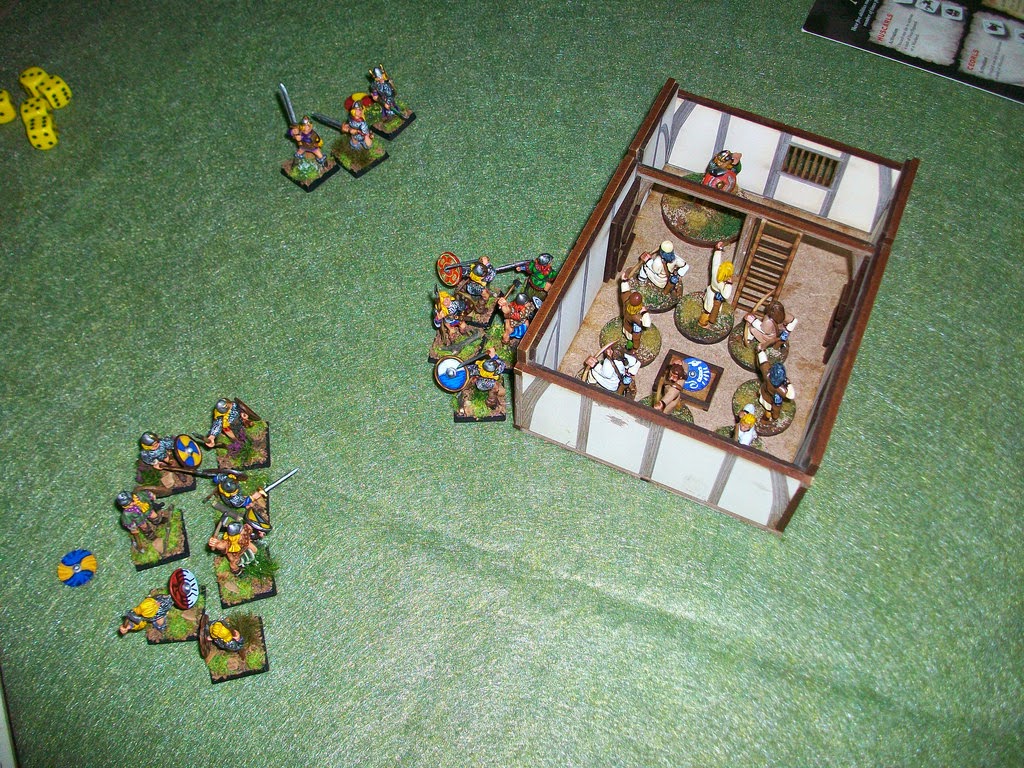 Turn 5 The Anglo Dane still holding on to two buildings, one of which had a fresh 8 strong Warrior unit and not being threatened, it was simply down to trying to win a moral victory for the Viking Warlord by trying to kill my Anglo Dane Warlord once more. But the Gods had turned away from the Viking Warlords vanity and though this time he was able to whittle down the Levy to a figure or two at the end of turn 5, it was not enough for him to have the strength to attempt an honorable death in hand to hand combat. 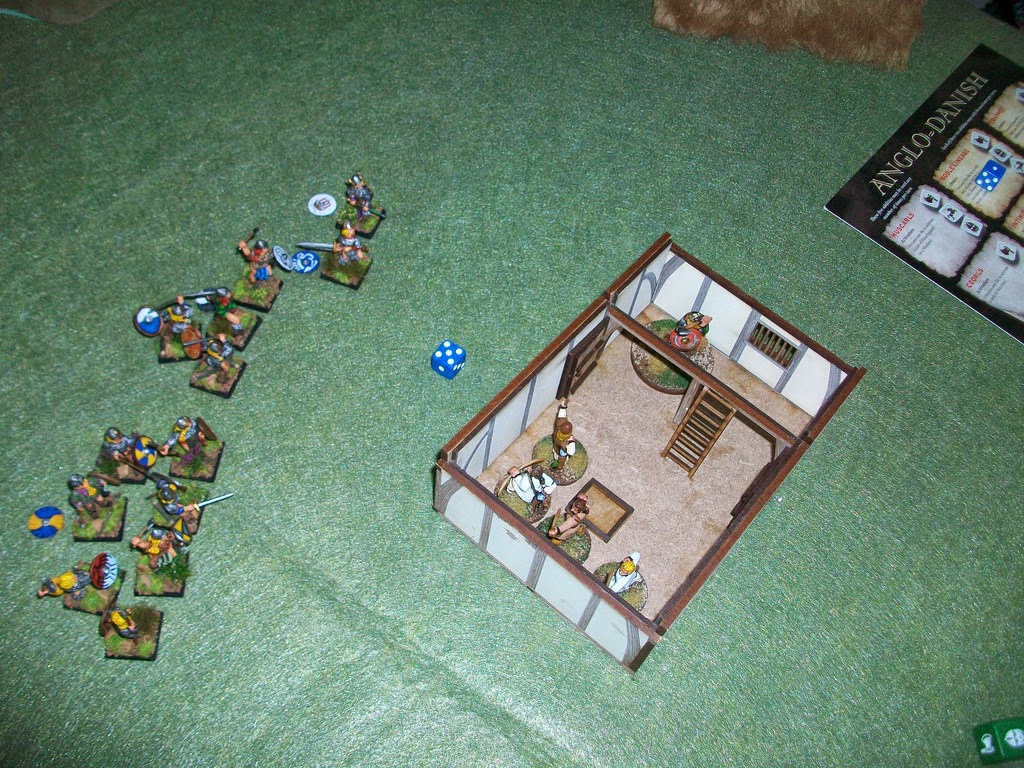 Final Turn 6 The Viking Warlord did his best and was able to finally destroy the Levy but all he could do was come into battle with his Warlord and a couple of his leftover Huscarl. With my choosing of using Helmets I had rolled in previous turn and using Noble Lineage I used the Activation Pool ability once more to my advantage and had set up shield wall and Hard as Iron to be able to defend my Warlord for the last glorious Viking assault on the Anglo Dane position. 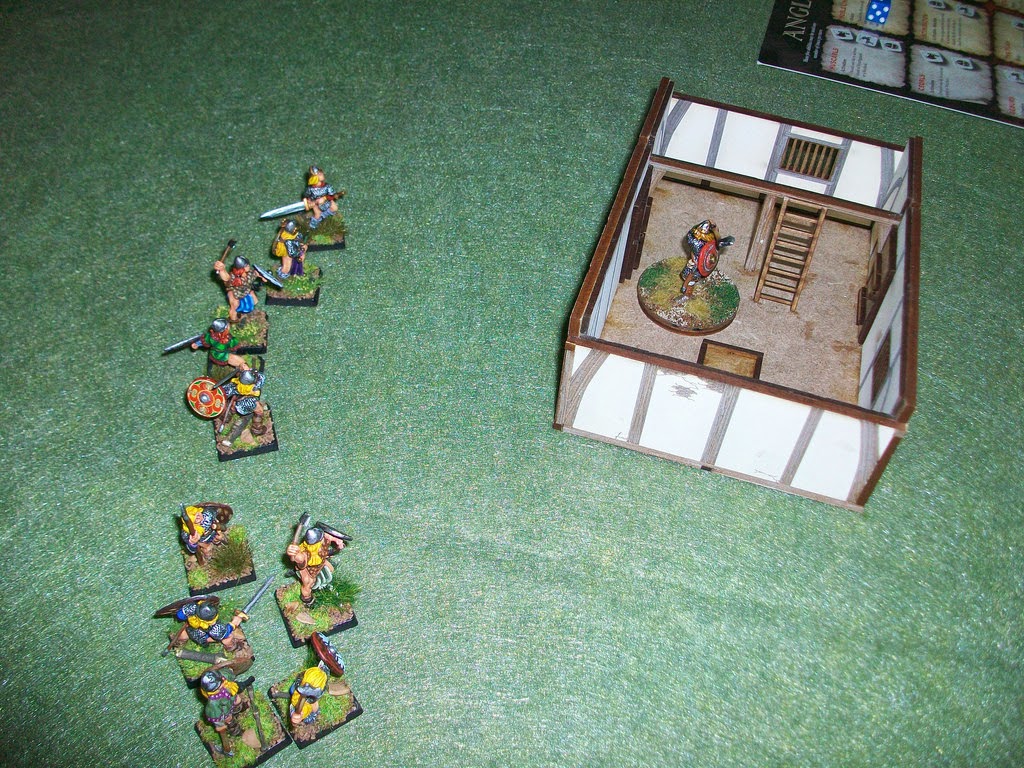 One can gain no greater glory than by his enemies bravery and fierceness. We honor our enemy and bask in the glory he has brought the Anglo Danes. Songs will be sung in the great halls for ages to come.

Until next time we bid you a safe journey upon the seas, and may you always have coin in your purse;)

I finally made it over my psychological barrier of painting my Dane bowmen. Though not the greatest paint job in the world they are finally done and I can, without guilt, move on to other projects. Here is a picture of the completed lads in front of their favorite watering hole, the infamous Japanese Tea house;) 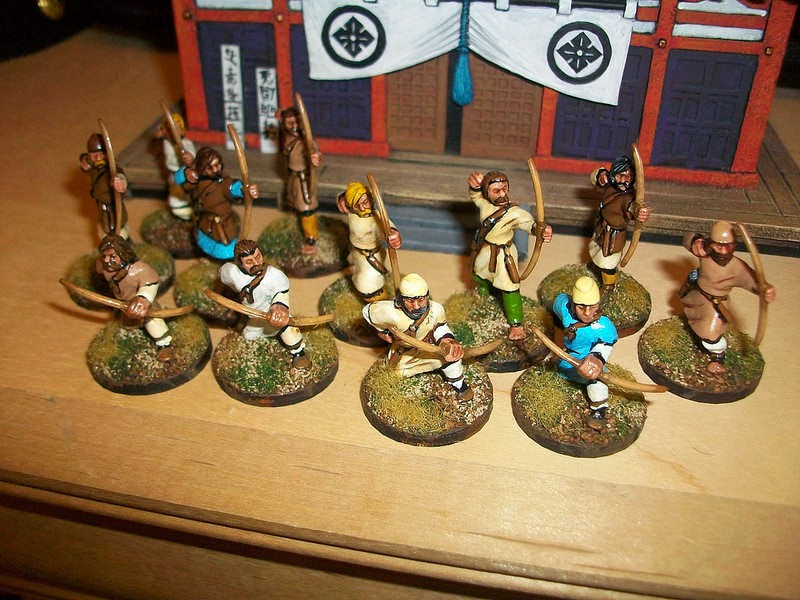 [Click on the picture to see a larger view]
Posted by Kevin at 11:06 PM No comments: