Trying to catch up and finish some me projects. These are my Stealth battlesuits I stopped working on a while back. Last couple of days I've put the finishing touches on them. I tried a new chip effect technique with a little piece of foam dipped in a brown paint and wiping off as much as I could before dabbing on figure in certain locations for that wear look. Got carried away in some spots, but I think it came out alright. 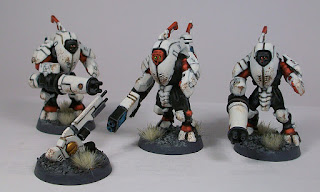 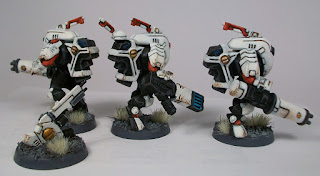 Thanks for looking as always.

Reenactor armed with a wand

Now this little tid bit isn't exactly hobby related, but at the same time it is. After all painting up historical, science fiction, or even fantasy figures is just letting out the little boy, or girl, in us out to play for a bit. So today I took it a step further. Several weeks ago my daughter invited my Wife and I to my granddaughters "Mingle with the Muggles seventh birthday party". So I say to myself, "self you are a very artistic person, and I know you can make this event something special with your artistic talents". Well I won't tell you what I said back (cause then you'll just think I am crazy for having a conversation with myself) but that statement made a lot of sense. So off to the races my imagination went.

First to set this story on the right path I have to explain that my six year old granddaughter (now seven) has been reading by herself the Harry Potter series. A month ago we started reading together "The Sorcerers stone". I would read a chapter and then she would. When my turn came to read a chapter there have been several times when she's had me hold up to correct me when I have mispronounced a word. This truly amazes me and I always get a good chuckle out of it. We are now reading "Chamber of Secrets". But this time she reads along with me while I read it out loud. I think she likes me doing this because I make all the different voices and she gets a good chuckle out of that. Anyway on to the where and why my imagination went in the direction it did.

My granddaughter likes the characters Harry, Ron, and of course Hermione. While my favorite characters are Dumbledore, Hagrid, Snape, etc. Though Professor Snape has to be my favorite as he is such a complex character. So now you know where I am going with this.

Over the weeks I collected the clothes (costume) I would need and came up with several ideas for makeup etc. I needed to do something special that would pull off the illusion that I was in fact Professor Snape and not Papa. My family has never seen me without a beard, nor have they seen me hairless. The easy part here of course is shaving all that stuff off except for one problem, I am a blue eyed, fair skin, red head and something would need to be done about that.

All I needed to do was put on a couple of coats of paint, do a bit of layering, and then an easy dry brush to touch it off. Except that is in the painting world. So I turned to my Wife and had a discussion with her about makeup ideas. I must say without her help I probably would not have been able to pull this one off.

Now the last thing I needed was black hair. Obviously I don't have black hair so I started to browse that evil Amazon market place to look for something that wasn't too expensive and yet would pass to make me look similar to Professor Snape. Some were too short where others would make me look to Gothic. In the end I settled on (would you believe it) a Micheal Jackson wig. It was just a tad short on the actual length needed but I think you'll agree when you see the pictures below it was pretty close.

So after weeks of prepping, making sure I didn't accidentally say anything or leave anything lying about the house for them to see and ruin the surprise, I successfully pulled off the Professor Snape impersonation today. So well in fact I will leave you with this:

As I walked into the party I spotted my granddaughter with her friends and stopped just short of all the partyers. Waiting until I was noticed and hushed whispers started to float around the group I knew the time was right to approach my granddaughter. With a nervous giggle, she slowly backed up toward her mother who also had a look of awe on her face. As my granddaughter bumped into her mother and could go no further I slowly approached closer and her nervous laugh continued. I started to lean a little closer and that's when she looked into my eyes and at that moment recognized those unmistakable blue eyes of her Papa and shouted out Papa and embraced me with a giant hug. It was at that precious moment that she shouted out Papa that her mother actually spit out her food she had stopped eating and said Oh My God, with a laugh and was beside herself in disbelief.

This is exactly the reaction I had hoped for. Mission accomplished. If you've read this far thanks for doing so and enjoy the pictures;) 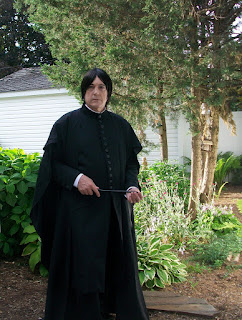 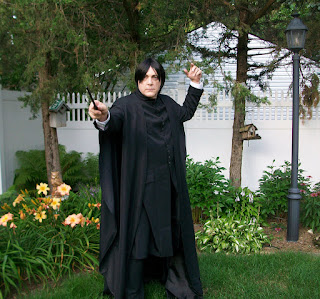 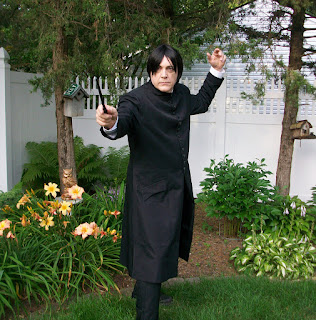 ....and below the wizards test their abilities! 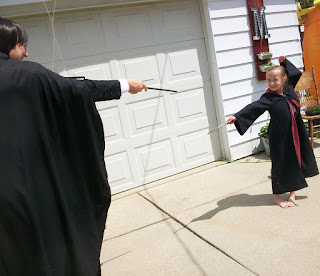 It was hot and windy, and you can see my wig riding up on head 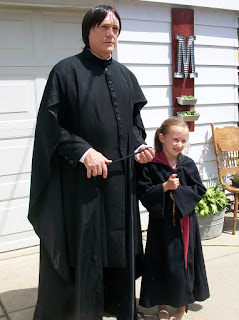 PS
I almost forgot, to complete my authentic recreation of Professor Snape where would I be without his Deatheater tattoo as well!

Well now that I have caught up on a few projects for friends, I decided to do a little something for me. Having a 40K game coming up this Saturday against my friend's dreaded Dark Angels was all the motivation I needed to sit down and paint up a little surprise for him. Grukk Rippa face is an awesome Warboss model that I really enjoyed painting. Though I used a lot more colors than I thought I would on Grukk, the time spent doing so was worth it.

Have a look and I hope you like it. 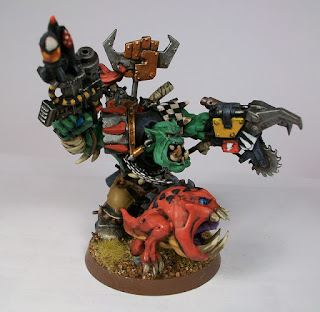 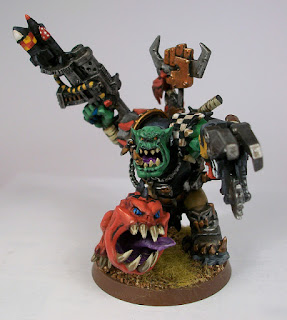 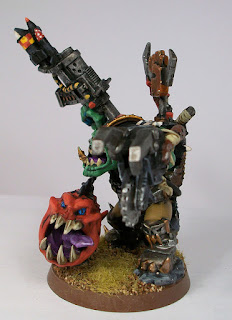 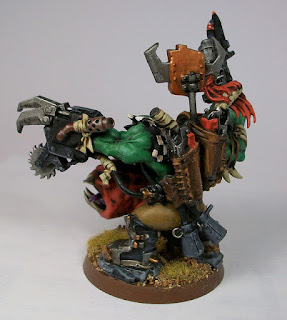 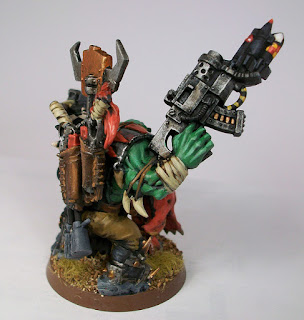 Finally finished the banner which was a pain. Without knowing it I somehow got super glue on my thumb and touched the bloody flag while I was assembling it to the flag pole. When I went to release it, well let's just say some bad words came out of my mouth about how stupid I was. I was able to slowly rock it back and forth and get it loose without ripping it, but I had to mix some colors up and do my best to match the print.

I am not gluing the flag in place (in the following photo's I just kind of stuck it in his hand and did a balancing act) as I am shipping this to my friend. He will also be finishing the base to match with his current army. Other than that I just have to spray some sealer on it, wait till it dries and pack it up. 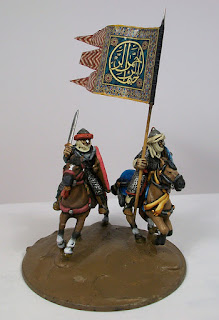 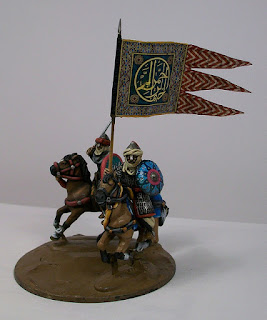 There is just something about the Horus Hersey that reminds me so much of the Roman Civil Wars of ages past. I am very excited about entering this period. It's always a slow process for me, but my Wife has promised a few extra units of this proud chapter to be joining my ranks in August. I do hope this comes true. In the meantime I have plenty to paint. I've given my attention to a few friends projects, but these I have finally caught up on and will be able to work more on this one. This is a Contemptor Dreadnought that I am just in love with. I am taking my time painting it up. It's a resin model from Forge World and resin is not as forgiving as plastic, so I have proceeded at a snails pace on top of doing other stuff for my pals. Here'w what I have so far. 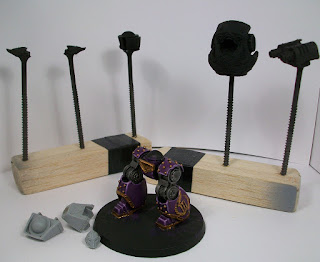 Yes it's not much, but I already have a vision of what it will look like when done. It will be beautiful. Of course everyone's children are beautiful to them (get it, Emperor's Children, my Children.... Okay never mind).

Showcase: A little bit of "I'll be back" love

Been catching up on a few projects I've promised to a few friends. Here is a completed one (yeah I got one done!!!). These are the last five of a group of ten I've done for a friend and will complete his unit. 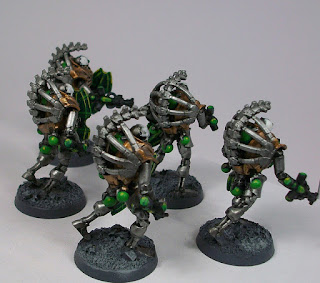 Cheers and thanks for looking
Kevin
Posted by Kevin at 12:24 AM 4 comments:

Some real life issues have placed my hobby in the back seat for a bit, but not completely. I've been keeping up on my favorite blogs and doing some light painting so as not to go completely mad. Most of all I've been trying to get some painting done for friends I have promised for them, so here is one of them in a Moor Warlord vignette for the popular Saga game system. I have not completed the base on purpose so that my friend can match it to his Army with his material. I used liquitex matte gel to build up the base. On hindsight next time I will use a different material as this took forever to dry, probably because I applied it pretty thick. I saw a picture somewhere in an Osprey book of a leader on a small rise with his banner man on a horse slightly below him. That's what I was trying to accomplish with this one. I have yet to place a proper sword in the hand of the Warlord, and make the banner for the other. But it's pretty much done. 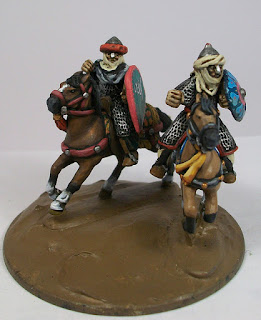 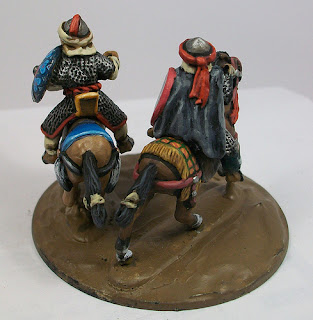 I've worked on a few other projects, but will post separately for period reasons.