"In compliance with President Lincoln's requisition upon the State of Michigan for military aid to uphold the constitution and maintain the Union of the States, Governor Austin Blair issued a proclamation, dated April 16, 1861, for one Regiment of Infantry to be mustered into the service of the United States.
At this date there were a number of independent military companies in the state possessing military knowledge from long practice and study. Ten of these companies were accepted to form the First Michigan Regiment. Those companies accepted were designated at their home camps as the "Detroit Light Guard", the "Jackson Grays", the "Coldwater Cadets", the "Manchester Union Guards", the "Stuben Guard", the "Michigan Hussars", the "Burr Oak Guard", the "Ypsilanti Light Guard", the "Marshall Light Guard", and the "Hardee Cadets". Orlando P. Wilcox was appointed Colonel of the Regiment and the companies were ordered to report to him at Detroit with the least possible delay.
The organization of the Regiment was completed on April 29th., being mustered into the Federal service on May 1, 1861 with a total enrollment of 798 men. The President had called for these troops to serve in Federal service for three months and they promptly complied."

The above is a excerpt about the "1st Regiment Michigan Volunteer Infantry" from a website called Michigan at War. Today I had the privilege of attending Historic Fort Wayne in Detroit for the 150th Civil War commemoration. As it was told by the speaker of the day, we don't call it a celebration as the nation was plunged into a horrible war, instead we call it a commemoration to honor those (on both sides) who fought and died for their beliefs 150 years ago.

Michigan only had a population of around 750,000 in those days, and yet raised around 30 regiments for the Union of around 90,000 men. That is something in itself. I was only aware of this special day because I have a friend who is a Civil War reenactor who happened to mention the event that I took part in today as an observer. I must say I had a grand time seeing the volunteers of the 1st Michigan mustering at Fort Wayne and it was like stepping into a time machine and going back all those years. You could tell they took pride in their hobby as everything was quite authentic from the uniforms right on down to how they served chow etc.

Another unit taking part in today's commemoration was Michigan's 102nd USCT Co. B (United States Colored Troops). The original regiment was created in July 1863 after an extensive editorial and letter writing campaign by Henry Barns who was then the editor of the Detroit Advertiser and Tribune. It originally was called the 1st Michigan Colored Regiment and retained that name until it was officially mustered into federal service. At that time it was re designated the 102nd United States Colored Troop (USCT). For his efforts Henry Barns was commissioned the regiment's first Colonel, a post he retained until voluntarily stepping down in favor of a regular army officer. The audience learned today that this unit's regimental flag was being preserved as part of the save the flags, a program that was launched on July 2, 1991, to help save nearly 160 fragile, battle-torn Civil War flags that had been displayed for decades in the Michigan State Capitol rotunda.

There is much more to be told of the colorful histories of the Michigan Regiments that took part in the Civil War all those years ago, but I will allow the reader here to research further if they wish too. The following photos I took at the event are posted below, and as always thanks for stopping by and allowing me to share some of my interests with you. 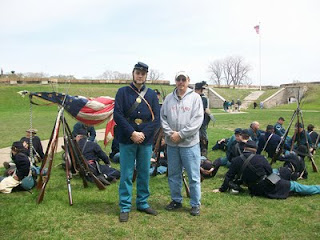 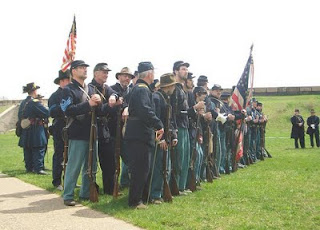 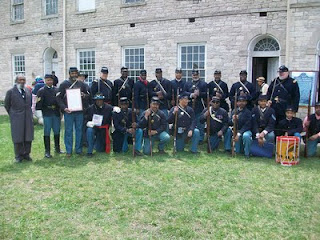 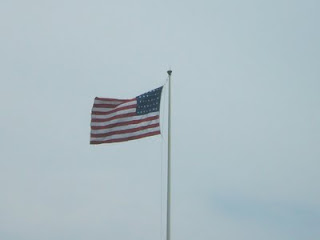 I sit here relaxing, not bored, but wondering why I lack motivation to pick up that paint brush, or bottle of glue to work on some of my projects I started months ago. For those of you that have peeked in, from time to time, will know that I am working on some 1:35th scale Germans, British, and their allies during the battles for Monte Cassino. At around the same time I started putting together a 1:400 scale Uboat. But alas even though it is rainy, overcast, and just down right ugly outside (keeping me from doing some cycling) I find myself sitting in my comfy chair unable to will myself out of it to play with my toys (so to speak).

What I have been able to do since I've been home from my business trip, hobby wise, is catch up on my reading. So I have decided to give a review of some of the books I have completed reading. Mind you I am not a professional at this and it is only an opinion of my own tastes and likes. 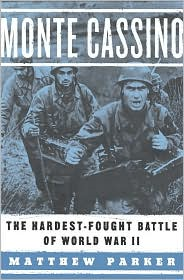 I found this book well written and easy to read and it is apparent that the author has done his research well. My only wish would have been for some better, more detailed maps which would have kept me from having to reference elsewhere.

The author sets up the battle of Monte Cassino by quickly covering what led up to the battle. He goes over the Casablanca Conference, the invasion of Sicily, the invasion of Italy, and the general campaign up to the allies (i.e. USA, Poland, Britain, and her commonwealth friends) grinding halt at the Gustav line (prepared German defensive positions). The author then goes on to describe the battle, not as a single long assault, but as a series of four major battles for Monte Cassino and surrounding area. What I liked best about the book is the authors first hand accounts from the soldiers (on both sides) and the civilians that were there on the ground. From letters of those that did not make it, to the survivors amazing accounts of the utter harshness of the terrain and the brutality of war. The author also describes the often forgotten impact that war has on the civilians, the moral and economic effects, as well as the interactions the various nationalities had on the civilians.

I was also amazed at how Allied high command was so disconnected from what was actually taking place on the front lines. From the lack of understanding of the terrain by the commanding generals and how this led to the hopelessness of the early allied assaults, to the controversial bombing of the Monte Cassino abbey. From the soldiers personal first hand accounts the author places the reader right at the front lines and you can't help but feel the hopelessness the soldiers felt at these ill conceived or poorly executed plans.

What touched me the most about this book after reading it was the post script at the end of the book entitled "Surviving the Peace". If you have ever experienced war first hand, or had a loved one survive it, I think it an important summation of how our loved ones go off to war only to come home changed forever.

If you have any interest in WWII I believe this to be a must read, and an important addition to ones library. The author successfully sheds new light on one of the least known battles and it's high cost in human lives.
Posted by Kevin at 7:43 PM No comments: