After having collected Infinity miniatures over the past eight years and having done nothing with them, suddenly, I painted up a few because of a friends recent interest. I guess it always helps ones motivation when a friend goes "oh wow, those are cool" then immeaditly dives into it. Not only did this friend go and buy some stuff but he painted up three models quickly which had me painting up some so we could play the first game of Operation: Icestorm. Last Friday evening we got a chance to get together and play a few games of the first scenario in the book called "Mission 1: Perimeter Control. First game took us about 40 minutes because we were rechecking what we thought we knew about the rules. Once we had a firm grip on the rules after playing the first game we played two more in less than 30 minutes.

It's just the basics, learning how to move and shoot etc. but our overall impression of the system was positive and we are both excited to continue painting up these beautiful models. Not only was it a success but two more friends have since bought stuff and are motivated to start playing this system.

Wow! After eight years of having these things and having resigned myself to having to paint up a bunch of factions so as to get my friends to play, magic happens and suddenly I can paint the factions I have for myself as I have a grass roots interest movement happening among my friends. So it is a win win situation for me.

Here are a few photos from our first game, the buildings and mat are paper products, but they are nice. With a low investment we were able to paint up a few models set up some of the terrain that came with the game and figure out if we wanted to invest further and buy model buildings and more figures.

A game system that I highly recommend trying as you don't have to paint a lot of figures to start playing right away. 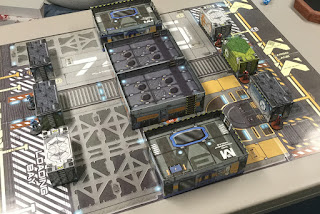 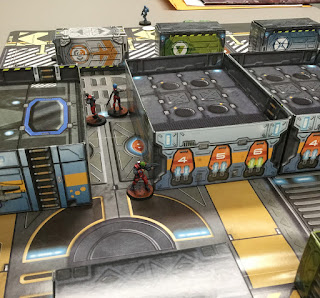 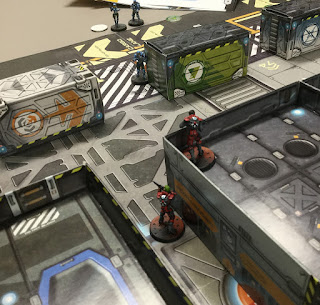 I've had Operation: Icestorm set for a little while now and this past week I got the Art book from one of the painters I admire very much "Angel Giraldez". He works for Corvus Belli which produces "Infinity" figures and is head of their painting department. He also does work for the painting company "Vallejo" and tests their products and arranges painting sets etc.

Though he is only one of the several painters I follow, Angel has a special place in my heart. He basically stumbled onto the painting scene in 2002 or 3 and this from watching an ad on TV! I've been painting for quite a bit longer than that and to see him just pick up a brush and go like he does is just amazing to me. He is the "Tom Brady" of the painting world.

I probably will never be as good as Angel is but one thing he does for me is make me want to try. So these last couple of days I looked at the art book and a few online pictures as well and gave it a go at painting up three grunts for a game I will be partaking in this Friday. It's a learning scenario from Operation: Icestorm and the rules are a read to here stop play a game type, then next scenario adds a bit more and so on until you've learned the basic system.

My first foot soldier I have painted here for your viewing pleasure is a black soldier fighting with the Alguaciles. I was very excited to try as it was my first attempt and I really enjoyed doing so. I still have a bit to learn in getting the colors just right and blending. Here are a few photos of my first soldier. 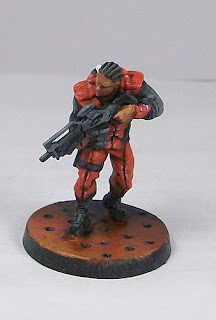 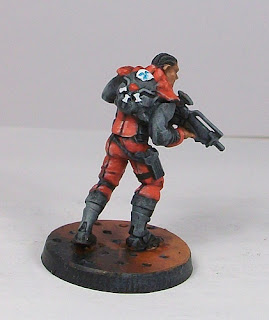 I went with a more orange-ish red than what Angel describes doing, and I did all the work by brush as I don't have my new airbrush yet. Though that's another story.

My second soldier looks like a hard case punk rocker and I just dig his hair cut. This guy was a blast to paint as well. It's not often I get to go off the beaten path of historical's and paint crazy hair. Here are a couple of shots of my second soldier. 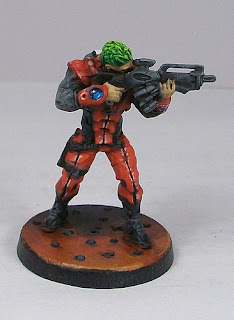 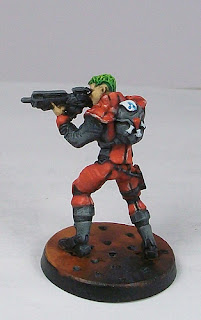 My last soldier is a woman. Infinity, understand, is an anime based science fiction story line and with that you have, well, women that are all anime looking, for lack of a better word. I had fun painting up her hair as well, and though I am still working on the basics of doing faces well, thought I did a pretty decent job on hers. The last photo I tried to show a closer look. 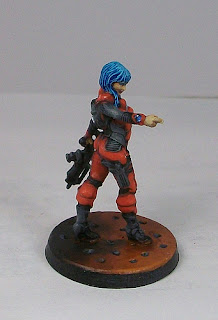 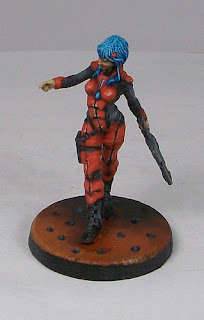 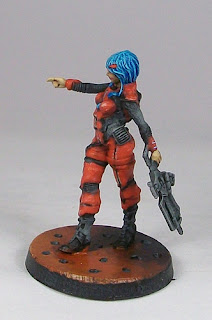 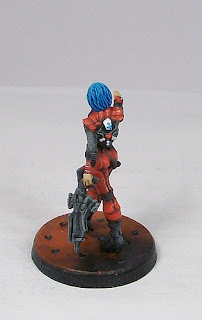 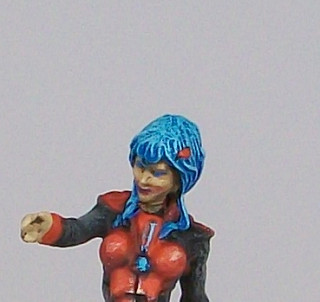 It's a simple color scheme but lots of subtlety and I still have a ways to go in learning proper blending (and patience), but they are gaming figures and I am not trying to win a competition, though I am finding painting now a days is just as fun to me as gaming.

Thanks for looking as always
Cheers
Kevin
Posted by Kevin at 11:22 PM 8 comments:

You may remember a while back that I was working on this little fella and totally botched it. This led me having to ask my friend about his trick of soaking it in pine-sol to strip it. I gave it over to him and it worked beautifully thus saving the little guy from being thrown in the trash and saving me a few bucks as Infinity figures are not cheap.

Well I finally got around to finishing it and am happy to present it here to you now with a little better paint job than I did at first. Hope you like it. 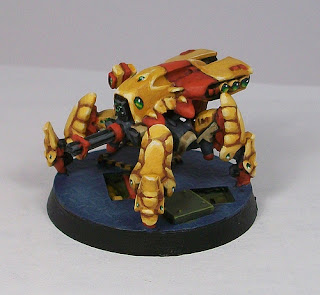 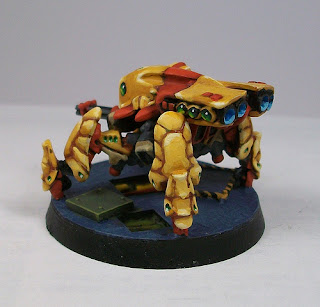 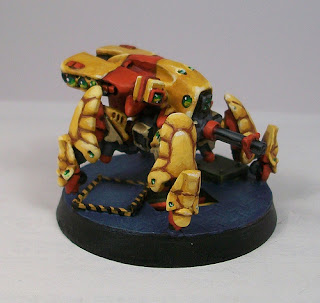