I've got several paint projects going on at the same time, but when do I not (I am saying this to myself and shaking my head). Right in the middle of painting up another Roman unit I completely stopped. I needed a change of pace, like right now. This was probably inspired because I played another game of Infinity with my friend Rob and got the juices flowing for painting up some more stuff for me. Then a pang of guilt swept over me as I realized I still needed to paint this bloody Onyx box Army set my poor friend Al has been waiting patiently for.

Now mind you Al has not been pestering me. He knows I will paint this up for him before one of us dies.... good grief I am knocking on wood this very moment... but I am sure he would like them waaaayyy before then.

So I painted up a leader type so he could at least start playing a few introduction type games with Rob and I. I think my last post was I had like 9 something to paint for him. Well Al, it's now 8!!! Yes!!!! It's only been since April that I painted the other three. At this blazing pace you'll have them before you start collecting social security!!!

Here are a few photo's. I am not totally satisfied with my work, but what artist is. Hopefully the next one I do will be better than this one. I think with each of these figures I'll get a little better with as I go. 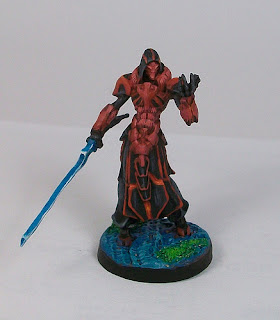 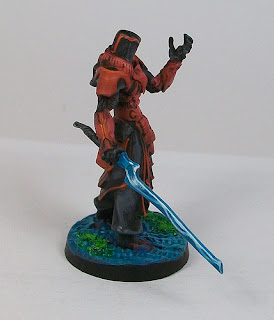 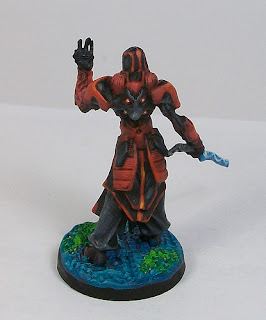 As always thanks for looking.
Cheers
Kevin

The Tiger tanks of ancient antiquity

The two armies had drawn up into battle formation in the predawn hours. As the sun began to rise over the soon to be battlefield, the beams of the morning light reflect off the armour of what look to be a group of giants on a low hill. The enemy foot soldiers begin to mumer and point in their direction. What are these metal looking behemoths? As the sun slowly drew higher into the sky, the light bringing more details into view, they could see that they rode large metal clad horses and carried spears that seemed as tall as trees, they swore to each other that their eyes gleamed with red, fear began to sweep the enemy ranks....

My latest addition to my growing Late Romans from the Saga supplement Aetius & Arthur are the "Equites sagittarii clibanarii". Sagittarii implies (but does not establish) the unit was bow-armed, while clibanarii may mean something like "oven men", possibly alluding to the stuffy conditions clibanarii troopers had to endure due to their unusually comprehensive armour. The Equites sagittarii clibanarii is the only clibanarii unit in the Notitia (The Notitia Dignitatum, latin for "The List of Offices", is a document of the Late Roman Empire that details the administrative organization of the Eastern and Western Empires.) stationed in the western half of the empire. From what I am reading they were stationed in Africa, which matters not to me, as they easily could have been called over to Italy to fight for some general contending to be the next emperor of western Rome.

There is much debate and little evidence to prove or disprove what weapons they carried or how much armour may have been worn etc. There is debate that the Late Roman Cataphractarii was armed with contus and sword and did not use a shield, while the Clibanarii were armed with the contus which is wielded with two hands, however consideration must be given to what other weapons may have been used by the clibanarii, the bow and shield.

Which brings me to, if they did carry a shield, what color do I paint it. Again there isn't just one source and there can be 15 variations of the same shield pattern, so I simply chose one I thought I could paint freehand as my hand is not that steady to paint fancy shield designs.

So with this all said, I am presenting to you my interpretation of what my artistic tastes, and idea of what my unit would look like. Close to history, or fantasy? I do not know but I have done my best to research what I wanted and present to you my Warlord, and his hearthguard Clibanarii. 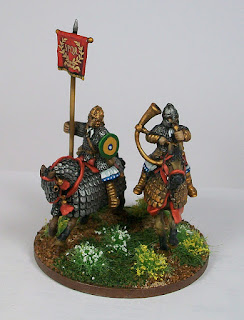 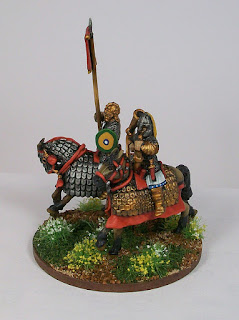 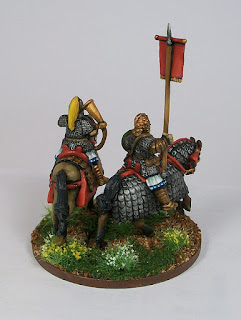 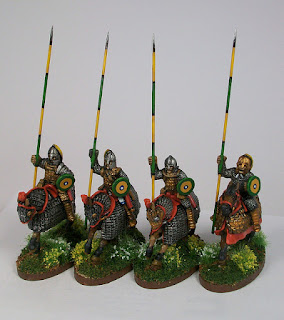 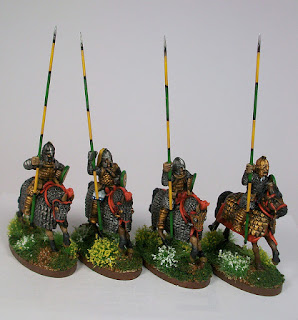 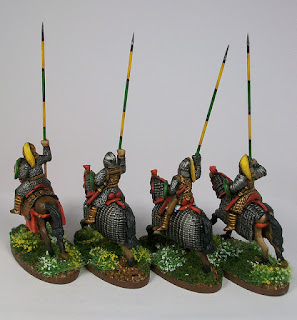 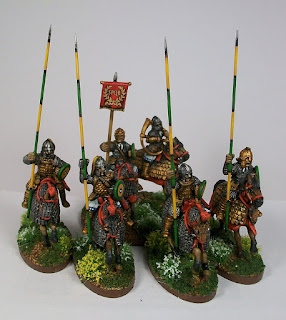 The figures are 28mm from Gripping Beast, the shields painted by me, the banner is a transfer from little big men studios.

Based on shield colors the horse tails worn from their helmets could be of varying colors, I chose yellow, which keeps it in the ball park of possibilities.

Hope you like my work. More stuff on the way soon.

It finally stopped raining long enough for me to brave the chilly weather and get outside so I could spray a couple of protective coats on my second completed Late Roman infantry unit. I have about 4 more units plus my Warlord to complete to finish the project, but while I waited for the seal coats to dry I was not idle. Started working on a cavalry unit and my Warlord.

As mentioned in my other post these are Gripping Beasts 28mm Plastic Late Romans. The shields have transfers applied from Little Big Men Studios. One thing I will mention is if you buy the plastic kit and want transfers make sure you look at Little Big Men's Plastic Late Roman shields, because the ones made for Gripping Beast metal figures won't work. Also the blue shield edging is me matching up colors to complete the look.

The one thing that I really don't like about the kit is the fact you only get 8 dudes wearing chain mail. I really wish they would have made at least 16 out of the 44 but oh well, I'll make it work.

Hope you enjoy the photo's. 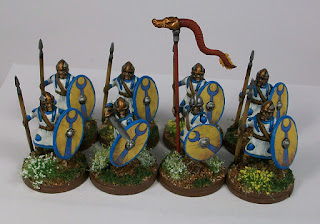 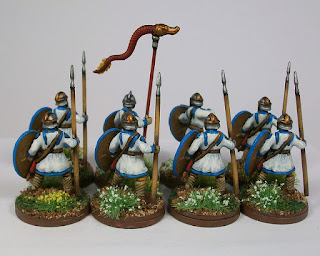