Got a chance to sneak in a few paint strokes on my terrain pieces today. The browns are done, and I have picked out the rocks in black that I will now paint grey and then do some dry brushing on them to make them pop. Then it's the static grass placed in a few spots and I will be done with bases. I've gotten out my trees I am going to use and figured out how to separate them from the bases they are on now without destroying them to place them on these new bases. More pics later. 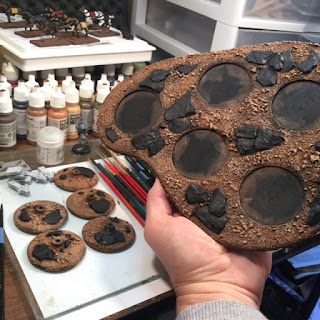 28mm Terrian for Saga (or other systems)

Been cleaning up and reorganizing hobby room to a standard of chaotic order, instead of Chaos rules and things are disappearing into the warp. Well I'm still deciding what I want to paint or what I have to paint, and then a thought hit me. Why don't I have any nice terrian pieces? Well what it comes down to for me is that it's boring and takes up my time painting figures. So I ask myself if I am going to take the time to paint decent miniatures wouldn't I want them to look nicer next to a nice painted piece of terrian instead of felt? Of course I would.

Well a friend of mine (Skip) showed up to CincyCon with some really nice terrain pieces he had picked up from Worldsmith Industries and I just loved them. Now I know my friend probably told me beforehand about them, but it must have went in one ear and out the other. Seeing them in person though got my attention.

I picked up three different size forest bases along with some tree inserts, and whats really cool inserts if you want trees out of the way. This makes them multi usable in Saga for Woods or rocky ground. We all know permanant terrain pieces are lovely but sometimes you want to move a tree out of the way and these nicely made resin pieces from Worldsmith Industries fit the bill for me.

I ordered through this gentleman and was able to pay for it using Pay Pal and three days later, bang they show up on my doorstep! Can't beat that service. Having them in hand and looking them over you have your typical air bubble here or there, and some resin that needs to be cut or sanded from the mold, but I have to say I really didn't have to work that hard to overcome this. I am really pleased with the product. I especially like the textured terrain as I can use dry brushing techique to make them  look really nice with little effort.

As Worldsmith says you need to wash them with mild detergent to get the mold release oils off before you prime them. Here are a few photos of what I have done so far. 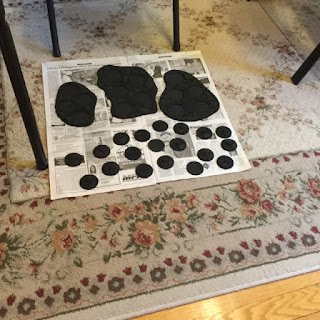 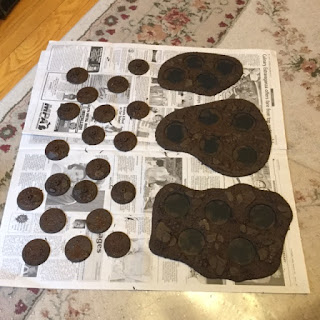 As I go and finish them up I'll post some more pictures of them up close so you can see the detail of the resin piece better.

Well two straight weekends of miniature conventions have left me a little burned out. I've been kind of in a fog, but I did do a little reorganizing of my very messy hobby room. Haven't felt much like painting but finally did sit down today and was pondering over what I might do next and this little fella kept saying me, yes me, paint me! It's Grukk Face-Rippa, one bad ambré of a Warlord for my Ork boyz I've been slowly accumulating. He's looking pretty good and I love his little pet attack Squig. Hope to put some paint on him tomorrow, I'll post progress as I go.... 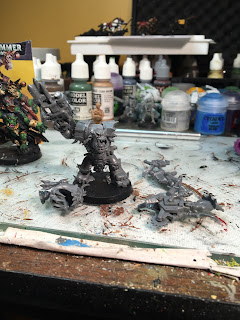 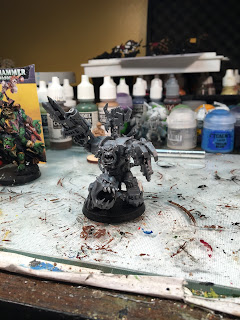 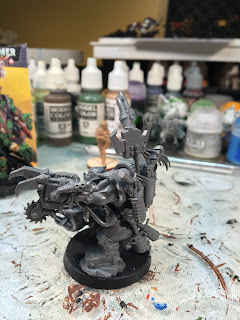 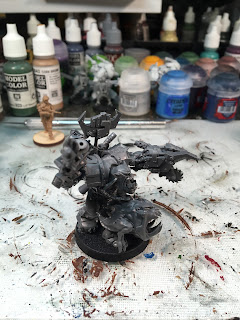 Cheers
Kevin
Posted by Kevin at 12:47 AM No comments:

My lords, my ladies, and everybody else here not sitting on a cushion! [My favorite movie quote from “A Knights Tale”]

CincyCon has come and gone and I believe the Saga tournament was a success. We had 12 openings and 6 showed up, but had a pre register showed up it would have made it 7 and I could have played to make it a nice 8 player tourney. But in the end I was happy for my first running of a tournament to be free to answer questions.

As mentioned this was my first running of a tournament and I am far from being an expert at the rules system but felt experienced enough at it to be able to be a fair umpire if needed. At first I didn’t know what to do with myself as I was excited about it all (and really wanted to play and my ADD was running rampant) so the first round was me learning not to bother the players UNLESS they actually had a problem. As the tournament wore on I figured it out and learned to stay out of their way unless called upon.

There were 3 rounds played, and the ones played where:

“Fight for Control” a battle from the “Random Saga Battles” (version 3.0) by Ray Trochim. This one has you playing for 3 objectives, the one controlling the most at the end of the battle winning the game, otherwise a draw. The game could end at the end of turn 5 on a 5 or 6, but I modified it to absolutely end at the end of 6 for time reasons.

“Clash of Warlords” from the Saga rulebook.

Finally the last round would have been “Assault at Dawn” from the C&C book but due too time constraints (two of the players had to be on the road by a certain time) I changed it at the last minute to “The Warlords” from the “Random Saga Battles” (version 3.0) by Ray Trochim. This one is played like “Clash of Warlords” but with a very important twist. Two objective markers are placed within L of each other at exactly the center of the table and beginning on turn 3 each player at the start of his turn has to check to see if his Warlord is within M of one of the objectives or loses the game.

The Warlords and their followers where:

The action was hot and heavy throughout, and four players where still in it to win during round 3. Skip (Spanish Player) could have seized the day and only needed a win to be the only 3 – 0 player in the tournament but was facing a very good Norman player in Jeff and like an expert swordsmen he made a rapier like move that caught Skip by surprise and took out his Warlord thus ending his chance for Victory, and that on turn 2 no less! Great move Jeff, well played!

Now Jeff was in the driver’s seat depending on what happened between Mark and Brain (both our Viking players). Jeff needed Mark to win to have same record but needed Mark to win quick to keep his slaughter point level down (that was the tie breaker). Brain just needed a win to take it all and would finish 2 – 0 – 1.

What happened in that final game was exactly what you would expect between two hot headed Viking Warlords, they gladly embraced in the kiss of death sending their troops forward with shouts of no prisoners! Jeff's chance of tournament champion faded away as the Viking players ground each other down to dust. Going the distance and both having only a handful of troops left on the table. When it came down to a final count Brain just edged out Mark and became CincyCon Tournament Champion.


I might point out that Rob not only drove with Mark to this lovely convention, but then had to drive him home and listen to Mark yack in his ear the whole way about how he lost EVERY game, like he would forget it somehow;)

Prizes where provided by my group with 1st place getting a Welsh 4 point army from Gripping Beast, 2nd place got Welsh hearthguard from Gripping Beast, and third place ( which would have went to Skip but we provided the prizes so he abstained) actually went to the 4th place finisher who got the Saga Expansion “Varjazi & Basileus”.

Gripping Beast themselves provided some cool swag for the group, a baggie with a random soldier from their line in it as well as a cool pin button with symbols from the game or the name gripping beast or name Saga. Thank you Gripping Beast!

Skip (being a handy guy with saws and wood) made a special measuring axe that had all the measurements that where needed for the game. It’s really cool, and it’s really handy. One stick to rule them all as someone once said. He made enough for all the players to have a little more swag. He Also made our Saga banner for all to see. The gaming boards where made by Mark and myself just weeks before the Convention and they worked out really well.

In the end Skip, Mark, and Rob should get special mention for without them I never would have been able to pull this tournament off. So thanks guys.

Here is a photo-op of the group at the finish of the tournament and I would like to thank them all for participating and their gamesmanship.


[Standing from left to right Skip, Jeff, Brain, Rob (the Godless), Dennis, and Mark (the Merciless), sitting would be yours truly] 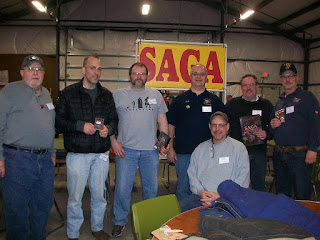 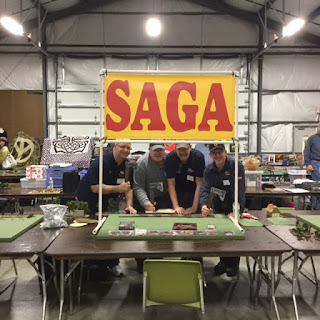 Finally some action shots of round one. 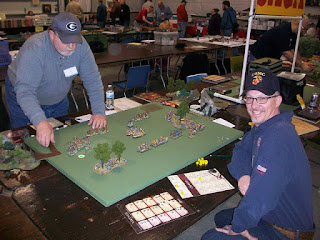 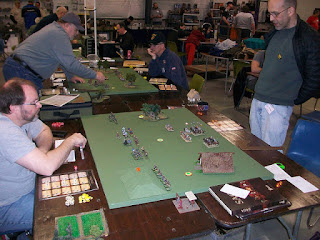 [Dennis and the headless Rob, sorry about that Rob] 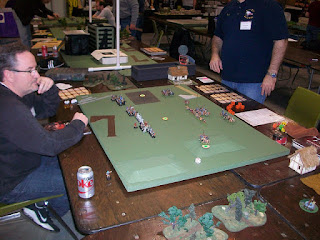 Well that's it, and if you like what you see come on out next year to CincyCon it's the best time I've had at a convention in quite a while. Very well run show, friendly staff, and the ladies in the kitchen where awesome!

Well I did it! I finished the last point of hearthguard I needed to complete the Rus Princes for the Convention that is in just two days travel time. Now I am packing them into the car so I won't forget them. I can forget my extra pair of socks, or even my tooth brush, but god forbid after all this work I forget these lads after all the work done getting them ready!

Again I was scratching around for shield transfers to put on them, and had to borrow a few from another range, sad, but I think it is still effective. I could always get the right transfers and work on them in the future. 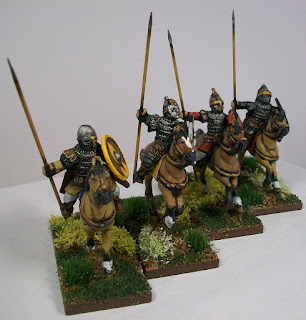 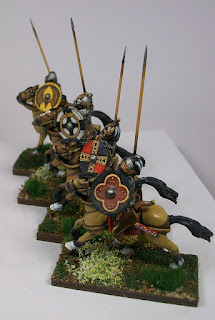 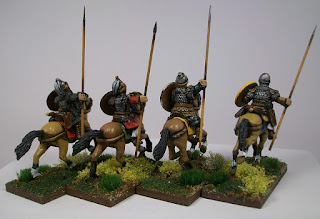 Thanks for taking a peek