Finished my first unit for my new Saga warband. It's from the Saxon list of Aetius & Arthur and it's all foot, which means lots and lots of painting still to be done. Here are some pictures of my first Warrior class unit, a Geoguth based unit (which means youth or the younger lads still learning the trade). They would mostly be armed with a buckler for raids, used as an offensive weapon and would only use larger shields later. Spear would be their primary weapon with a knife or short short for their backup. Mostly would have no armor and be mostly helmet-less but for some reason Gripping beast packed these. I mostly like the figures other than I have no idea why the pose with the dude charging with his knife drawn has not taken the time to think, "Oh yeah I have a perfectly good sword still sheathed, why am I doing this again?". Anyways I need every figure so he got painted up.

Remember to click on the photos to see a larger view. 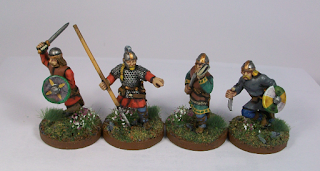 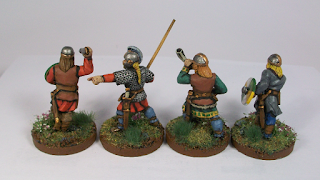 Above 4 including command figures 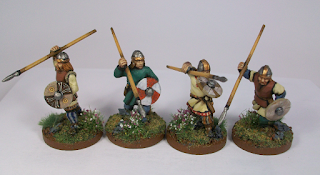 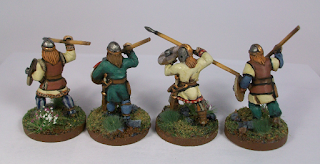 ...and the rest of the dudes who make the bulk of the army