Howdy folks! Real life threw me a curve ball this past week and I just haven't had a chance to sit down and relax with the toys. I have picked out a few model kits I am going to use for the project and have posted a picture of them below: 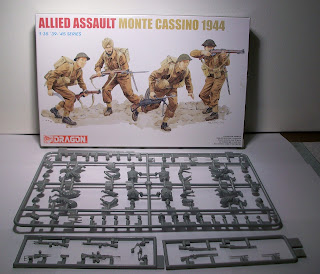 Model number 6515 Allied Assault Monte Cassino 1944 from Dragon. The set can be adapted to suit New Zealanders, Poles, Indians or Gurkhas. It features three head options for each of the four figures. They include Caucasians, Sikhs and Gurkhas. I really, really like this kit! Dragon has impressed me not only with quality in detail but very light mold lines that are easily sanded away. Though I have not built this one yet, every kit that I have so far from Dragon have fit together smoothly. I also like the fact that they can be easily modified. 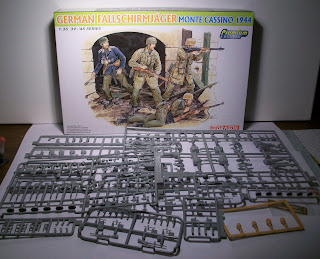 Model number 6409 German Fallschirmjager Monte Cassino 1944. This is an older kit that I believe is no longer in production but can still be had on Ebay or still on a local Hobby Store shelf. Nice poses and tons of weapon options come with this kit. You also get some photo etch parts like rifle slings and sites. Will see if I get that carried away, I don't think anyone gaming would notice me not putting them on, but hey you never know. 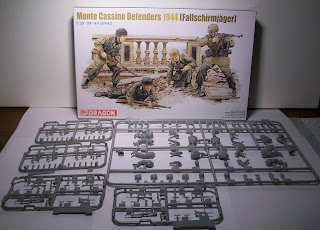 Model number 6514 Monte Cassino Defenders 1944 Fallschirmjagers. This is Dragon latest kit and has some slightly different poses. Nothing fancy but you do get some nice weapon choices. 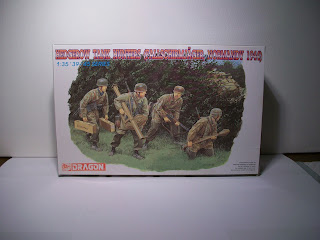 Model number 6127 Hedgerow Tank Hunters Fallschirmjager Normandy 1944. Yes it doesn't say Cassino but that doesn't matter. The uniforms are the same and I am only using a couple of figures from the box for different poses.

I have a list of wants and this will include Mortar teams, Mule teams (yes mules), etc. to fill out what I will need for small unit skirmish action. I am especially looking forward to getting some of those kits with mules as the terrain and weather in this theater was just atrocious. Supplies had to be carried by mule or porter to the front line troops as there were no roads, we are talking paths or none at all and having to climb. Grenades especially were in high demand and the troops went through them in this type of terrain like crazy.

My next post will discuss the paints and some of the ideas/methods I will be using to build and paint the figures. Then the assembly line will begin in earnest and hopefully I will have the focus and drive that will be needed to carry through.